Richard Kelly illuminated some of the twentieth century’s most iconic buildings: the Glass House, Seagram Building and Kimbell Art Museum, to name a few. His design strategy was surprisingly simple, but extremely successful.

Lighting for architecture has been and still often is dominated by an engineering viewpoint, resigned to determining sufficient illuminance levels for a safe and efficient working environment. With a background in stage lighting, Kelly introduced a scenographic perspective for architectural lighting. His point of view might look self-evident to today’s architectural community, but it was revolutionary for his time and has strongly influenced modern architecture.

Read more about Richard Kelly’s remarkable, and unsung, contribution to architecutre, after the break. 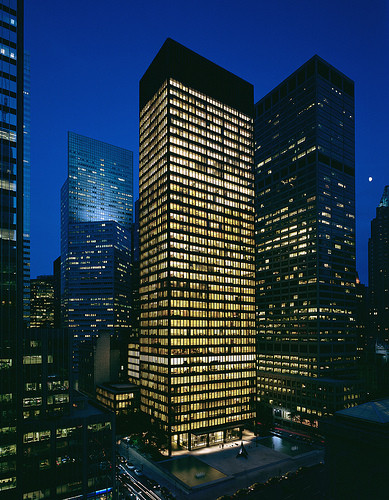 One of Richard Kelly´s first significant works was the renowned Glass House by Philip Johnson in New Canaan. The challenge for transparent architecture, which was gaining popularity with the rise of the International Style, was the clear glass itself, which at night turns into a mirror, reflecting the interior lighting. By minimizing the interior lighting and illuminating the surrounding lawn and trees, Kelly restored the continuity and flow from the daytime into the night.

In his College Art Journal essay "Light as an Integral Part of Architecture" (1952), Kelly summarized his theory of lighting, which was greatly influenced by perception theory, stage lighting principles, and light effects found in nature. To this day his terminology is used to describe the conceptual background for numerous lighting solutions, particularly his concept of three distinct types of lighting : "Focal glow, ambient luminescence and play of brilliants" .

"Focal glow" is for Kelly a way to point out important elements, as he explains:

"Focal glow is the follow spot on the modern stage. It is the pool of light at your favorite reading chair. It is the shaft of sunshine that warms the end of the valley. It is candlelight on the face, and a flashlight on a stair... Focal glow draws attention, pulls together diverse parts, sells merchandise, separates the important from the unimportant, helps people see.”

"Ambient luminescence" is the background lighting that serves to perceive the environment in general, in Kelly’s words again:

"Ambient luminescence is the uninterrupted light of a snowy morning in the open country. It is foglight at sea in a small boat, it is twilight haze on a wide river where shore and water and sky are indistinguishable. It is in any art gallery with strip-lighted walls, translucent ceiling, and white floor. (...) Ambient light produces shadowless illumination. It minimizes form and bulk.”

Finally Kelly describes “Play of brilliants” as light as information, which can be dynamic or colourful:

"Play of brilliants is Times Square at night. It is the eighteenth century ballroom of crystal chandeliers and many candle flames. It is sunlight on a fountain or a rippling brook. It is a cache of diamonds in an opened cave. It is the rose window of Chartres... Play of brilliants excites the optic nerves, and in turn stimulates the body and spirit, quickens the appetite, awakens curiosity, sharpens the wit...."

Kelly saw visual beauty in the interplay of all three kinds of light, although one was usually dominant for him.

For the Seagram Building, Kelly came up with the concept of a "Tower of light”, a landmark for architectural lighting. The magazine Architectural Forum honoured it as "one of the best-illuminated buildings ever constructed." The lobby is dominated by vertical lighting. A custom-made wall-washing system highlights the unpolished light travertine surface. Additionally, rows of downlights create a welcome mat of light around the building, giving the building the appearance of floating. In contrast, the upper office floors are illuminated with a luminous ceiling in the perimeter of the building. For the "Four Seasons Restaurant" within the Seagram Building, Kelly employed his "Play of brilliants" strategy: Light reflecting metal curtains, a golden shimmering sculpture and underwater lighting for the pool generate a highly sophisticated scene for luxury dining. Due to the recessed fixtures, Kelly was able to concentrate on the effects of the lighting and not the luminaires.

For Dietrich Neumann, Professor of the History of Modern Architecture and Urbanism at Brown University and editor of the book The structure of light, Richard Kelly’s work displays an astonishing breadth of applications, a large vocabulary, and an impressive range of scale. He also points out that Kelly carefully stayed away from the use of colour, a stark contrast of light and shadow, and theatrical effects in general.

Today Kelly's perspective is still a valuable source of inspiration; his attitude forms a thrilling counterpoint to various contemporary lightings that contrast icons for attention and individuality. To quote Robert Stern: “Richard Kelly was a theorist of lighting and an immensely gifted lighting designer, creating images of such iconic power that they have become central to our understanding of modern architecture.”