All
Projects
Products
Events
Competitions
Save
An Alternative Museum for Burning Man and a Concrete Lighthouse: 12 Unbuilt Projects Submitted by our Readers
Share
Or
Copy

Read on to discover 12 unbuilt projects and their descriptions from the architects.

The Cubes Aleorion is a proposal for a lighthouse for the port of Volos. Cube-shaped concrete blocks placed upon each other, are horizontally shifted around the main vertical axis and are cut out in various ways, creating internal voids that house the stairway to the top. It is a modern interpretation of the so-called Aleorion of Xerxes, originally built around 480 BC in the middle of the sea passage between Skiathos island and mount Pelion in central Greece.

The Museum of No Spectators - Burning Man 2020

Out near the dusty perimeter of Black Rock City will soon lie a different kind of museum. An alternative museum that moves away from art being something other people, Great Masters, do and we worship, The Museum of No Spectators picks up on the wholly participatory nature of Burning Man culture. This is in sharp contrast to the default museum experience of, for example, the visitor who “consumes” art through the blockbuster show. At The Museum of No Spectators, the visitor is no longer a consumer but enters into what is a radically inclusive space where the creative process is a key element in how the art is being shared with others - as an inherently de-commodifying experience.

The project consists of designing three villas on a 12,000-square-meter land in the Oshan Mountains. The project is studied in two-phase, geology and typology, which is resulted in a duality of built and unbuilt. Thus, the insecure southern area (white layer) was assigned to the access with the least amount of loading, and the northern secure area (black layer) was devoted to constructing with the minimum possible excavation to meet the site’s topography. The main project’s program occurs in three layers of landscape, visible clusters, and invisible platforms.

The Museum of World Writing has a central location in ‘The Central Park’ of the city, providing a place for people to relax and enjoy open green nature of the town and sceneries. By the given context on the site, the architects intended to use the landscape as to be a major part of the design element and wanted the museum building to be a simple form to reflect the surroundings together with characteristics of writings and their various systems.

Assia 1505 is a multi-purpose complex for a couple's retirement plan located on a 5000 sqm land. Atelier 333 was inspired by the site landscape: rocks and yellow plants. The house was conceived as five volumes inspired by the textures of the rocks laying on the natural landscape following the existing topography. The concrete volumes are connected with passages cladded by a yellow skin that rotates to transform the space into an outdoor terrace: defining a continuous landscape through the house.

Throughout the design of the scenic tower, which is based on the concept of "nova", the manifestation of modeling and technology was not a means to an end, but rather a method – the architect’s hope to convey a spirit of actively pursuing the future. At the same time, the symbiotic relationship between man and nature is also explored in the design of Nova Tower. Located in Guizhou Province, the project is an important gateway with regards to the urban planning and development of “Longxi New Town”.

GAD in their design has taken the geology of the area, chimneys and cave dwellings as a point of departure for the architecture of this hotel and leisure project, CAPA. In fact, the design focuses on conceptualizing the context as a hybrid of landscape and building with functional and habitational strategies geared to the engagement with nature.  The strategy is derived from the archeological heritage and investigations there using it as a point of departure and engagement with the ancient and the archaic spatial knowledge located in the area.

JANREVAJ architects created a concept for a private investor of an Art Center inspired by the highest mountain in Slovakia – Gerlach Peak. Jan Revaj designed this Art Center as a free form. The Art Center as a space for cultural and social life development is designed to be in the most frequented part of Bratislava, which is surrounded by a shopping center and the longest river of Europe – Danube. The Art Center will have 7 floors in which there will be a gallery, forum, outdoor amphitheater, and restaurant.

With a design philosophy derived from the topography, history and urban texture of the city, Chinimachin Museum forms a new cultural focus and public space for the city of Bayburt and its visitors. The museum aims to establish a dialogue between the urban center and the historic fortress of Bayburt whilst exposing the city’s historic values. The museum design aims to unify architectural elements with constructional and functional features, resulting in a family of elements that function as volumes, panoramic windows, seating elements, and exhibition displays.

The redevelopment of this city block in Marylebone provides 79 private and affordable apartments, together with retail, restaurants and community facilities at street level, and public car parking in the basement. Greatly improved public realm provides active shop frontages, wider streets, and provision for the weekly Marylebone Farmers’ Market. It is a building without internal corridors and all the apartments are accessed via a beautiful central courtyard. The apartments themselves are meticulously planned, each one enjoying a large verandah and generously proportioned rooms.

Located in Kyiv, Ukraine, the project puts in place offices, housing, and retail. Spread over 1,2 ha, the development designed by Architectural Prescription, in collaboration with AB Zotov&Co and Terra Project. Based in Amsterdam, Architectural Prescription engages in design on both an urban and architectural scale. The practice employs a pragmatic, analytical design approach using advanced computational methods to develop projects and processes in which form is function.

Global Office Park, the first mixed-use project in Poland's Katowice is set to become a new icon of the city. With construction in progress, the complex will consist of two office towers and one residential tower set on a common five-story podium, creating over 86,000 sq.meters of offices and apartments. Located in the center of Katowice, at the intersection of Mickiewicza and Dąbrówki Street, Global Office Park is the first mixed-use project in the capital of polish Silesia implemented with such a large scale. 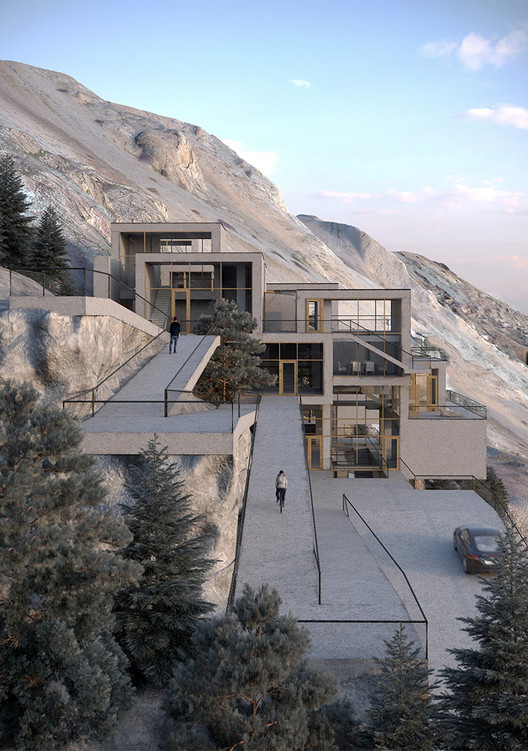