Save
Curtains as Room Dividers: Towards a Fluid and Adaptable Architecture
Share
Or
Copy

Over the past few decades, interior spaces have become increasingly open and versatile. From the thick walls and multiple subdivisions of Palladian villas, for example, to today's free-standing and multi-functional plans, architecture attempts to combat obsolescence by providing consistently efficient environments for everyday life, considering both present and future use. And while Palladio's old villas can still accommodate a wide variety of functions and lifestyles, re-adapting their use without changing an inch of their original design, today, flexibility seems to be the recipe for extending the useful life of buildings as far as possible.

How, then, can we design spaces neutral and flexible enough to adapt to the evolving human being, while still accomplishing the needs that each person requires today? An ancient element could help redefine the way we conceive and inhabit space: curtains.

With concrete evidence detected from antiquity of their existence, curtains have accompanied the human being for centuries in the creation of interior spaces. Mosaics from classical antiquity, illuminated manuscripts from the Middle Ages, and even Dutch paintings from 1600, depicted rooms that included curtains used in multiple ways [1]. During the Middle Ages, and in following periods, roller curtains were used to increase the privacy of the beds, while in Asia and Europe, the curtain - known as Portières - decorating doors with heavy pieces of velvet or plush. In the Victorian era, curtains combined borders, bows, laces, and other accessories with the most diverse patterns, designs, and types of fabrics.

In 1927, curtains were masterfully incorporated into modern architecture in novel ways, exemplified by Mies van der Rohe and Lilly Reich's Cafe Samt & Seide, designed for the "Die Mode der Dame" exhibition in Berlin. Here, the 300-square-meter space was zoned with silk and velvet curtains, strategically placed and distributed according to their colors and heights. Decades later, in 1995, Japanese architect Shigeru Ban reinvented traditional Japanese screens and blinds by designing an iconic house clad in huge double-height curtains, varying the connections between public and private as needed by its users.

Today, materials and styles have changed. Synthetic fabrics and new installation and operating systems provide new application possibilities, which accompany different levels of opacity, light absorption, thermal and acoustic insulation, UV protection, and even automatization. And although the curtain's main function is still associated with windows, its ability to ensure high fluidity and flexibility has made them an effective option for dividing and zoning spaces.

Next, review a series of projects that follow this latter logic, incorporating curtains not only as light and adjustable 'walls' but as a central point in the aesthetics of the environment.

"The three workspaces can be partially isolated with the use of curtains that, when closed, create diffuse volumes with organic shapes."

"Upon entering one is immersed within a carefully balanced constellation of lantern enclosures. Each suspended cylindrical enclosure features a category within the brand’s oeuvre, and provides a contemplative space that harmonizes and celebrates its contents. Hung from a circular wooden ring, the textile drapery provides a backdrop to foreground the hanging garments within, while also shielding the visitor from any visual clutter."

"The introduction of the curtains allows the functional organization, defining different environments, within an area of only 60 sqm. In addition to the curtain themed option, this element allows to feel the whole space or divide it into the predefined programmatic spaces: work area, meeting room, lounge, and kitchenette."

"The curtains provides visual privacy while allowing light to transmit across the spaces. As experienced, the spaces changes and adjusts to the life of the family while the railings remain always there as a backbone to support it."

"The curtain as a continuous element, minimizing the inside-outside that separates closets, pantry, and bathrooms, introduces theatrical and playful connotations and invites the inhabitant to perform with it, to change the space and to play with the mysteries, contradictions, and paradoxes that privacy offers us beyond morality."

"Curtains of different colours conceal the existing furniture and divide the space into different work areas, giving the area a domestic character and, at the same time, creating general acoustic comfort."

"The layered mesh curtains provide both publicity and privacy: People can sense a clerk working in the store if they wish to and the clerk can enjoy the limited openness as well as the privacy. The curtails also allow for flexible layouts within the store, each being installed in curtain rails at regular intervals."

"The layered mesh curtains provide both publicity and privacy: People can sense a clerk working in the store if they wish to and the clerk can enjoy the limited openness as well as privacy. The curtails also allow for flexible layouts within the store, each being installed in curtain rails at regular intervals."

"The three naves can be conveniently compartmentalized with railings, curtains or dry partition systems. Light divisions, more ephemeral than the concrete and metal of the structure. At some points, the three naves merge into two, or one. They extend to the outside, they become a terrace."

"The line expresses the beginning of everything: it is a simple element, but mutable, dancing and flexible. Imaginary or material. From the line, the movement is made, the creation that rises from it becomes a product; the lines of the life, the thought, the existence. Together, represented by the curtains, the line sets in more complex plots, developing into the plan, becoming expression."

"The circular cutouts are demarcated by white textile curtains for the full height of the space, they can be closed or left open. [...] The whole space works on the principle of a gallery which can be easily adjusted according to the actual needs."

"Because the design doesn't provide any space to hide the interior objects, this transparency puts the objects in a kind of open exposition. The content of this visual landscape then becomes an externalization of the owner and his memories". 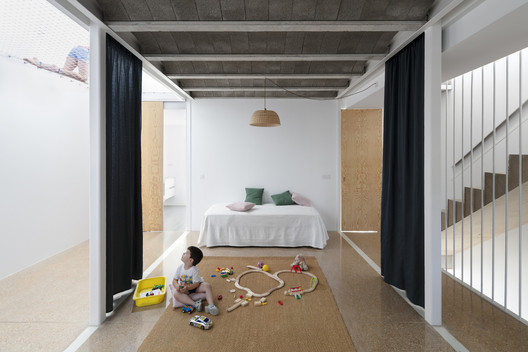