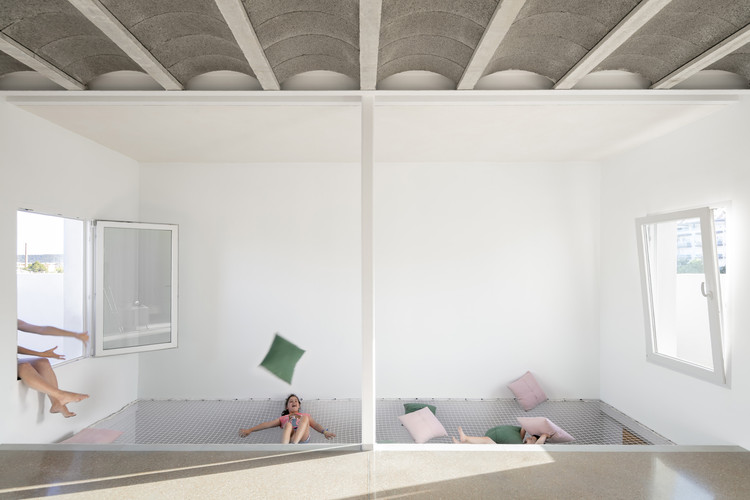 Text description provided by the architects. A house to be enjoyed with the family. A house that changes, that adapts, that welcomes parents, great-grandmothers, daughters, sons-in-law, grandchildren, either some of them or all at once. A house that rises in the morning with the soft murmur of a quiet breakfast and, in the afternoon, tucks you in with the uproar of the children playing, with table talk stretching, with that last-minute meeting. A flexible, vibrant house evolving through time and transforming with the needs of the family. In How Buildings Learn, Stewart Brand tells us about the layers of time. He identifies the structure as the most perennial layer, the hardest one to change during the lifespan of a building, regardless of the site conditions.

Subjecting the structure to a specific functional layout would, sooner or later, involve desynchronizing it from the life it contains. Thus, REI house, located in Requena, is organized following a flexible system that contains different uses -from Christian temple to market, courthouse and administrative use in Roman times- which has proved an effective and elastic solution through history: the basilica plan. The layout consists of three naves. The central nave holds the main functions: eating, chatting, resting, playing, etc.

The slender tubular metal columns separate the central area from the ambulatory, from which to access the equipped perimeter. The side aisles are shaped as sacristies, domestic “secretaria” of the 21st century. This spatial configuration transcends the use as “common” housing. It allows the inhabitants to transform and appropriate the place with unexpected uses. Based on Robert Smithson‘s idea in his essay Monuments of Passaic, this house stands as a ruin before being built. That is, it contains every new construction that will be built in the future.

The three naves can be conveniently compartmentalized with railings, curtains or dry partition systems. Light divisions, more ephemeral than the concrete and metal of the structure. At some points, the three naves merge into two, or one. They extend to the outside, they become a terrace. They even dig the floor and connect to the lower level. The net sifts the light illuminating the central spaces of the first floor.

The false ceiling appears where necessary, allowing the ceiling of the central areas to be bare and reveal the curved concrete vault, thus becoming synonymous with the main space. Basic materiality that seeks the consecration of profane materials in this sort of apocryphal basilica. In short, this project explores an architecture that allows changes, which tries not to confine life or freeze it in a good shot. Always under construction, accommodating, constantly changing. Interactive and stimulating. As Aldo Van Eyck would say: “Whatever space and time mean, place and occasion mean more”.