Save
A Psychiatric Hospital and an Alternative Public Workspace: 10 Unbuilt Projects Submitted by our Readers
Share
Or
Copy

Read on to discover 10 unbuilt projects and their descriptions from the architects.

The Winning Proposal of the City Main library Gwangju in South Kora consists of 2 phases. The First Phase consists of eight functional cascaded plateaus, 492m2 each. The initial, ‘zero plateau’ of the Hall is the segment of the access plane of the Library Square. All along the north façade of the Library Promenade the system of inclined pathways – ramps run through and at the opposite side, along the south façade, runs a technological, book transportation system. The Second Phase consists of four cascaded plateaus, possible to connect with the existing slabs of the incinerator building.

Hoijakka, or a Finnish sleigh carousel, the winning proposal for Hartaanselänranta design competition, complements the existing urban structure of Oulu, Finland, and offers a new, vivid and versatile living environment that is built on both banks of the Oulujoki river delta. The river delta gives the area a unique identity and acts as a starting point for the design of the new, sustainable and future-oriented neighborhood.

Winner of the 1st Prize, the proposed design is positioned on the periphery of the eastern part of the competition site where trees are more randomly located, allowing the hospital units to fill in the gaps to form dynamic compositions. Eliminating the boundary effect and creating a large atrium space, patients can, therefore, see the high-quality structures and the designed therapeutic gardens instead of the high walls that isolate them from society.

Located on Roosevelt Island, New York, the proposal for the City of Dreams Pavilion replaces the first stipulation of the famed mantra reduce with repose, which acts as a semiotic device and serves a conceptual function, being both instrumental and motivational. […] The ambition of this pavilion is to operationalize this sensed instability and derive an architectural language that also informs, directs, and challenges architectural notions of tectonics, structure, and construction.

Hatch Architects and Studio Etienne Bastormagi have collaborated on a proposal for the KIC “knowledge and Innovation Center” competition for the Tripoli Special Economic Zone. The project located next to the UNESCO world heritage nominated site designed by renowned architect Oscar Niemeyer presents an architectural opportunity to create an extension of the exhibition area. The design of an iconic, multifaceted, functional office neighborhood, and micro-scale parks, promotes the intersection between nature, working and public life.

The Mardin Mosque, located in the ancient Mesopotamia lands, translates the local character and historical urban texture of the region into a contemporary approach. Design approaches the notion of religion as an ancient concept and it materializes the prayer space out of it, like a carved and stacked form emerging from the local landscape. The concept evolves by centering the place of worship. Along with the supportive spaces and suggested uses in the program, the overall complex is considered as an urban focus.

Situated in China, the renovation of the library is both an extensive and simple process with the preservation of the existing building linear walls. A generator of the village’s social and cultural experiences, the design acts as a meeting point for agricultural eco-tourists and villagers. The park and the village library has been incorporated into the design as a whole gathering space. […] The library acts as a thoroughfare from one end of the road to another with the attempt of making it public-friendly and welcoming.

The key objective of Sinnae Compact City is to present a new role model that realizes new multi-family housing supply for young people and newlyweds, the introduction of job-housing proximity concept, city to restore interregional disconnection by railroad, implementation of living SOC program that coexists with the Jungnang-gu area, a win-win sustainable city as a boundary between urban development area and natural environment, cyclical self-sufficient city of education, culture, production, and consumption.

With a concept revolving around the notion of “Sustainability and ecology as a pioneer for a public building”, the proposed design idea contains some premises to re-examine peremptory and problematic modern humans working conditions. It is imagined as a hybrid living center where working, nature, resting, producing, consuming mix together. In this way, the human factor is thought of as a source and it is aimed to use that source accurately.

Located in St. Kilda, Melbourne, Australia, the winning proposal aims to unite recreational, cultural, economic and ecological functions within a coherent composition that reinstates Brookes Jetty as a significant civic space and injects the site with new urban vitality. The scheme explores the opportunity to design a structure inspired by the fluid geometries of the coast. The new jetty operates, both visually and functionally, as a smooth transition between land and sea, a coastal formation that mediates between solid and liquid. 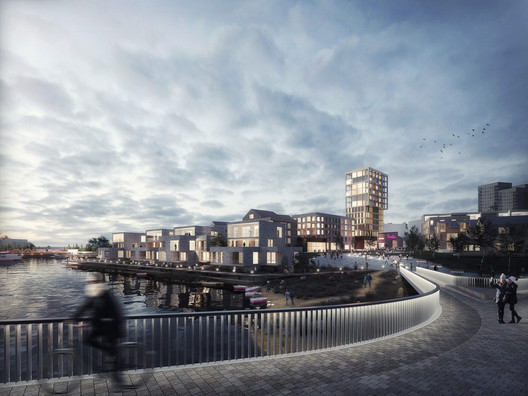