Save
Art and Architecture: 6 Installations Responding to the Climate Crisis
Share
Or
Copy

Studying the data that indicates a climate crisis that has been affecting the whole planet for the last decades, the reactionary attitudes may sound disappointing. However, at the same time that the news indicates a global average temperature rise, the political focus on the climate crisis is also intensified, according to the UN Environment report released in 2019, which is a reflection not only of the occurrence of manifestations and protests around the world but also of the so-called activist art expression.

This way, climate warnings have echoed in artistic installations that aim, through the visualization of the serious current stage and its future perspectives, to make people more sensitive towards this issue. Initiatives like ART 2030 (a non-profit organization that acts in order to promote, through art, the objects of sustainable development of UN) treat the climate crisis with artistic means and are very important to provide information regarding the climate conditions in the best way to reach a wide public.

FOR FOREST – The Unending Attraction of Nature / Klaus Littmann

In order to raise awareness of climate change and deforestation damage, Littmann installed in the Wörthersee stadium field, in Klagenfurt city, Austria, 300 trees of different species with the intention to replant them around the stadium after the installation period. The piece, inspired by a drawing done by the Austrian artist Max Peintner, acts as a warning since it inquires if one day we will have to admire the reminiscent nature in designated places like with animals in the zoo.

The sculptures were installed on the ground floor of the Baltyk Building, designed by MVRDV, in Poznań, Poland. Each pattern and shape is an embodiment of a statistics or environmental study, resulting in abstract forms which meaning can be explored by consulting a QR code printed on each sculpture. According to the architect Iwo Burkowicz, the intention of the installation is to present expressive pieces, but also objective and factual.

The installation, that was placed in the Sesc 24 de Maio façade, during the 12nd São Paulo Architecture Biennial, had as initial bases the "Warming Stripes" chart that represents, through colored lines, the climate changes in Brasil from 1901 to 2018. Data relative to the changes in the average temperature of São Paulo city were added to this initial study, obtaining a chart that had to be adapted to the building size and the available colors. According to the creators, "the further we move away from Earth, hotter are the conditions and our existence becomes more critical, as well as for the other planet creatures”.

Arranged in an open-air circle, twelve ice blocks taken from Greenland represents the twelve clock hands in the installation of artist Olafur Eliasson. The piece seeks to raise awareness of climate change through the direct contact between the public and the constantly melting ice, emphasizing the issue of time in this process. The project was held for the first time in Copenhagen in 2014 and, in the further years, it was installed in Paris and in London.

The sculpture of the artist Lorenzo Quinn during the Venice Art Biennale of 2017 represented two hands that, emerging from the Grand Canal, rested themselves in the Ca'Sagredo Hotel. The hands, that looked like sustained the building surrounded by water, represented an alert over the climate crisis and the susceptibility and fragility of the built environment when facing this issue. The symbolism of the sculpture was associated not only to the human capability of action to destroy the nature but also to their capacity of interfering in this scenario.

The installation, that was inaugurated in the UN headquarters in New York, as part of ART 2030 during the 74th session of General Assembly of the United Nations, also happened in the Central Park, inviting the public to take part in a collective piece that dealt with the air pollution. In two expirations, each participant should make two strokes from the top to the bottom (one stroke per expiration) in a white and curve panel. The project reflects the potential of collective and community actions, at the same time, it warns that the air we breathe is part of the world and the climate we share. 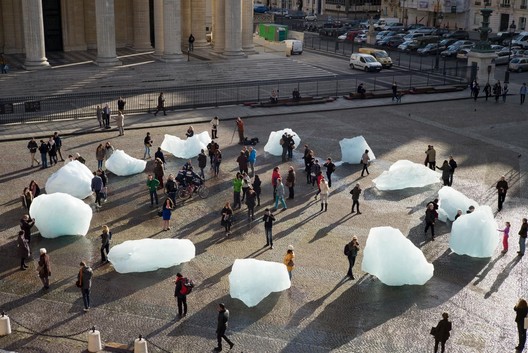