Throughout the last 12 months, the architectural community has responded in various ways to the Climate Emergency. From innovative proposals that tackle the sustainable design of healthy cities, to collective political action and lobbying, 2019 saw a continued mobilization of ideas, opinions, and actions on how architecture can be used as a tool to help the planet.

As we did in 2018, we have reviewed and collated 12 months of reporting on the Climate Crisis to offer an overview of how the architecture community is responding to the challenge. In a new year, and a new decade, these developments will undoubtedly be accelerated as intensity to tackle climate change grows. For example, here at ArchDaily, we are continuing our monthly topic series by dedicating January to the “Climate Crisis,” offering readers further ideas, insights, and paradigms for using their skills for action.

The Environmental Cost of Cement

In January, we elaborated on an investigation by the BBC into the damage caused by cement and concrete production. The article also puts forward ideas on how the construction industry can reform its dependence on the material.

How Urban Planning Can Help us Cope with Climate Change

Also in January, we published a piece that explored how factors such as urban grids, city planning, and street design can impact the environmental conditions in cities. The article also reflects on how changes in materials can combat climate change.

James Woodall, Sustainability Manager at Allies and Morrison, contributed a piece that reflects on four key points of action for architects and designers to tackle climate change in everyday practice.

In March, New York City announced plans for a $10 billion coastal resilience project to protect Lower Manhattan from flooding. The city’s mayor Bill de Blasio described the scheme as “one of the most complex environmental and engineering challenges [New York] has ever undertaken and will, literally, alter the shape of the island of Manhattan.”

One month later, the city also announced plans to ban the construction of new glass skyscrapers, due to the inefficiency they have demonstrated for heat retention. The plan is part of efforts to reduce the city’s greenhouse emissions by 30%

The Architects Declare Movement is Founded

In May, some of the world’s leading UK-based architects joined forces to call for industry-led action on the twin issues of climate change and biodiversity loss. The “Architects Declare” group includes firms such as Foster + Partners, David Chipperfield Architects, and Zaha Hadid Architects.

Indian firm Morphogenesis takes readers on a tour of their environmentally-conscious projects, pushing the boundaries of sustainable design by designing habitats that merge the vernacular and the global.

In June, Mario Carpo published a piece that reflected on how changing attitudes to travel in the 21st century has stemmed from an increasing awareness of the damage the airline sector can cause on the environment.

The Alarming Temperature Rise of 520 Cities

In July, we reported that the City of Utrecht Council, in collaboration with advertising agency Clear Channel, has transformed 316 bus stops across the city into “bee stops.” The adaption involved installing green roofs onto the bus stops, creating bee-friendly spaces for the endangered species.

In September, we argued that the creative skills possessed by architects, artists, and designers, can be channeled into progressive, collective action on climate change. In doing so, we spelled out the connection between architecture, protest, and activism.

10 Tips to Design Landscape Infrastructure: Not All Parks Should be Green

We concluded a year of climate coverage with ten tips by Mariam Garcia Garcia of LandLab on the challenges that landscape projects face — from the climate emergency to responsibilities to the ecosystem. 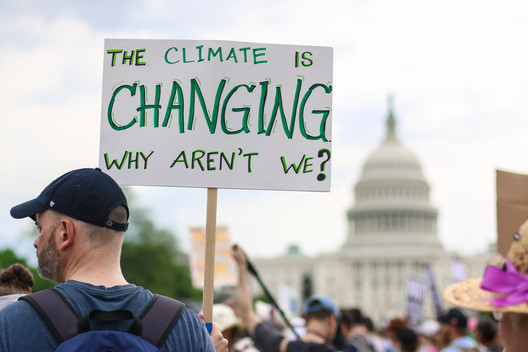