The motive behind analyzing the climate of 520 world's cities with populations of 1,000,000 or more was to visualize the climatic change for cities in the future and to inspire action that would help to change this outcome for people across the globe.

Some of the questions that the research sought to answer: What percentage of the world's principal cities will maintain their current climate conditions vs. which cities will take on the climates of other cities in other geographic regions? More importantly, what percentage of cities will experience new climatic changes beyond what they are able to currently handle and, if these cities do change their climatic conditions, will this change be uniform across the planet?

"Even in a best-case climate scenario, we found that 77% of cities in the future will probably experience a climate more similar to another city than to their current one. Furthermore, 22% of cities will experience climatic conditions unlike any ever experienced today."

"As a general trend, we see that all of the cities surveyed are taking on more subtropical characteristics, with cities in the northern hemisphere changing to warmer conditions, similar to regions 1000 km south of them, while cities in the tropics take on drier conditions."

What about Latin America's Major Cities?

Buenos Aires will have a climate similar to Sydney's; Santiago de Chile to Nicosia's, the capital of Cyprus; Quito will be like Durban in South Africa; Mexico City like Gaborone in Botswana, Africa, Sao Paulo like Miami, and Sucre like Mexico City. You can see these cities and more with this interactive map. 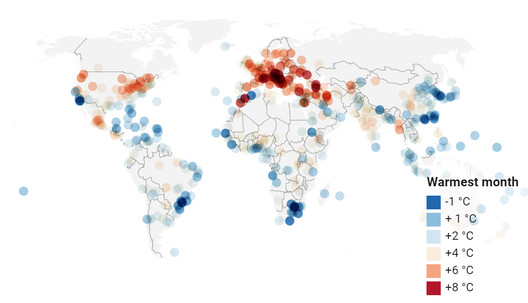