New York City Mayor Bill de Blasio has announced plans for a $10 billion coastal resilience project, designed to protect Lower Manhattan from flooding. In an editorial piece in New York Magazine, Mayor de Blasio outlined the ambitious plans to alter the waterfront of the Financial District, constructing a major infrastructural element up to 500 feet into the East River.

The study found that by 2050, 37% of properties in Lower Manhattan will be at risk from storm surge, rising to 50% in 2100, when 20% of streets will be exposed to daily flooding. Under the subsequent project, dozens of adaption measures will be carried out to build resilience in Lower Manhattan, fighting sea level rise, groundwater table rise, tidal inundation, storm surge, extreme rain, and heat waves.

Half a billion dollars will be dedicated to fortifying most of Lower Manhattan with grassy berms in parks and removable barriers that can be anchored in the face of oncoming storms. Along South Street Seaport and the Financial District, on the eastern edge of Lower Manhattan, the coastline will be pushed out as much as 500 feet, generating new public realm while raising the outboard edge to meet sea level rises and storm surge.

The project has been hastened by recent natural disasters to hit the city, such as Hurricane Sandy in 2012, where 17% of the city’s land was flooded, at the cost of 44 lives. Major reports carried out in 2018 concluded that a plan was needed to ensure that Lower Manhattan’s vitality and growth could confidently continue through to the 22nd century, culminating in the plan announced by the Mayor.

Beginning in the spring of 2019, the City will establish a community engagement process to discuss the study, and propose further planning. The plan is expected to be delivered by the Mayor’s Office of Recovery and Resiliency, and the New York City Economic Development Corporation.

The BIG U: BIG's New York City Vision for "Rebuild by Design"

Yesterday BIG, along with 9 other teams including OMA and WXY, unveiled their proposals for " Rebuild by Design," a competition which tasks teams with improving the resiliency of waterfront communities through locally-responsive, innovative design. Each proposal was required to be "flexible, easily phased, and able to integrate with existing projects in progress." 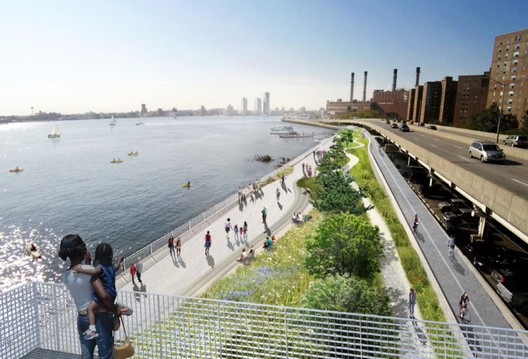