In a second attempt to gain permission for the structure, blocked previously by Stroud's local council in June 2019, Zaha Hadid Architects had to modify the design, and introduce new strategies that could potentially “make up for” the destruction of the original plot and its green fields.

The modified proposal also included a new landscape and a synthetic pitch in artificial grass. Transportation and infrastructure were also tackled differently in the latest application, in order to reduce noise and traffic.

Home for the Forest Green Rovers football club named the world's greenest football club by FIFA, the 5,000-seat timber stadium, will be entirely powered by renewable energy sources, once completed.

Back in 2016, Zaha Hadid Architects was announced as the winner of the international competition to design a new football stadium for the Forest Green Rovers in Stroud, UK. The winning scheme was selected for its all-wood and sustainable approach. Every element will be constructed of sustainably sourced timber, including the structure, roof cantilevers, and louvered cladding. 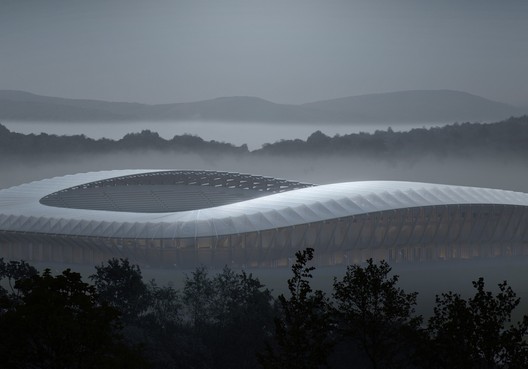