Habitat 67 was designed as the Canadian Pavilion for the World Exposition of 1967 as an experimental solution for high-quality housing in dense urban environments. Safdie explored the possibilities of prefabricated modular units to reduce housing costs and allow for a new housing typology that could integrate the qualities of a suburban home into an urban high-rise. The project was constructed from 354 identical and completely prefabricated modules, or boxes, stacked in various combinations and connected by steel cables.

Louis I. Kahn was assigned to found and build a biological research center in a picturesque site in La Jolla along the Pacific coast. Jonas Salk, the man who had discovered the vaccine for polio and assigned the project to Kahn, was adamant that the design for this new facility should explore the implications of the sciences for humanity. Three zones were to stand apart, all facing the ocean to the west: the Meeting House, the Village, and the laboratories.

Villa Savoye by Le Corbusier is one of the most significant contributions to modern architecture in the 20th century. Le Corbusier established “The Five Points” of architecture: Pilotis, Flat Roof Terrace, Open Plan, Ribbon Windows, and Free Façade, and presented them for the first time in this project. Villa Savoye transformed the architect's career as well as the principles of the "International Style"; becoming one of the most important architectures in the history.

Frank Lloyd Wright designed Fallingwater to redefine the relationship between man, architecture, and nature, after the plot owners requested a weekend house on the Bear Run Nature Reserve. Instead of building a house facing the retreat's waterfall as the clients requested, Wright integrated the design of the house with the waterfall itself, placing it right on top of it to make it a part of the clients' lives.

The Kimbell Art Museum is a modernist structure with it's revivalist details, lack of ornamentation, concrete, and use of natural light. Its distinct barrel vaults are rimmed with narrow plexi-glass skylights with hanging pierced-aluminum reflectors below, illuminating the concrete vaults and artworks displayed below.

The 38-story office building on Park Avenue was the architect's first attempt at tall building constructions. Mies' design set a standard for the modern skyscraper, which was a monumental continuity of bronze and dark glass, juxtaposing the large granite surface of the plaza below.

Originally named the German Pavilion, the pavilion was the face of Germany after WWI, reflecting the country’s modern culture that was still rooted in its classical history. Its sleek design was combined with rich natural material, pushing forward Mies’ career, as well as architectural modernism.

Spanish for 'The Red Wall', La Muralla Roja is a housing project that represents the architecture of the Arab Mediterranean Area. The walls are formed like a fortress, emerging from the rocky cliffs it sits on. The inner and outer facades are covered with bold colors to either contrast with nature or complement its purity.

The project was the first large scale project for Le Corbusier, after the need of housing was staggeringly high post the Second World War. The architect focused on communal living for all the inhabitants to shop, play, and live, in a “vertical garden city.”

The institution of Bauhaus was developed by Gropius as a means to establish a new form of design by intersecting architecture, art, typography, industrial, graphic, and interior design. Due to ongoing political resentment, the school was forced to move from Weimar to Dessau, a change that influenced minor alterations in the original style of the facilities. Gropius laid out his notion of the building as a 'total work' of "compositional architecture", incorporating the works of students in the school's architecture.

In mid 20th century, the Punjabi government in India elected to build a new capital city that projects an image of modernity and progress. Initially, the government assigned the project to  American architect Albert Mayer and his collaborator Matthew Nowicki, but when Nowicki died unexpectedly in an accident in August 1950, Mayer withdrew from the project. Le Corbusier was then selected to be in charge of further developing and detailing the preliminary plan already laid out by the previous architects, but instead of filling in the gaps of the previous plan, he transformed it into a clear representation of his own architecture style.

The church is one of Ando's signature architectures, embracing his philosophical framework between nature, light, and architecture. The building, which was a renovation to an existing Christian compound in Ibaraki, is an architecture of duality (solid/void - light/dark), leaving the church's empty conceret walls without any ornamentation, yet adorned by light and shadows.

Though never built, Archigram's projects and ideas combined architecture, technology and culture; when Plug-In City was proposed in 1964, it offered a fascinating new approach to urbanism, changing traditional perceptions of infrastructure’s role in the city and suggesting a hypothetical fantasy city with modular residential units that “plug in” to a central infrastructural mega machine.

When Georges Pompidou, President of France from 1969 to 1974, wanted to construct a cultural center in Paris that would attract visitors and be a monumental aspect of the city, architects Renzo Piano and Richard Rogers collaborated and developed one of the most famous and radical buildings of France. The architects, who were both unknown at the time, won the competition held by the president with an entry highlighted constructivism. The building was a high-tech modern cultural center structured with a system gerberettes and trusses, a design that was not yet seen in the architectural world.

This multi-arts center first opened its doors in 1982, but more than thirty years later, it continues to house a variety of cultural facilities and hosts multiple art events. The design of the complex is a product of Correa’s mission to establish a modern architectural style firmly rooted in the vernacular traditions of India’s past and distinct from European Modernism.

In 1987, the Berlin government organized an anonymous competition for the expansion of the original Jewish Museum in Berlin that opened in 1933. In 1988, Daniel Libeskind was selected as the winner among several other internationally renowned architects, as his design was the only project that portrayed a radical design as a conceptually expressive tool that reflects the Jewish history before, during, and after the Holocaust.

The popular retreat is as a fine example of Siza's careful integration of nature and design. The Leça Swimming Pools were one of Alvaro Siza’s first solo projects and had similar respect for the natural rocky coastline near his home. To preserve a large portion of the existing rock formations, the architect planned his modern interventions into the landscape, allowing the pools to reach out into the ocean and blend easily with the natural pool formations along the coast of the Atlantic.

The glass pavilion sits within a secluded wooded outside of Chicago and takes full advantage of connecting with its natural surroundings. Mies' design projects establish a strong relationship between the building and nature. The single-story house consists of steel columns and glass, elevated above the landscape so the house looks as light as possible.

Over five decades later the 'Nordic Pavilion' has come to reflect and embody Nordic architectural traditions. However, the details of the pavilion are clear indication that the architect wanted to invert these traditions entirely. Rather than create a closed space to shut the elements out as typical Norwegian vernacular architecture, the architect completely removed two of the building’s four boundary walls and opened the roof to the skies, letting the structure be in possession of its surroundings.

The buildings once rivaled structures such as the Statue of Liberty and the Empire State Building, holding the title of Tallest Building in the World from 1972–1974. According to the architect, the facility was envisioned as a physical expression of world peace and as a place for communication, information, proximity, and face-to-face convenience for a variety of business and financial stakeholders. 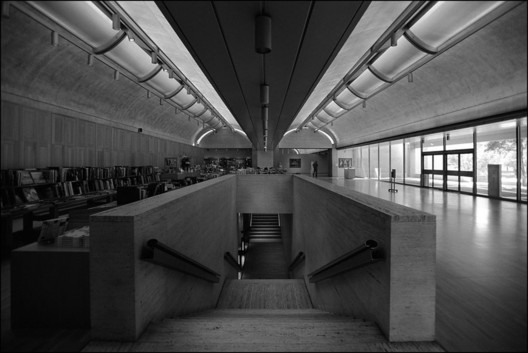