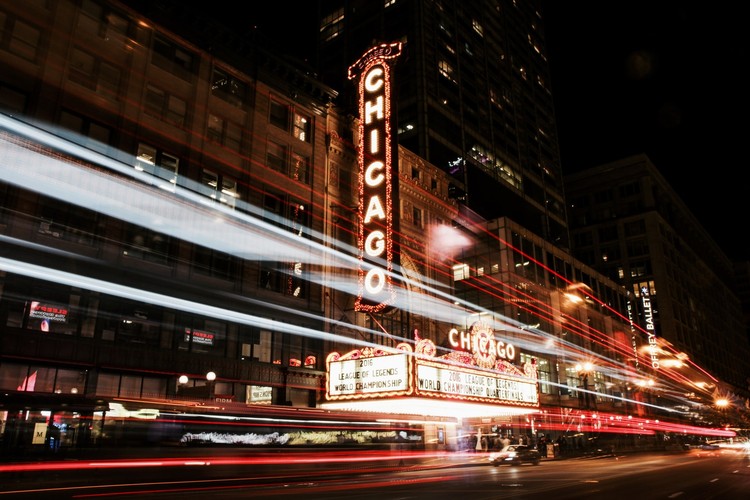 Description: Aqua Tower, completed in 2009, became the tallest building in the United States designed by a female architect. This figure will be soon surpassed by Vista Tower, also by Jeanne Gang (see point 6 of this list). Taking inspiration from striated limestone outcropping – a common feature in the Great Lakes region – the façade undulates in and out. Floor slabs across the height tower vary according to use, views and sunlight creating an undulating and sculptural elevation. Read more here.

Description: The new home for the Poetry Foundation was designed by John Ronan Architects and built in 2011, being 26,000 sq ft its project area. Yet so small it is one of the most effective buildings in terms of concept. Like a poem that invites multiple readings, the space encourages repeated visits, revealing itself slowly over time. That is why the building is organized in a series of layers. Read more here.

Description: At the time of its completion, John Hancock Center became the world’s second-tallest structure. This tower was so relevant for SOM because it meant the beginning of a skyscraper career. After then, they went on to design Sears Tower (1973, tallest in the world for over twenty years) and the Burj khalifa (2010, currently the world's tallest building). Don’t miss the signature lounge at John Hancock Center, which is very nice at sunset. Read more here.

Description: Frederick C. Robie House is a masterpiece of the Prairie style and a forerunner of modernism in architecture. Lloyd Wright broke down old barriers, creating a residential design with a horizontal roofline, large overhanging eaves, continuous ribbons of windows, and a wide-open living space at its center. Read more here.

5. The Art Institute of Chicago

Description: The Art Institute of Chicago, one of the oldest and largest museums in the United States, was founded in 1879. In 2012, the Modern Wing by Renzo Piano opened as the new home for the museum’s collection of 20th and 21st-century art. Don’t miss the Nichols Bridgeway across the museum, also by Renzo Piano. Read more here.

Description: This 101-story, 1,191 ft (363 m) skyscraper will soon become Chicago’s third-tallest structure – and the tallest structure in the world designed by a woman. Looking up from the river and park, the tower presents itself as three interconnected volumes of differing heights. The mixed-use tower will be the home of the Wanda Vista Hotel and 406 condominium residences. Read more here.

Description: Located at the intersection of the Chicago River and North Michigan Avenue, Apple Michigan Avenue cascades down from Pioneer Court to the river’s edge solving the constraints of a very difficult site. Completed in 2017, Chicago’s Apple store became another in the portfolio of Foster + Partners in addition to Istanbul (2014), London (2016) and Milan (2018) amongst others. Read more here.

Description: Mies van der Rohe’s design for these towers was initially not accepted because it was considered to be too extreme (yikes!). The materials are common: steel, aluminum and glass. Yet what made these buildings so special was the structural clarity and composition, which followed his principle “less is more” as it is demonstrated in his self-proclaimed “skin and bones” architecture. Read more here.

Description: Charnley-Persky House is one of the oldest houses of Chicago (with Glessner and Clarke Houses) and it is said to be the first modern house in Chicago. The red house next to it was built shortly before, and the differences are amazing. Tours are offered on Wednesday afternoons. Read more here.

Description: At the time of its completion in 1973, the Willis Tower was the tallest building on earth, holding this rank for over 25 years! You can go up to the top and be amazed by the 360º views of Chicago, Lake Michigan and the Illinois plain – on a clear day you might be able to see up to 50 miles and 4 states. Read more here.

Description: Lincoln Park Zoo’s South Pond was built in 1908 and it reflected the Victorian romantic and leisurely concept of nature in the city. Almost a century later, Studio Gang transformed this early 19th century urban pond into an ecological habitat buzzing with life. This wood pavilion works as an outdoor classroom and as a structure that frames the superb skyline views at this point. Read more here.

Description: Marina Tower, with its iconic corn cob towers, and identical floor plans, became the first circular apartment buildings in history. It was designed as a self-contained town, full of residential and commercial units – a revolutionary concept at the time. The successful building gave Goldberg the opportunity to continue building residential towers in Chicago where he expressed his architecture theories. Read more here.

13. Museum of Contemporary Art of Chicago

Description: The MCA was the first project in the United States by Josef Paul Kleihues, the German architect behind Berlin’s reconstruction after the fall of Berlin Wall. The Museum of Contemporary Art of Chicago opened its doors in 1996 with an exposition of Frida Kahlo, the first in the US! Don’t miss a remarkable aspect of the museum: the stairwell. Read more here.

Description: The McCormick Tribune Campus Center was Rem Koolhaas’ first building in the United States. The project seeks to reinvigorate the urbanism inherent – but long since neglected – in Mies van der Rohe's 1940 masterplan for the Illinois Institute of Technology. The large single-storey Campus Center provides a focal point for the previously sundered halves of the campus, and features a noise-absorbing steel tube wrapping the Elevated metro that runs directly over the building. Read more here.

Description: The Crown Hall is a straightforward expression of construction and materiality. The building was designed with an open aiming to avoid the disruption of columns. With a ceiling height of 18 feet and a massive floor area of 120′ by 220′, the architecture school contains perfect studio spaces that allow creative interaction among users with barely no interruptions within the interior space. Read more here.

Description: The Ed Kaplan Family Institute for Innovation and Tech Entrepreneurship, completed in 2018, is the first new academic building at IIT in over forty years. It was designed by IIT architecture professor John Ronan, is the new home of the school's Institute of Design, which previously was in the Loop. Conceived as a hybrid of campus space and building, the design is organized around two open-air courtyards through which visitors enter the building, and which serve as collision nodes for chance meetings and information exchange across departments. Read more here.

Description: Building on the concept of the iconic Marina City, Bertrand Goldberg envisioned River City as a tall, dense riverfront “city-within-a-city.” After more than a decade of revisions and battles with city planners and investors, the project was built in a smaller snake-like form. Goldberg said this was an “unfolding” of the original tower plan. Behind rusticated stone arches evoking railroad viaducts is a massive mixed-use complex with commercial space and a 70-slip marina. Read more here.

18. The Joe and Rika Mansueto Library

Description: The Joe and Rika Mansueto Library is one of the many stunning buildings around University of Chicago. The library tries to solve a storage space problem: 3.5 million books needed an Automated Storage and Retrieval System. The structural grid-shell of 120 x 240 ft. and the insulated glazing represent a very minimal and intelligent system for mediating between the varying exterior conditions and the desired interior comfort. Read more here.

Description: Frank Lloyd Wright used his first home to experiment with design concepts that contain the seeds of his architectural philosophy. In his adjacent studio, Wright and his associates developed a new American architecture – the Prairie style. The successful design of his house and studio led to neighbours commissioning a big number of houses around Oak Park, including the birthplace of Ernest Hemingway. Find all these projects on the map. Read more here.

Description: Before the Robie House, Fallingwater, and the Guggenheim Museum, Frank Lloyd Wright’s career was just beginning to take off in Oak Park and more precisely with a specific project: Unity Temple. The church is poised as an important work for the Modernist movement in the early 20th Century, but it was also the foundation from which the Prairie School would originate into Wright’s architectural language. Read more here.

Description: Plans to construct a Bahá’í temple in the Chicago area emerged in 1903, but it would be another 50 years before the temple was finished.The building’s architect, Louis Bourgeois, was a French Canadian who joined the Bahá’í faith more than a decade before working on the temple. He began his work on the structure in 1920 and moved his studio to a building across the street from the site, to be closer to his project. It was completed in 1953 as one of only seven Baha'i temples in the world. It has nine sides and is surrounded by exquisite gardens and fountains. The diameter of the dome is 90 ft. Read more here.

Description: With a length of 935 ft (285 m), the winding footbridge creates a wheelchair-friendly crossing over Columbus Drive, connecting Millennium Park with the lakefront Maggie Daley Park. It was built in 2004 and it has several biomorphic allusions and extensive sculptural use of stainless steel plates expressing abstraction. Read more here.

Description: Jay Pritzker Pavilion is a highly sculptural design element intended to act as a focal point for the Millennium Park. This open-air venue features performances by the Grant Park Symphony Orchestra, as well as jazz, blues, and other world music performances. Clad in stainless steel panels, the pavillion frames the stage opening and connects to an overhead trellis of curved steel pipes. Read more here.

Description: The Farnsworth House, though located in Plano (Illinois), was one of the architecture masterpieces that I was most excited to visit while in Illinois, so I’ve decided to include it at the end of this list. The steel and glass house was commissioned by Edith Farnsworth, M.D., a prominent Chicago nephrologist, as a place where she could engage in her hobbies—playing the violin, translating poetry, and enjoying nature. Mies created a 1,500-square-foot (140 m2) structure that is widely recognized as an iconic masterpiece of International Style of architecture. Read more here.

This list could keep going forever, so if you want more amazing architecture check these and other amazing buildings of Chicago on the map below or download the Free Architecture Guide of Chicago.

Editor's Note: This article was originally published on October 01, 2019. 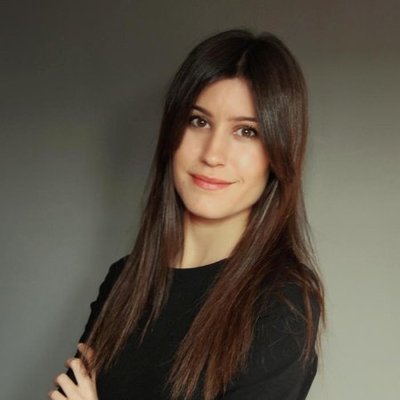 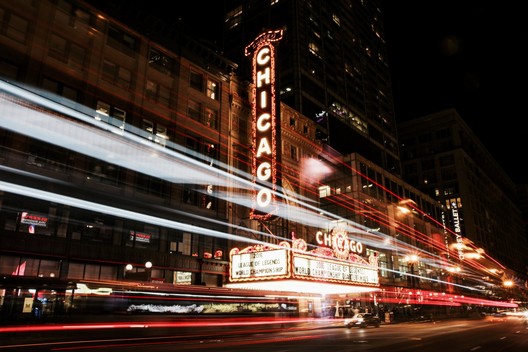