MVRDV have released images of their ambitious design for the Taipei Twin Towers, set to revitalize the central station area of the Taiwanese capital. The two towers are characterized by a “pile of blocks” that create a vertical urban neighborhood, complete with interactive media facades.

The site is currently occupied by the city’s main station, containing railway, airport lines, metro networks, and underused parks and plazas. Under the MVRDV scheme, the two towers will be built over the top of the station, offering retail, offices, two cinemas, two hotels, and the unification and redevelopment of surrounding plazas. 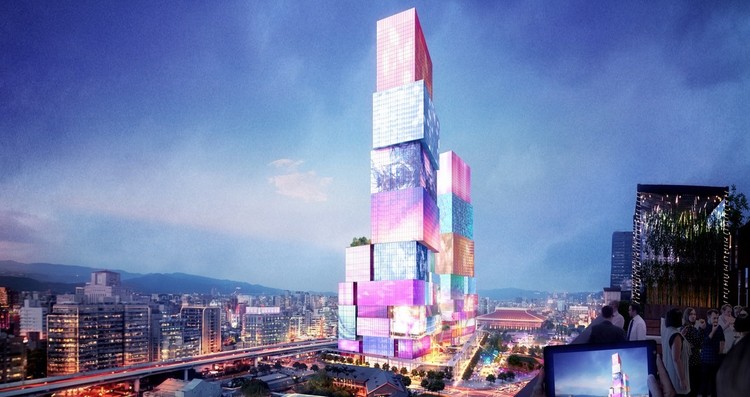 Arriving at Taipei Central Station is currently an anti-climax. The immediate area does not reveal the metropolitan charms and exciting quality that the Taiwanese metropolis has to offer. The Taipei Twin Towers will turn this area into the downtown that Taipei deserves, with its vibrant mixture of activities matched only by the vibrant collection of façade treatments on the stacked neighborhood above.
-Winy Maas, Principal and Co-Founder, MVRDV

The scheme seeks to weave together a varied urban context of small, human-scale buildings and larger towers. When experienced from up-close, the scheme is defined by a connected stacked base of small blocks, containing housing and retail. Above, the larger blocks form two towers of 337 meters and 280 meters, defining the skyline when viewed from afar. The larger blocks will house offices, cinemas, and hotels, casting separate identities of dynamic youth and established luxury.

Retail blocks have been stacked to allow central public atriums and a natural ventilation system, while a series of external escalators and walkways create a vertical shopping experience. A central spine connecting the scheme to the railway station is also proposed, taking the form of either a straight elevated walkway through the site or another running close to the facades of new buildings. This expansion of the public realm upwards allows for the skyscrapers to intertwine with the surrounding context, addressing the traditional divide between ground-level public space and isolated towers.

At ground level, a sunken plaza is populated with an array of interventions marking where historic structures once stood on the site, such as an original station and old houses. The interventions, including pergolas, tribunes, and public services, create an “archaeological study” within the plaza, visually demonstrating the city’s past.

News of the scheme comes days after OMA released an update of their Taipei Performing Arts Center, as construction of the bold theater form draws towards completion. 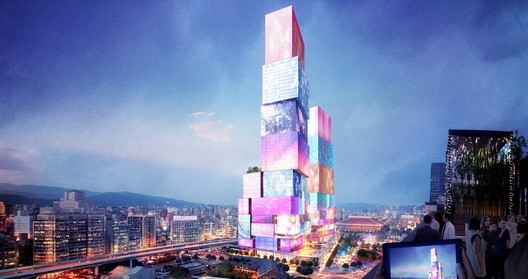