Save
Why Our Schools Need Better Architecture
Share
Or
Copy

Therefore, the space-architecture-user experience triad is thought alongside other areas, being that children have different needs, their processes of assimilation and transformation happen in tandem. Specifically within sociology, for instance, the process known as primary socialization – also called infancy – is responsible for the intellectual built up and social habits that form between 0 and 6 years old, acting to incur social, moral, and behavioral notions in their character formation.

Research shows that a baby is born with approximately 100 billion neurons, which are capable of making a quadrillion connections – five times more than an adult brain [1]. Of these, around 80 billion are lost because even as a fetus the baby begins to form these connections, known as synapses, and the unused cells die. In other words, infancy is the main neural development phase in the entire life cycle and can have a significant psychic and physical impact in adult life.

It is misguided to focus the brunt of educational investments during adulthood, and therefore we should begin pedagogical development soon after birth.

Supported by researches from all over the world, much investment in childhood education has been made in the past few years, both in the public and private sectors. When it comes to architecture, many projects have been designed alongside educational methodologies.

The private sector has aimed to develop enterprises with a social impact that seeks to educate children with intellectual skills and tools.

In the public sector, a number of architects from all over the world have been contracted to develop school projects focusing on the spatial design of educational areas.

Usually, when we imagine a school or a classroom, we immediately think of the traditional model, with rows of desks, a blackboard, and the teacher at the front of the class giving lectures. However, have you asked yourself why do most schools all over the world have this configuration? The “current” model is not new at all; it is at least 300 years old. Why do we keep designing spaces as we did in the 19th century?

Time has passed, but the model has remained the same. And, it may not be the best option. Teaching methodologies have changed, but only a fraction of projects have followed.

With the emergence of alternative teaching methods such as the inverted classroom, holistic education, constructivism, Waldorf, etc, the discourse has broadened.

The common ground is a design which considers not only children's ergonomics, but places them as co-authors, by allowing for spatial reconfiguration, open layouts, and featuring designs to work the physical, intellectual, and psychological systems.

The projects are not only educational tools, but can also provide possible solutions in social development.

Another relevant topic is equal education for all, including children who live in underprivileged conditions. This movement has led to ingenious structures for education, such as floating schools that make use of vernacular techniques. The Makoko Floating School was designed by NLÉ Architects – unfortunately, the school collapsed due to a natural disaster.

As a child, famed architect Francis Kéré would walk 40 kilometers to attend school in the nearest village in Burkina Faso. The school had poor lighting and ventilation. After studying in a European university, Kéré decided to direct his knowledge to build the Gando Primary School, a school in his hometown.

As mentioned before, educational projects are being developed in line with particular methodologies, hoping to provide the best environment for the next generation.

In Brazil, The Wish School is a bilingual and holistic institution that views the “person as a whole.” They believe that the “physical, emotional, social, cultural, corporal, creative, intuitive and spiritual aspects are just as important as rational thinking.”

With this being said, the design process was collaborative and co-authored by students and teachers. The four architects sat down separately with a group of children, teachers, coordinators, and maintenance workers to discuss different subjects that related to space, which enabled them to understand the “practical and functional matters, but also sensorial expectations, some abstracts and others not; sometimes impractical, others feasible” [4].

As a result, they pointed out that “the plan is a territory made by expanding and contracting zones, where borders are subtle, allowing for transgressions, enabling imagination, and understanding children as active beings. The corridors, places which sole purpose is to come and go, don’t exist. All places are classroom expansions and can be used as such. Therefore, to get to one point from another, many paths can be taken, with different interactions, to choose where to meet and where not to” [5]. Also, the shelved walls can be moved and transformed into classrooms or circulations.

Another project is 'Els Colors' Kindergarten, in Barcelona, designed by RCR Arquitectes. The use of bright colors sharpens visual perception, meticulously designed for a child's point of view.

Below, we have selected educational projects published on Archdaily: 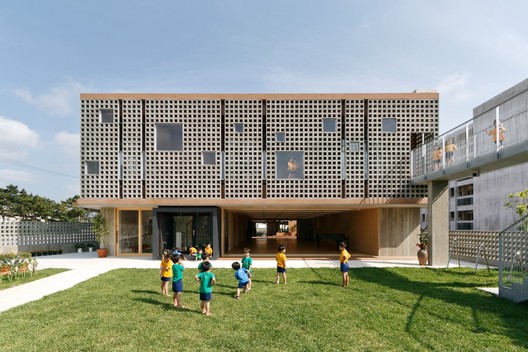