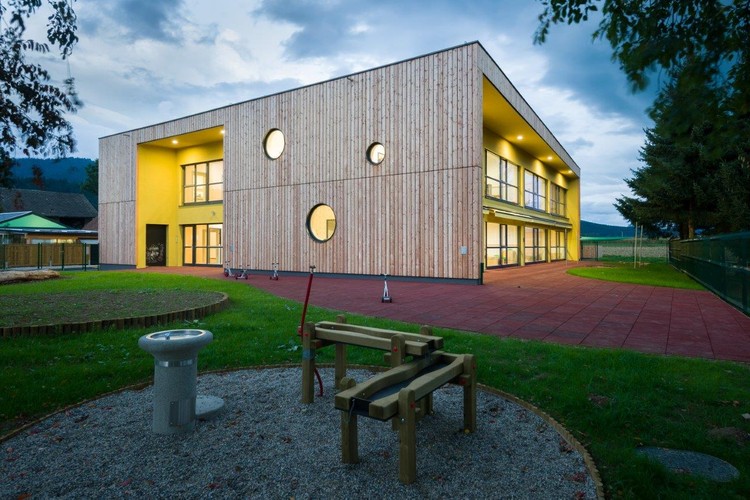 Text description provided by the architects. The Šmartno Timeshare Kindergarten was designed to encourage interaction, peer learning and self-learning. It has an open floor plan, which merges poorly used spaces such as wardrobes, corridors and stairs into one learning landscape together with playrooms; opening the playrooms’ wholly-glazed inner walls creates as much as 700 m2 of unlimited play area. Playrooms are connected with sliding doors so that spaces, children and activities can easily be united, which was envisaged as part of the kindergarten’s design and pedagogy agenda.

Children in the Šmartno kindergarten spend at least two to three hours daily on average with a free choice of activity and company. This allows them to mix with peers from other groups and get to know younger and older children, as well as teachers from other groups. The interior design follows this philosophy of everyone everywhere: instead of eight similar playrooms, each room has different play equipment and learning environments. Some playrooms are more into science, others are better furnished for music and art, or sports, or just play. There are more than 65 activity corners children can freely choose from. The timeshare approach gives children the chance to enjoy an adjusted schedule according to their interests, and provides comparatively more access to play and learning activities in comparison to traditional kindergartens. The number of social contacts is also greater, which benefits the development of the youngsters’ social skills, EQ and IQ. The staff was trained to make the best use of the kindergarten’s specific design, and they are excited with the results and working conditions.

The core of the building is a multi-purpose central area with multifunctional rainbow-coloured stairs. These help children learn colours and numbers, while the side walls – blackboards – serve as a large canvas for children's art. Under the stairs there is storage space and a special »badger’s den« with pillows where children can have their own calm retreat hidden from the rest of the more active areas. The cherry on top is the red slide, an endless attractor of play and physical exercise. Children love to slide down it instead of using the stairs, while to reach it they unknowingly overcome 22 stairs. The slide is a major passive element of exercise: children go down the slide 10–20 times each day on average. They slide alone and in groups of two or even three at a time.

Most furniture is on wheels, allowing fast and efficient changes and different spatial configurations. Thematic nooks, numerous blackboards, sports equipment of all kinds, and the accessibility of equipment encourage children to be active, discovering and pursuing their passions.

The building is designed and built as a low energy house, the full-wall timber construction from local wood ensuring the highest standard in sustainable construction. It is compact and has few openings on the north side, while the south façade is fully open. Extensive insulation, high quality isolated windows and low energy consumption (below 32kWh/m2) make the building energy efficient. Prefabricated elements made by Lesoteka Hiše were assembled and all the work, including the playground, was completed in only four months.

The playground is designed to use as much natural materials as possible, and the landscape is meant to cover all areas of physical activity and play. There are rubber surfaces, grass surfaces, play areas in circles, including sandboxes, a water game area, a climbing area, an area for drawing, etc. Next to the sandboxes there is a multi-functional hill with a tunnel, slide and climbing rope. Its back side will be used for sledging in winter, and as an amphitheatre for a football field during the rest of the year. Preserving the tradition of the first kindergartens, the Šmartno Timeshare Kindergarten also has a small herb and berry garden, where children help grow food they can later eat.

The kindergarten’s overall concept seems to work well: children like it so much that many refuse to go home in the afternoon.

The timeshare concept applies not only to the youngsters but also to the local community: the upper hall, which has a separate access for afternoon activities, is also used as a community centre for meetings, seminars, yoga, dance and Pilates lessons. 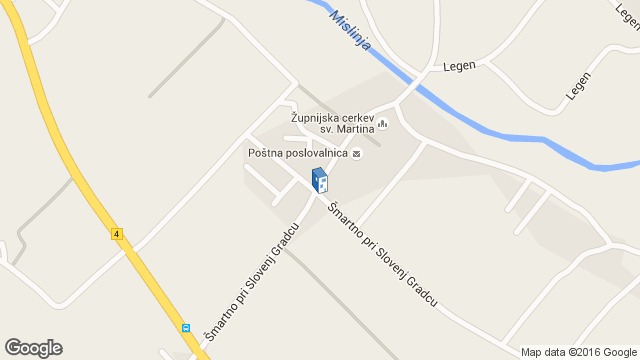 Location to be used only as a reference. It could indicate city/country but not exact address.
Share
Or
Copy
About this office
Arhitektura Jure Kotnik
Office
••• 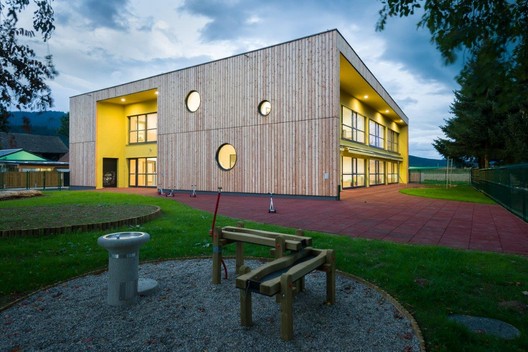