Save
How Will Future Generations Respond to Modern-Day Memorial Architecture?
Share
Or
Copy

The memorial is unique in that it is one of the few types of architecture whose fundamental function is not shelter but rather to feel and to remember. Humans have always needed something permanent and tangible to make sense of loss, to create a physical connection of stone and mortar between memory and the present. Memorial architecture offers a space where one can remember, mourn and try to make sense of intangible emotion. In many ways, the function of the memorial is to both soothe the pain of the present and to convince the world that the pain was not in vain, that it will live on somehow in collective memory and be passed on through generations and time.

However, the way in which memorials are experienced differs vastly depending on the time that has passed since the memorialized event. When memorials are first built, or the designs first released, there is often controversy as emotions associated with the event run high. Maya Lin’s Vietnam Veterans Memorial, a striking gash in the landscape that displays the names of fallen soldiers, was decried for its lack of patriotic symbols, what people saw as its political message, and the fact that Lin was Chinese-American designing a memorial for a war fought in Asia. Similarly, the controversy surrounding the memorial to the victims of Anders Breivik’s 2011 massacre led to the project being canceled by the Norwegian government. Entitled “Memory Wound,” it would have consisted of a split in the landscape near the island of Utøya, where the massacre occurred. The memorial was too close, both geographically and emotionally, and the locals rejected such a painful reminder forced into their daily lives. When a memorial is first constructed, it is for the victims and the survivors, a way to confirm their emotions regarding the event. Memorial architecture is often met with anger and resistance if it does not conform to the victims’ views, or because it can re-evoke the pain in a constant reminder.

As time passes, however, memorials begin to evolve and take on new social functions. What began as a physical object to fill the void in social reconstruction becomes a way to reconcile history with the present. Memorials begin to take on new meanings as the events fade from individual memory and the architecture becomes much more open to interpretation. Pre-WWII memorials are often freestanding monuments, with war scenes of elaborately sculpted heroism and names etched into stone. They are still places primarily for the victims and survivors, with other regular visitors being those whose past family members were involved as they seek a place to understand their own relevant history.

Post-WWII memorial architecture became increasingly anti-monumental and universal, prioritizing spaces that spoke of loss rather than celebrating victories. Using more abstract symbolism and elements of nature to evoke spiritual reflection, memorials became more about a landscape than a single object. The Hiroshima Peace Memorial Park, designed by Kenzo Tange, uses traditional forms of sculpture and monument dotted around a landscape. Although the design educates visitors about the horrors that have occurred there, from the view of the A-Bomb Dome to the contents of the museum, the overlying atmosphere of the park itself is one of peace and a new beginning. The universal symbols of water, nature, and open space appeal to all, the design encouraging its enjoyment as a normal park, not only as a space for somber reflection.

Peter Eisenman’s Memorial to the Murdered Jews of Europe similarly creates a landscape, but one of discomfort and unease. With 2,711 concrete slabs of differing heights, the landscape is reminiscent of large, unmarked gravestones—a sea of anonymity in death. Eisenman himself describes the project as a suggestion that “when a supposedly rational and ordered system grows too large and out of proportion to its intended purpose, it in fact loses touch with human reason.” The project confronts the idea of the memorial as a space for remembering a specific event, instead creating a landscape that begins to take on its own meaning and individual interpretations. “In this context,” Eisenman explains, “there is no nostalgia, no memory of the past, only the living memory of the individual experience. Here, we can only know the past through its manifestation in the present.”

The shift towards the abstract in memorial architecture changes these projects from spaces that memorialize a single event to spaces that begin to encapsulate an entire idea or emotion. It suggests a transformation in the way people will experience these memorials in the future when the immediate horror and emotional connection to these events inevitably fade from view. Although as a society we may wish for these events to be kept forever as a reminder to the future, things like the Yolocaust project, in which Shahak Shapira documented tourists being disrespectful at Eisenman’s Holocaust memorial, remind us that architecture cannot force people to reflect, or feel a certain emotion. Perhaps, one day, people will enjoy these memorial sites without a single thought of what occurred there, or perhaps the emotions of horror or peace will continue to affect visitors. As Peter Zumthor wrote in his book Thinking Architecture, “Architecture is exposed to life. If its body is sensitive enough, it can assume a quality that bears witness to the reality of past life.” Only time will tell.

This article was originally published on July 27, 2018. 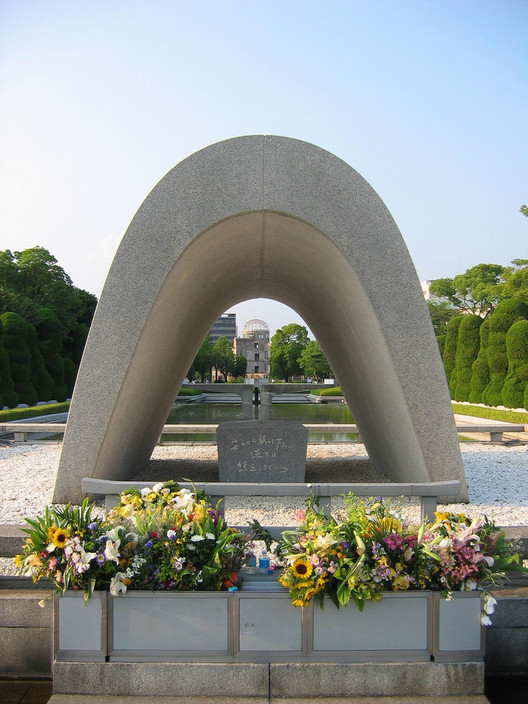