After receiving 98 entries from teams based in 23 different countries, the jury for University College Dublin’s Future Campus project has selected six proposals for their shortlist, putting each selected firm’s design on display to the public on the project’s website. The finalists include the American firms Steven Holl Architects, Studio Libeskind, Diller Scofidio + Renfro and John Ronan Architects, as well as the Dutch firm UNStudio and Irish architects O’Donnell + Tuomey.

The project will include two major changes to UCD’s Belfield campus, located about 5 km from Dublin’s city center: a major update to the campus’ entry precinct along Stillorgan Road, as well as a new 8,000 square meter Centre for Creative Design, which will house UCD’s design studios.

The new €48M Centre for Creative Design will be the centerpiece of the re-designed section of the campus, with many of the design proposals locating the new academic building prominently at the campus’ main entrance. UCD hopes that the new building will express the university’s creative abilities and help it create a stronger physical presence and identity within the city and the greater international academic community.

The largest university in Ireland, UCD currently has 33,000 enrolled students and significant alumni including legendary author James Joyce and several Irish presidents. The school moved from the city center to its current Belfield campus in the 1960s, occupying land that had previously been several expansive estates. Many of the historic houses from these estates have been integrated into the sprawling 133-hectare campus and maintained by the school as academic buildings. Two of these period houses, the Belfield House (built 1801) and Merville House (built 1750), are located within the precinct to be redeveloped and will be incorporated into the winning firm’s design.

Today, UCD occupies over a kilometer of frontage along Stillorgan Road, a major artery also known as the R138 that connects Dublin to County Wicklow and the southern areas of County Dublin. In its current form, this boundary is largely impermeable, with a raised berm and thick growth and tree canopies blocking access and views of the campus from the road. As part of the Future Campus initiative, UCD looks to break down this barrier and improve the connection between the university, its community and the city of Dublin as a whole. “We are seeking an integrated design proposal that improves the experience of our campus for its users, and that better connects us to our surroundings,” said UCD Architecture Professor Hugh Campbell, “orientating us outwards to the world and inviting our communities to engage with us.”

The six shortlisted entries in the competition are each detailed extensively on the project’s website, with images, diagrams, and a video explanation of each firm’s proposed scheme. These concepts show a wide variety of ideas, from Studio Libeskind’s proposal of a series of complexes that represent each of the Nine Muses in Joyce’s Ulysses to UNStudio’s plan to re-sculpt the campus as a “marketplace of innovation” that brings together the whole UCD community in collaboration.

The winner of the competition is expected to be announced this August, with the project projected to be fully completed in 2021. The following images show each shortlisted firm’s proposals for the project: 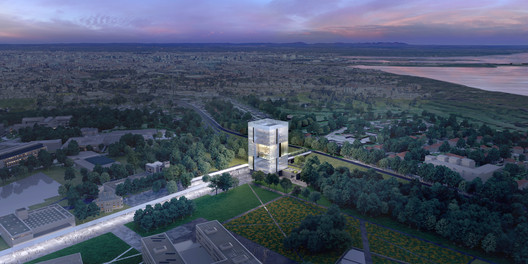