A decade ago, a wave of striking architecture invaded major Chinese cities as the country prepared for the 2008 Beijing Olympics and 2010 Shanghai World Expo. Internationally renowned architects proposed and developed over-the-top structures, which soon became new symbols of the country. These iconic buildings helped mark Beijing and Shanghai as the major entry points to China, but as time progressed, the phenomenon spread to other, lesser-known Chinese cities. As these "second tier" cities thrived, their governments wanted to improve living standards and develop their own trademark, resulting in new theaters, stadiums, schools, and office towers.

Having focused on Beijing and Shanghai in his first series of photographs, Kris Provoost has continued his "Beautified China" series with a deeper look at buildings in 12 Chinese cities throughout the country, from Harbin to Hong Kong. The project continues under the same premise: 20 minimalist photos taken over the past 8 years of striking architecture built in the last decade. 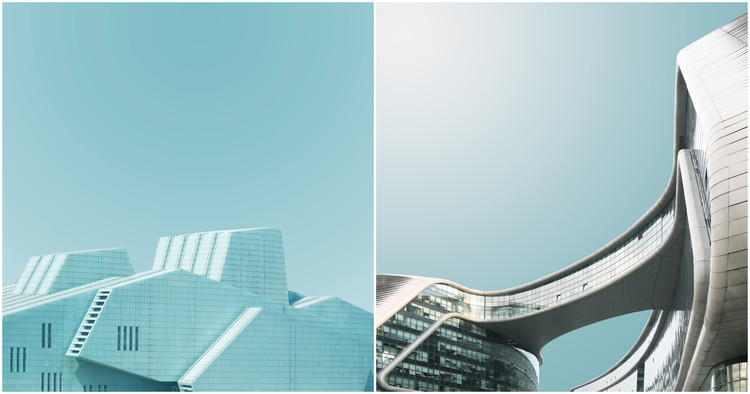 Throughout his years in China, Provoost had the opportunity to visit many new cities, some of which have only recently been put on the map due to their iconic architecture. Many of the buildings featured are controversial, since on one hand, they stand out, bringing more attention to the city; however on the other hand, because these buildings stand out, they don’t blend in with the surrounding architecture. As cities drift away from their heritage, some firms have managed to preserve and regenerate the old. Provoost asks: "can we end the era of flamboyant buildings and embrace the refined heritage again?"

Each design has particular factors that define its language and allow you to create memories with the building. Each building is taken out of context, all that’s left is its pure shape. This allows me, as an architect, to study and better understand the design that makes the building the way it is.
– Kris Provoost.

Read on to see the second part of the Beautified China series, with descriptions by Kris Provoost.

Standing proud on its pedestal, overlooking the dwindling river and the nearby bustling Chongqing city center, this theater is oddly shaped. Wrapped in green glass, this raw looking building, however, fits seemingly in gritty Chongqing. This project seems to sit in rest, before quickly being able to transform into a war machine.

Located in the far suburbs of Shanghai (Caoheijing) these 3 seemingly ordinary office buildings look rather generic. However when coming close and giving it that 1 minute of your short attention span, it reveals something significant. The towers are nicely proportioned and give a rather pleasant dynamic. The buildings are traditionally subdivided as a proper German office would do: combining 2 floors to make a short tower taller, you know the tricks. But what is significant is the duality between solid and transparent, and with varying widths. A simple tower with a certain dynamic.

Located in the Binhai district of Tianjin (1 hour drive east from the city center) this project is part of a new cultural district also housing that famous MVRDV library you may have seen somewhere. The Bernard Tschumi-designed Tianjin Exploratorium is a simple box with 3 tubes interlocked sticking out. Oversized and strong in contrast that is.

When there is a high-speed train station nearby, why wouldn’t you shape your buildings like trains right? 4 long shaped buildings are placed on site, slightly curved, and interconnected to create a futuristic feel when walking through the site. This mixed-use development on the outskirts of Shanghai gives you a glimpse of a nearby future where everything is shaped into the signature Zaha curves.

Rising 600 meters above the Guangzhou soil, the Canton Tower is located along the river overlooking the ever-growing city’s Central Business District. Bundling tubes with a simple twist, like making a simple rope, this TV and observation tower was completed in time for the 2010 Asian Games (hosted in Guangzhou). Its simplicity and purity give it a calm appearance, if that is somewhat possible if you over-tower all the adjacent buildings?

The master in generic buildings types with that certain twist. The sliced porosity block was one of the icons arising around the olympics time in 2008. Located in close proximity to Chengdu’s city center, this large-scale development clearly aims to cut the surroundings out. Again, from afar it looks rather ordinary, but from close it becomes extraordinary. Isn’t that sometimes the true beauty?

Built along the central access of the Guangzhou Business district, this Guangdong Museum has a famous neighbor. Overlooking late Zaha Hadid’s Opera House, the 2 form a nice ensemble in contrasting forms. 1 in strong rectangular shapes, the other in a more shaped, yet still angular, form. A rectangular box with subtracted Tetris-like shapes overlooks the river and the all-important city defining axis.

Half buried in the ground, the large-scale museum doesn’t appear so intrusive. Located in a large park in Shanghai’s Jingan District, the Natural History Museum is a nice addition for the citizens. A large green slope leads you from ground level to the top of the museum which should give a nice view over the park. This must have been the intention of the designers, however the slope is closed off and strictly forbidden to enter by the security guards. Bummer.

When approaching Hongkou SOHO from a distance it seems to be a fairly standard tower. Properly proportioned, simple vertical striped facade. A standard curtain wall, let’s say. However, when getting closer, details and certain intricate consideration become visible. With a bit a wind hitting the tower, you can see the building move, the simple vertical facade stripes are slim, geometrical elements that naturally move and give the tower a certain dynamic.

Squeezed in the hyper-density of Chongqing, this arts center immediately jumps out because of its color and its pointy gestures. A series of red and black tubes are interwoven (red > north-south, black > east-west) to create a 3-dimensional pattern. It is, however, unclear if the interwoven tubes are in reference to the typical Chinese woodwork techniques. The building certainly puts you on your toes as its seemingly always pointing towards you. Yes, you!

Recently completed in Shanghai, Caoheijing suburb, this project has strong contrasts within itself. A strong heavy concrete platform bridges over 2 bases and is topped off by a slick curtain wall facade. Strong opposing materials that sort of work together. Not your usual office typology but a strong corner piece building that will turn heads when approaching on the traffic-heavy adjacent highways.

The Gate to the East, Suzhou / RMJM
"Oversized Welcome"

Ancient Chinese cities had a wall and strategically located gates, much like ancient European cities. Nothing new here. When Suzhou expanded, they might have wanted that same gesture, but then scaled up 1000 times. RMJM’s Gate to the East stands along a large lake as the center point of the new business district. Welcoming the future with a link to the past? Good concept.

From afar, it looks like a minimalistic mountainous landscape, when coming closer it turns out to be a colossal 3 theater ensemble. 3 fluid shapes, each vertically sliced, combined by an even larger canopy. When walking through the site, it becomes clear what an enormous scale the designer had to deal with. Each time one of the vertical slices hits the ground, it feels like a mountain too high and too steep. From afar a familiar landscape, from close an unfamiliar and brutal realization that nature is more powerful than humanity.

The building that everybody has seen at least once! The national aquatics was one of the main venues for the Beijing Olympics of 2018. Located in the northern part of Beijing, opposite the main venue of the Olympic Park. The strong visual reference makes it unmistakenly clear that, yes, it is in fact a swimming pool. Nowadays it's a public pool, a waterpark as well as a testament to the successful Olympics, now 10 years ago.

Located in the Far East, newly established cultural district of Ningbo, the residential tower by Rogers and co is his first project in mainland China. It carries the unmistakenly bright colors we are familiar with in his work. Large apartments have their own dedicated outdoor terraces, although I’m not entirely sure that proves so useful? Cold winter, blistering hot summers and heavy pollution in between. But for sure it helps to give an otherwise ordinary residential tower that trademark industrial look.

Standing along the Huangpu riverfront, in close proximity to the Lujiazui supertalls, this new museum forms an important node in the newly developed riverfront. Atelier Deshaus again took out their signature style and regenerated this old industrial facility into a new cultural destination. Shifted slabs give you the opportunity to walk around its exterior and enjoy views over the extensive riverfront developments and be inspired by the activity around.

Set in a natural landscape, the building seemingly rises out of the neighboring wetlands. 2 dynamically shaped theaters are physically merged by way of a 3-dimensional walking path while also encapsulating an active urban plaza. Now, that I have been there, I’m not entirely sure the building rose out of the ground or rather descended from the sky. It feels alien yet familiar. If that is in itself possible.

Beihai is one of the popular beach destinations of China. Beihai is located on the far south edge of the mainland. Beach, sand, sea, and yes, waves. And the waves must have been the inspiration for MAD to create this wavy roof edge? The project is an extra-long wall of residential apartments overlooking the sea, and with that also blocking the view from behind to make sure only those residents can see the sea. Or is that why they punched the occasional whole inside the wall?

A while ago, there was a strong buzz about Hong Kong’s West Kowloon Cultural District masterplan. Many architects fought for the commission, which was later completely abandoned. However, buildings are going ahead and this Xiqu Theater is the first one that will be completed. From afar it looks like an ordinary closed off box, from close you notice that box is draped with a heavy aluminum curtain.

The standard business park typology gets an overhaul by Dutch designers MVRDV. Instead of freestanding small scale headquarters-type buildings, these 4 buildings are connected at the upper levels. Economically that also makes sense: the higher floors usually sell for higher prices, so the more space the more money for the developers. Basic economics. MVRDV gave it their signature simple touch. Shaped like a flower when looking up/down, these small-scale buildings have a signature now. 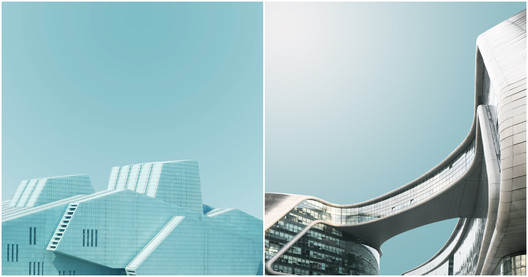