For students of architecture, few things are as thrilling as seeing one of their designs physically built. For a group of Polish and Norwegian-based students, this dream has become a reality.

Having won the 120 Hours student competition in 2017, the Warsaw University of Technology team behind the “In ‘n’ Out Village” winning proposal has combined with students at the Oslo School of Architecture and Design to realize the design, constructing 19 pavilions in a Chinese schoolyard. 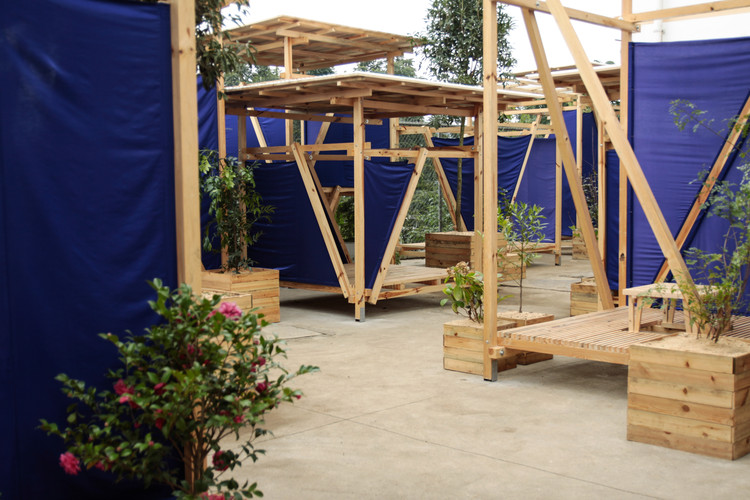 The 120 Hours competition in 2017 saw participation from over 3000 students, with the winning “In ‘n’ Out Village” design proposing several small, flexible outdoor reading and eating pavilions for an elementary school in a small village in the Guizhou province in China.

To finalize and construct the project, a new student-led masters course was created at the Oslo School of Architecture, with the sole purpose of developing and building the proposal on site. Throughout the process, students ensured the project was buildable with hand tools, by students with varying construction experience, and using local suppliers from the remote Chinese countryside.

The students were challenged to overcome linguistic and geographic differences throughout the project, commuting back and forth between Oslo and Warsaw to discuss ideas and construct prototypes, as well as navigating the Chinese bureaucratic system. Finally, in October 2017, the students traveled to China to finalize and construct the project.

The project now stands completed at the Lian Meng primary School in Pu'an City, Guizhou province, China, with a book about the project to be published in March 2018.

The full list of students involved in the project is as follows:

120 Hours Announces Winners of Its 2017 Competition, "The Way of the Buyi"

International student architecture competition 120 Hours has announced the winners of its 2017 competition, "The Way of the Buiy." For this year's edition of the challenge, which gives participants just 5 days from the announcement of the brief to its deadline to conceive a project, students were asked to design a 100-square-meter building housing a canteen and library for the LiangMeng school complex, located in the rural area of Puan City, China.