Next year, Richard Meier & Partners will add 37 condominiums to Bogotá with two 13-story towers surrounded by views of the city, mountains and Chico Park gardens. This will be Meier’s second project in South America after the 2016 completion of the Leblon Offices in Rio de Janeiro, Brazil.

Vitrvm’s unique oblique site is due to its borders - Bogotá’s main streets, Séptima Avenida, and the ravine in the north. Tower 1 reflects the angular site with its prismatic shape. Tower 2 responds to Tower 1 with two planes that translate into a more rectangular form. The towers derive from their programmatic functions as well as urban context. Residents will be able to enjoy amenities such as the two rooftop terraces, the lounge, media room, a children’s room, fitness center and indoor swimming pool.

For their first project in Mexico, Richard Meier & Partners collaborated with project developer Diametro Arquitectos. As the name suggests, the two towers are located on Paseo de la Reforma in Mexico City; a commercial main street with a memorial history. The 40-story mixed-use tower features a central void to allow for natural light and views from the high-end offices, retail, restaurants, fitness center, and parking inside. Next door, the hotel inhabits a smaller tower. Simple, and bold, the design generates a dynamic relationship between both buildings as well as the structure as a single mass and Mexico City’s existing urban fabric. Like Vitrvm, Torre Cuarzo is scheduled to open at the beginning of next year.

Germany expects the opening of Richard Meier & Partners’ Engel & Völkers Headquarters and Apartments in late 2018. Located in Hamburg, this project exercises transparency and natural light to create different atmospheres and privacy settings for its many programmatic functions. The exterior outer shell is continuous while also accentuating the various inner working of the building. Apartments, a training academy, offices and retail spaces surround the courtyard which acts as an urban living room. The architecture conforms to strict local sustainability guidelines enforced by the HafenCity district of Hamburg.

A private building, CDC Xin-Yi Residential Tower will dedicate its entire landscape to the public realm later in 2018. The landscape features a field with trees and sculptures created by international artists. Located on Xin-Yi Road, this Richard Meier & Partners design also plays with light and transparency. A solid north volume contrasts the more transparent southern volume. Service and core spaces exist in the solid mass while more naturally-lit public program inhabits the transparent structure. The vertical and horizontal geometric organization of the building responds to Taipei’s urban context. Residents of CDC will gain access to amenities such as an exterior swimming pool and roof deck. 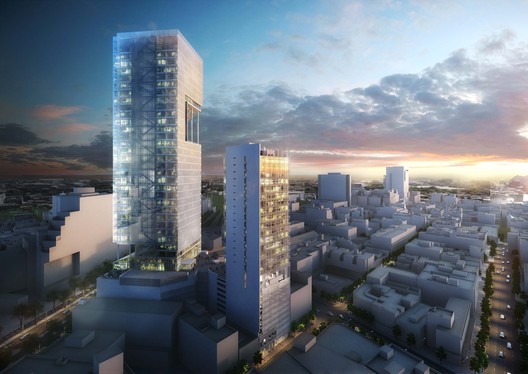