Not only was Le Corbusier one of the pioneers of modern architecture, but also of the round eyeglass movement. His famous owlish spectacles were custom-made at Bonnet, an elite Parisian eyeglass shop who also served designer Yves Saint Laurent. The simple, round shape reflects Corbusier’s functionalist ideals and the pure forms seen in his work both as a painter and architect. They quickly became his signature accessory, and beginning in the 1920s he, along with other notable figures such as Edith Head, began inspiring people everywhere to sport a similar, owlish look.

Experiencing any deja vu? It is no coincidence Johnson’s glasses are reminiscent of Le Corbusier’she got them specially made in 1934 by Cartier to resemble those of his idol. The classic round shape equally resembles the modernist ideals that Johnson held at the time, and the extra thick frames compliment his well-known humorous persona. And, while the style of Johnson's architecture changed dramatically over the years, the style of his favorite eyewear stayed essentially the same until his death over 70 years after he first chose it.

IM Pei is notable for his forms arising from different arrangements of simple shapes such as circles, squares, and triangles. As a young student and architect, Pei was uninterested in his Beaux Arts education, but rather found inspiration and appeal in the work of the modern masters. This fascination all began in the shelves of MIT’s library, where Pei encountered three books of—who else—Le Corbusier. Pei emulated his idols not only in his simple, modernist designs but also his eyeglass choice.

Unlike the thick frames preferred by his contemporaries, Meier opts for a wire-frame. In his architecture, Meier is distinguished from his modernist peers by the refinement and simplification he brought to traditional modernist principles, such as working almost exclusively in white materials. His architecture is characterized by pure geometry, open space, and an emphasis on light—all three of which can be seen in his wire-frame, circular glasses.

Libeskind’s iconic glasses are perhaps located on the opposite end of the eyeglass spectrum from Corbusier’s. Narrow and orthogonal with V-shaped arms, they reflect the striking angularity in his architecture, which was first seen in his Jewish Museum in Berlin and has become a recurring theme in most of his designs. Libeskind owns several pairs of the glasses in different colors, adding flair and style to his signature all-black look.

Ito’s choice of eyewear has varied throughout the decades yet has always been characterized by some variation of the rectangular frame. This classic eyewear shape has stood the test of time and, much like Ito’s architecture, is a timeless choice. His most current pair is white and slightly curved in shape, characteristics evocative of his Museo Internacional del Barroco and Taichung Metropolitan Opera House.

Not one, not two, not three, but four! Yes, Viñoly typically sports four pairs of his beloved Lunor frames at any given time. This may seem excessive, but they each serve a different purpose: one for distance, one for playing the piano, and the other two for reading and drafting. A handsome man with a full head of white hair, his signature set of glasses perfectly compliment his standard uniform: a black suit and black turtleneck. 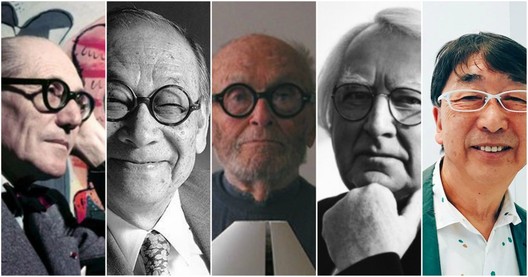