The Kharayeb Archaeological Museum (KAM) was designed by Shiogumo in the agricultural lands of the coastal village Kharayeb, in the south of Lebanon. The site-specific museum was commissioned to preserve and enhance the historical, cultural, and public significance by the directors of the archeological mission and site, Dr. Ida Oggiano (Istituto di Studi sul Mediterraneo Antico of CNR, Italy) and Dr. Wissam Khalil (Lebanese University). 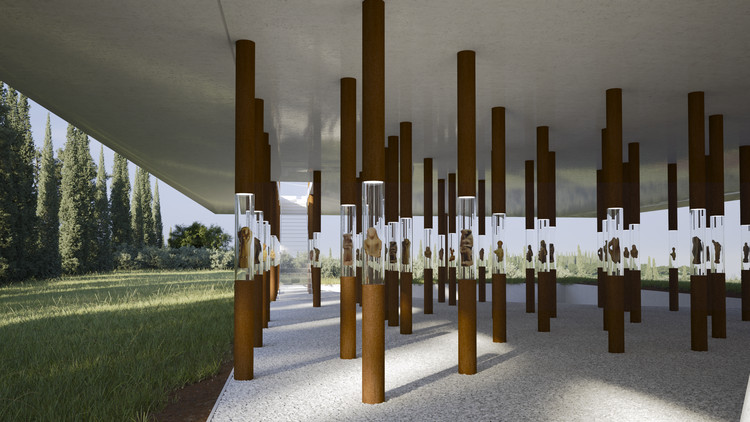 The original goal of the project was to enhance the villagers’ use of the space while preserving the natural and agricultural environments. Today, the site is used by locals as ‘an informal park, lovers’ hideout and even hunting grounds’ as described by the architects. Responding to the environment, the museum is broken up into a series of independent pavilions. The four pavilions are The Exhibitions Pavilion, the Administration & Amenities Pavilion, the Cafe, and the Main Gate Pavilion.

The Exhibitions Pavilion is composed of the permanent display ‘the Forest of Light’, a space for temporary exhibitions ‘the Clearing’, a storage space ‘the Hollow Boulder’, an observation lookout called ‘the Cloud on Stilts.' The pavilion is open air and has no physical boundaries to limit the space. The floor of the exhibit space is a white gravel, intended to crackle under the step of visitors, tying the project back to the environment. Part of the decision to keep it so open and informal was to encourage people to explore the history of the museum’s artifacts, instead of being intimidated by it and is free of charge to all residents.

The archaeological site dates back to the Late Iron Age and included a temple that been dated to Persian and Hellenistic ages. Discovered in 1946, the most important findings of the site are thousands of small terracotta figurines that were mass produced here in Kharayeb. These figurines play a key role in Shiogumo’s design of the museum. Throughout the ‘forest’ of corten columns, the figurines appear to float. Protected by a glass in the middle of the corten columns, and capped with a domed transparent top, the columns called solar tubes funnel light to illuminate the terracotta figurines.

The Administration and Amenities Pavilion contain the reception, information desk, administrative staff as well as the public toilets and lockers. For the lightest footprint possible on the landscape, the pavilion is elevated from the ground, allowing maximum natural soil preservation.

The Cafe Pavilion is sited on what was formerly the working pavilion from the archaeologists doing the dig in 1969 -- it has since been removed and replaced with the new pavilion. The Main Gate Pavilion is where visitors will leave their cars before entering the KAM grounds and archeological site. Tickets, only purchased by non-residents, can be bought and validated here. 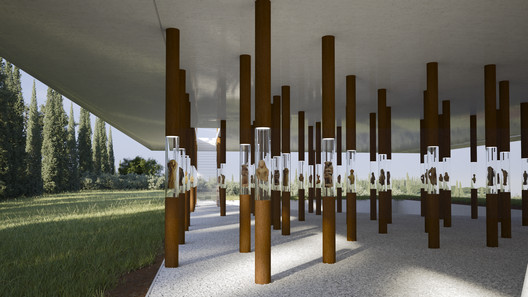