Can architecture and design reverse climate change? Architect and founding partner of Stefano Boeri Architetti (SBA), Stefano Boeri believes it can. Boeri’s Vertical Forest, a project which marries the natural and urban spheres through biodiversity and reforestation, has already come to fruition in Milan, is currently under construction in Beijing, and soon to be constructed in Shanghai. (Watch the video to learn more about Boeri’s Vertical Forest projects.)

However, in the event that humanity is not able to reverse climate change, SBA China and Tongji University’s Future City Lab imagines a new Shanghai in the year 2117...on Mars. Their project, “Vertical Forest Seeds on Mars,” will be on display at the SUSAS 2017 exhibition in Minsheng Port in Shanghai.

Their hypothesis begins with “eco-systemic seeds” which would travel via an interplanetary space terminal and take root on Mars to create an atmosphere suitable for plants and human life. With the help of the app Archi Maker, visitors can experience the future green Martian city for themselves.

The title of SUSAS 2017 exhibition this year is, "This-CONNECTION – sharing a future of public space.” Visitors will be able to see futuristic architecture, urban planning, art, and design for three months following October 15th. 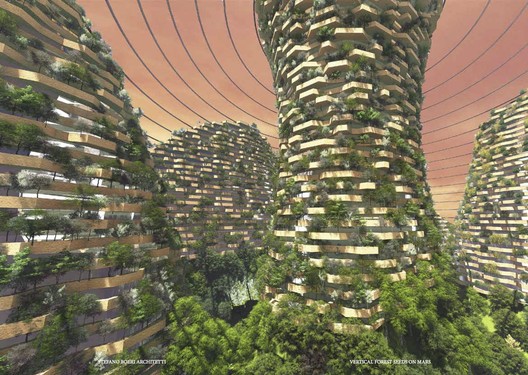