Save
Towards an Architecture of Light, Color, and Virtual Experiences
Share
Or
Copy

This essay by Space Popular references an installation currently on display at Sto Werkstatt, in London. You can experience it in virtual reality, here.

The Glass House has no purpose other than to be beautiful. It is intended purely as a structure for exhibition and should be a beautiful source of ideas for “lasting” architecture but is not intended as such. According to the poet Paul Scheerbart, to whom it is dedicated, the Glass House should inspire the disillusion of current architecture’s far-too-restricted understanding of space and should introduce the effects and possibilities of glass into the world of architecture.

Bruno Taut [above] described his Glashaus for the 1914 Werkbund Exhibition in Cologne, Germany, as a "little temple of beauty"; as "reflections of light whose colors began at the base with a dark blue and rose up through moss green and golden yellow to culminate at the top in a luminous pale yellow.”[1] The Glass Pavilion, designed based on its potential effects on those who perceived it, was supposed to create vivid experiences. The site was the human mind. 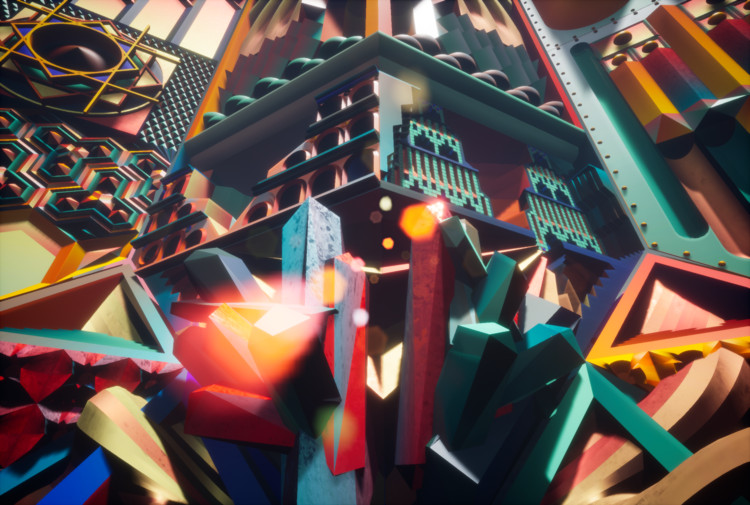 In the Glass Chain correspondence Taut, a leading German theorist during the Weimar Republic, and others—including Hermann Finsterlin, Wassily Luckhardt and Wenzel Hablik—elaborated on radical visions for a future of architecture revolutionized by coloured light. They imagined edifices so beautiful and inspiring that they would drive social and political change; just as the intricate tracery of a Gothic Rose Window might elevate our souls and inspire our minds to “heavenly” realms, these glass temples would explode us into a world of hyper-transparency and bright, futuristic kingdoms of color.

Throughout the 20th Century, glass as a construction material did gradually revolutionize architecture and the built environment. It was, of course, an integral aspect of the Modernist aesthetic; Walter Gropius—an inactive Glass Chain member—forged a path for groundbreaking buildings clad in ever larger sheets of clear glass. These soon became both the norm and a desire. Color was vilified, alongside intricacy and variation. And yet, while the Modernist movement did not give credence to “little temples of beauty,” color and glass would soon have a supreme revival by way of television, the monitor-display and, later, the smartphone and tablet. Today, entire worlds of colored light unfold before our eyes day by day and hour by hour, through vitreous interfaces that we stare into longingly.

Today, glass is our portal to virtual realms and yet, as a building material, often considered to be the least important of all. Glass is never just glass: it is what we see through it, what it reflects back to us, and what it contains. For Sarah Williams Goldhagen:

An experience differs from the unselfconscious fact of mere existence; it is distinguished by its unifying quality, which pervades all its constituent features and gives them meaning. This persuasive unity is the product of the human mind, through which everything we encounter is filtered and interpreted. [2]

As virtual reality looms over architectural practice, architects stand before an enormous demand for experience-focused design. In a world in which perception is almost purely visual—in which other sensations are mentally fabricated in response to image triggers—virtual reality provides a universe devoid of concern, where architecture does not need to shelter us or control daylight. Its purpose is to feed us with experiences.

In this realm of limitless possibility, scenarios that are the most referential to physical reality are the ones which tend to deliver the most powerful experiences. Similarly to how the column in Ancient Greek temples resembled the trunk of a tree, these new universes will be born out of resemblance. In the same way that our built environment has tended towards, new formats of reality will shape us as much as we shape them. Their architecture will influence our behaviour, as our rituals and routines will dictate the spaces around them. Yet what will we build? For whom? And for what?

Virtual reality poses a question of purpose and skill: it asks for an architecture that does not solve immediate problems but that stimulates, communicates, and inspires. It asks for a designer whose skill goes beyond construction and into the understanding of human cognition: grounded, embodied, and situated. With the mind as site, design languages and criteria would be applicable across realities, and practicing in virtual worlds would not necessarily mean a departure from their physical counterparts. With experience as purpose, the aesthetic qualities of architecture will be appreciated as purposeful in their own right.

The potential that Taut saw in glass we now see in the concept and technology of virtual reality. Recent technological developments that allow for vivid experiences of real-time parallel realms mark a paradigm shift in architecture. It’s not so much of a stretch to argue that this shift is on par with the development of parallel projection, or as transformative as the ‘discovery’ of perspective. As a new territory materialises before us—one in which architecture will take on the role of content in worlds in which our primary construction materials will be light and color—the construction site will be the human mind.

"The Glass Chain" (Die Gläserne Kette in its native German) was an exchange of written letters initiated by Bruno Taut in November 1919. The correspondence lasted only a year, and included the likes of Walter Gropius, Hans Scharoun, and Paul Gösch.