Save
Which Cities Have the Most Skyscrapers?
Share
Or
Copy

There’s a lot that the presence of skyscrapers can say about a city. They can be indicators of anything from wealth to modernization to density, or a combination of all three, depending on where you look. This potential to observe trends in a city through the height of its buildings makes data on those buildings valuable to a multitude of industries, so companies like Emporis conduct and distribute research on topics like the newest, tallest, and most expensive buildings in the world. Keep reading to find out about the ten tall cities that are home to the largest number of skyscrapers—as defined by Emporis' definition of a building that is 100 meters or more.

Perhaps more so than in any other city, verticality for Hong Kong is an absolute necessity. The mountainous geography of the city's small islands meant that by the 1900s, Hong Kong was already innovating with vertical building methods to become one of the densest urban centers on the planet. The reality is that there just isn't space to do things any differently. While some architectural standouts exist in Hong Kong, like Norman Foster's HSBC building and I.M. Pei's Bank of China Tower, the city is known more for its sheer height and density than individual buildings. Together, the 1302 skyscrapers create an urban tapestry that has become iconic in itself.

Another notable case of island-prompted architecture, New York City's love affair with the skyscraper dates back to the late 19th century when tall buildings migrated eastward from Chicago. After a population explosion caused an initial need to build upwards, the postwar economic boom in the 1920s made it possible for buildings to be taller than ever before. The Chrysler Building and Empire State Building were built in this period. Today, the city is home to the United States' tallest building, One World Trade Center.

Until 1963, Japan's laws for building standards capped construction height at 31 meters. Shortly after the law was changed, the slablike Kasumigaseki Building in Tokyo became the country's first modern skyscraper. Following the Kasumigaseki Building's construction in 1968, Tokyo steadily increased its number of skyscrapers each year, peaking with several dozen new projects annually between the 1990s and 2000s. Japan's frequent earthquakes have necessitated a strict building code that requires skyscrapers to implement safety infrastructure such as shock absorbers, large foundations, and bases that can move independently from above floors into their designs. Tokyo's tallest skyscrapers are mostly mixed-use office buildings, with the notable exception of Kenzō Tange's Tokyo Metropolitan Government Building, which was the tallest in the city when it was built in 1991. You can find out more about the history of tall buildings in Japan here.

Although it has now dropped to spot number four on the list, Chicago was once the site of what many consider the world's first skyscraper: William Le Baron Jenney's ten-story Home Insurance Building in 1884. The building was later demolished and Chicago's building code later banned the construction of these early skyscrapers, but the city's history paved the way for a second phase in skyscraper design. In the 1960s and 70s, the John Hancock Center, Willis Tower (formerly Sears Tower), and Mies van der Rohe's IBM Building set the tone for a new Chicago architecture based on the International Style. Another important Chicago skyscraper from the same period is Bertrand Goldberg's Marina Bay Towers, which was one of the tallest residential projects in the world at the time of its construction in 1964.

Shanghai is a city divided in two by the Huangpu River, and the eastern side, Pudong, holds its most iconic skyscrapers. As recently as thirty years ago, Pudong was an unimportant annex of farmland and low-rises to Shanghai's longstanding Puxi. Since China's economic boom, it has become the city's financial center, as well as a particularly photogenic piece of the country's display of wealth and modernity. The skyscrapers of Pudong, built from the 90s onwards, are almost painfully futuristic, and the area is a stunning collection of shimmering glass megatowers. The recently completed Shanghai Tower from Gensler is now the tallest in China, and the second tallest in the world.

Another recently, rapidly vertical city, Dubai was a small desert town before the discovery of oil and subsequent creation of the United Arab Emirates in 1971. Even as late as the 1990s, Dubai was almost entirely unrecognizable from the architectural fantasyland it is described as today. Dubai's towers and urban planning are a result of massive investments in new engineering technology, and its two most famous buildings are a testament to this. The Burj al Arab is a 320-meter offshore hotel, and the Burj Khalifa is the tallest building in the world at 828 meters.

Shenzhen didn't exist a few decades ago. In its place was a small fishing village—until 1980, when it became China's first Special Economic Zone, meaning it allowed private enterprise and foreign investments. It is now a major pillar of the Pearl River Delta, one of the country's biggest manufacturing hubs, and has a population of 11 million people. The influx of people and business created both the necessity and financial means for an eruption of skyscrapers, like the Ping An Finance Center—the world's fourth tallest building—that now define the city.

Mies van der Rohe's Toronto-Dominion Centre, a collection of 6 modernist buildings of 222 meters each, were Toronto's first skyscrapers in 1967. In the decades that followed, tall hotels and office buildings moved into downtown Toronto, and the last ten years have seen an increase in soaring condominiums, whose presence has been criticized for being too uniform and alienating to the average citizen.

Like Shenzhen, Guangzhou is another Pearl River Delta city that has seen major architectural growth as a result of its manufacturing economy. Many of its newer skyscrapers are clustered in the downtown area around the Canton Tower, where they frame a large public square and park area with a pleasant, if homogenous, blue glass background. Much of the rest of the city follows a more traditional socialist architecture, where washed-out pastel residential buildings line the streets.

At the time of its independence in 1965, Singapore was undeveloped with little infrastructure. Its economic growth in the 70s and 80s was mirrored by an influx of modernist skyscrapers in the International Style, and progress continued well into the 2000s. By law, Singaporean buildings are only allowed to reach 280 meters, but SOM's Tanjong Pagar Centre was given special permission to build to 290, and has remained the country's tallest building since. Singapore's other tallest buildings span back to UOB Plaza and One Raffles Place, built in the 70s and 80s respectively. 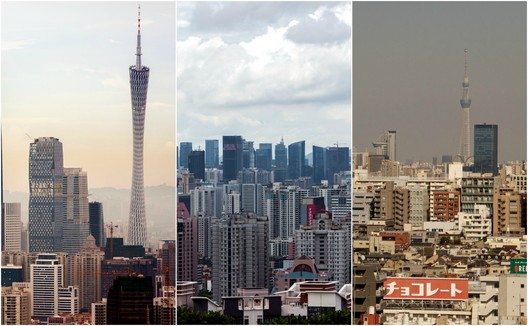