The Royal Architectural Institute of Canada (RAIC) and the Canada Green Building Council (CaGBC) have awarded Montreal’s Bibliothèque du Boisé with the annual Green Building Award for 2017. Designed by the trio of Consortium Labonté Marcil, Cardinal Hardy and Eric Pelletier architectes, the library is situated in the city’s Saint-Laurent district, and received the distinction as an example of “buildings that are environmentally responsible and promote the health and wellbeing of users.”

"The library offers a variety of beautifully lit and welcoming spaces throughout, maximizing daylight and views and the use of natural elements, such as wood, to create an environment that contributes to health and wellbeing,” said the jury. “Their approach to high-performance building through whole systems design and strategy has resulted in an impressive achievement.” 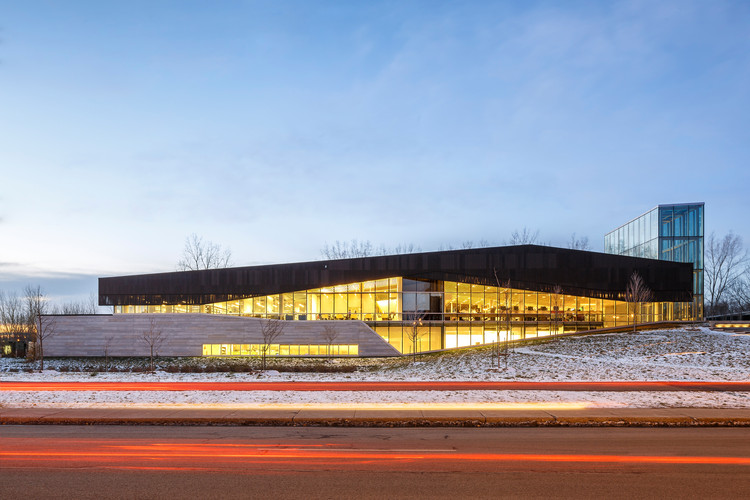 This year’s Green Building Award comes as an addition to a number of international and national awards already received by the Bibliothèque du Boisé, which has also earned a LEED Platinum certification. With a strong emphasis on a seamless integration of architecture and landscape, the 6,000 square meter building incorporates additional programs, including administration, exhibit space and museum archives.

Serving not only as a library but also as a space for communal and cultural interaction, the building employs a number of sustainable design strategies, including an inventive passive heating system which redistributes heat collected in a glass prism. Maximising solar gain, 75% of the library’s floor area has access to natural light and significantly reduces energy usage. Duct requirements were also managed through the use of low-flow ventilation through the floors.

Not only does it have a remarkable dialogue with the urban site and natural habitat, but it also does so with a striking form, expressed the jury.

In terms of materiality, the architects emphasize the use of locally sourced, low-emitting and recyclable materials, primarily constructed from certified wood. The site was also minimally impacted through the preservation of existing trees and the planting of over 100 more. Indigenous shrubs and climbing plants are also features on the exterior, and a nearby wetland is maintained through a stormwater recovery system.

The jury consisted of the following members:

Learn more about the Bibliothèque du Boisé, the winner of the 2017 Green Building Award, below.

25 From the architect. The Bibliothèque du Boisé aims to become a place fostering a feeling of belonging, promoting exploration and discovery. Located between Thimens Boulevard and the Marcel-Laurin Park, it covers a surface area of 5,000 m² and is integrated into the site by drawing on its major elements.

Cast & Place has been announced as the winner of the 2017 City of Dreams competition to create a pavilion for New York City's Governors Island. 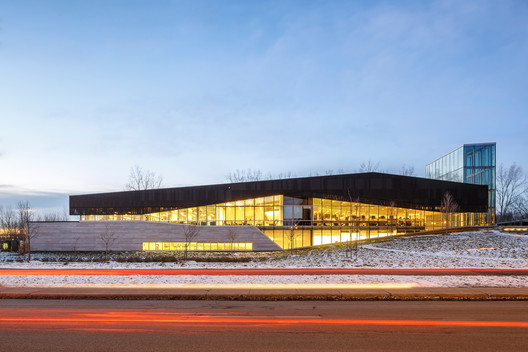