Cast & Place has been announced as the winner of the 2017 City of Dreams competition to create a pavilion for New York City’s Governors Island. Held by not-for-profit arts organization FIGMENT, the AIANY Emerging New York Architects Committee, and the Structural Engineers Association of New York, the competition called for a design to be the hub of FIGMENT’s free community arts festival during Summer 2017, based on questions of the future of New York, how design can confront environmental challenges, and how architecture can be built from recycled or borrowed material.

With these questions in mind, Cast & Place was conceptualized as a pavilion made entirely from waste. 300,000 recycled aluminum cans, cast into the cracks of dried clay, will form structural panels that assemble into shaded spaces for performance and play. 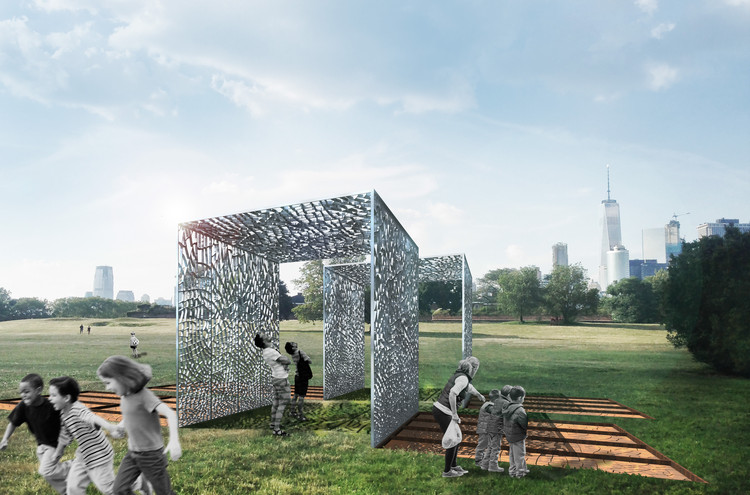 To make these panels, the team—called Team Aesop, consisting of Josh Draper, Lisa Ramsburg, Powell Draper, Edward M. Segal, and Max Dowd—will collect five tons of clay from Flushing, Queens, through the Clean Soil Bank, an organization that facilitates the transfer of earth from excavation sites, lays it out to dry in reclaimed wood molds from Big Reuse. The recycled aluminum cans, partially supplied by recycling center, SureWeCan, will then be melted and poured into the cracked dredge, creating lightweight, strong panels.

At the end of the summer, when the arts festival is over, the pavilion will be disassembled and turned into benches and trellises for the people who helped to support the project.

Cast & Place will be entirely funded through its kickstarter, which is open and accepting donations towards its $30,000 goal until March 27.

Learn more about the project, or support its kickstarter here.

News via: Team Aesop and the American Institute of Architects (AIA).