British green energy company Ecotricity has revealed plans for a new Zaha Hadid Architects-designed green technology hub in Stroud, England. The project, known as the “Gateway to Stroud,” will consist of several greenhouse-like buildings and a wooden footbridge that will connect the campus to the future all-wood stadium for the Forest Green Rovers football club, also designed by ZHA and revealed late last year.

Planned as a center for local sports and sports science, the ECO park will provide state-of-the-art office space for environmentally-focused companies as well as public access to a wide range of health and leisure activities. 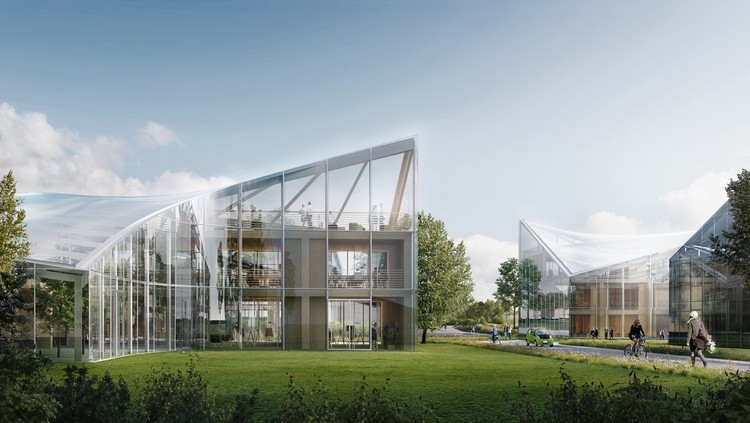 “It will be a place where green businesses and technology companies come together and share ideas: a real focal point of creativity and innovation for the area and a part of the green industrial revolution that’s beginning to take off around the world,” Ecotricity states on their website.

Renderings for the Eco Park show a series of glass-enveloped and wood-slatter buildings maintain the architectural language established by the stadium design. An arching timber footbridge will cross over a 4-lane highway to link the two halves of the campus.

“The bridge design creates one single, fluid form by fusing together individual timber elements. This important, unifying gesture builds connections for the community, conveying Eco Park as a facility for all,” explains a spokesperson for ZHA.

Sustainability will be at the forefront of all design decisions – the football stadium itself will be constructed entirely from wood, and will be powered by renewable energy sources. A future element of the plan will be a expansive nature reserve that will allow the landscape to thrive in its natural state. The concept also includes the potential development of a public transportation hub, which would offer Park and Ride options to Stroud residents.

“With Eco Park we hope to push the boundaries of sustainable development, create 4,000 jobs in the green economy, a world class football stadium and make more room for nature with a big biodiversity boost, as well as create a new ‘Gateway to Stroud’,” said Ecotricity founder Dale Vince.

Ecotricity has submitted plans to the Stroud District Council for planning approval, which the company hopes to receive in the coming months.

Zaha Hadid Architects has been announced as the winner of an international competition to design a new football stadium for the Forest Green Rovers in Stroud, UK. Following a seven month competition featuring over 50 entries from around the world, ZHA was selected over finalist Glenn Howells Architects for their all-wood proposal. 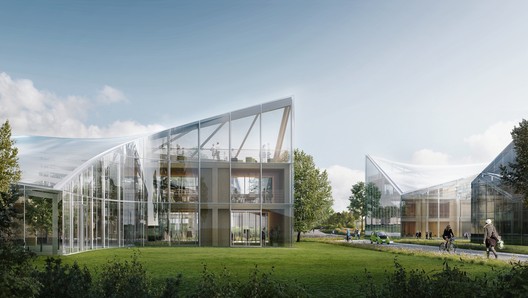