With the help of a vast array of software, Spanish architect David Romero has digitally recreated a series of iconic works by Frank Lloyd Wright, two of which have been demolished and a third that was never built. The three projects were based in the United States: the Larkin Administration Building (1903-1950), the Rose Pauson House (1939-1943) and the Trinity Chapel (1958).

"The 3D visualization tools that we have are rarely used to investigate the past architecture and the truth is that there is a huge field to explore,” said Romero in an interview with ArchDaily about his project Hooked on the Past. Romero worked with AutoCAD, 3ds Max, Vray, and Photoshop while restoring black and white photographs, sketches and drawings of these works. 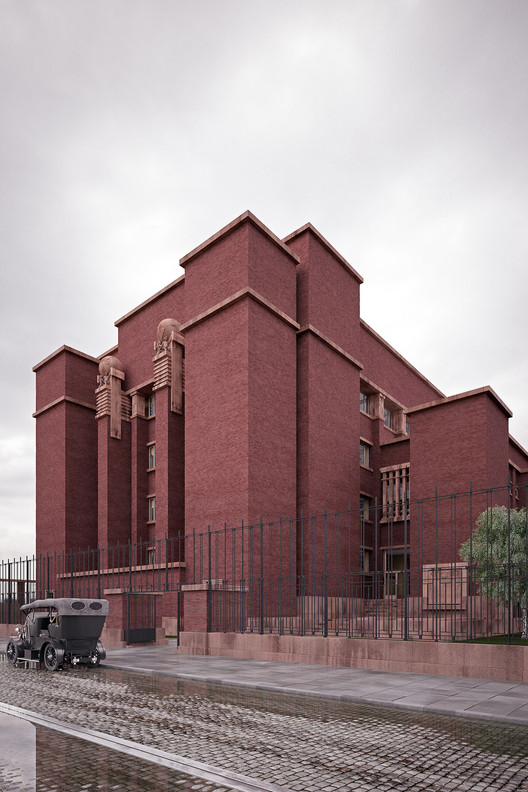 What inspired you to create Hooked on the Past?

I am a person very interested in 3D visualization techniques and their applications, especially those related to the representation of architecture. We are currently living a golden age in the use of these techniques that has practically ended with other types of representation that were once common as the physical models.

As you know there is an industry based on this type of work, either as independent companies or as workers within architectural firms, called 3D Architectural Visualization or Rendering craft that looks at the future of architecture, but what about the past? The incredible tools we have today are rarely dedicated to investigating the past of architecture and there is a huge field to explore: My project Hooked on the past tries to fill this gap.

Why did you choose these works?

DR: From the Larkin building there are no color photographs and the Pauson house there are some but of very poor quality. The case of the Trinity chapel is different because it was not constructed so my work here has been much more speculative, although I try to get into Wright's head and think as he would have done based on other of his works which were built.

The buildings that I choose pass through two filters: First I try to choose relevant works within the history of architecture, although only this filter still leaves us hundreds of thousands of works to explore, so I then choose some that interests me especially which is something much more subjective: I am a great admirer of Wright's work and his work is full of very interesting designs.

What kind of research and development is required in order to make images like this?

DR: I have many Wright books and every project is an excuse to buy some more. Internet is an infinite provider of resources, not just about architecture but of techniques and tutorials 3d and the forum at Savewright.com is full of fans related to the work of Wright who generously helped me in my projects which are a key help for which I am enormously grateful. Lately, have also begun to contact me some academics experts in some specific work who also offer their support. All this help is fundamental so I can develop my work with some rigor because I am no an expert myself in the work of Wright, only an amateur.

Do you have any more projects in mind? What are they?

DR: I would love to model all of Wright's projects that no longer exist and also all that he never built, besides the works of other modern architects like Mies, Aalto or Soane. I am also very interested in all pre-Columbian architecture and in the classical architecture too: Greece and Rome. I have a list in my head of about twenty works that I want to do next. I wish I had more time!

Take a look at the works recreated by Romero below:

This building was designed in 1903 and built between 1904 and 1906, for the Larkin Soap Company in Buffalo, New York. Due to the company’s decline, the building was seized by the city of Buffalo in 1945. Four years later, it was sold to the Western Trading Corporation, that announced it would demolish the building to make way for a truck stop. However, the project was never completed.

This project, commissioned by Rose Pauson, was designed in 1939 and built in 1940 in the US state of Arizona. Two years later, when an ember from the fireplace caught the curtain of a nearby window the resulting fire left the house in ruins. It became a must-see point of pilgrimage for fans of Wright's architecture.

Designed in 1958 for the University of Oklahoma (United States). Due to a misunderstanding between Lloyd Wright and his client, Fred Jones, the chapel was never built. Jones wanted the chapel to be an extension of the university, but the architect designed a new, independent structure. Jones turned down the proposal.