Industrialist and noted philanthropist John D. Rockefeller Jr. was approached in 1928 by a group of leading New York citizens seeking to build a new opera house for the Metropolitan Opera Company. Though Rockefeller himself was not particularly concerned with opera, his sense of civic duty and the favorable economic climate of the late 1920s convinced him to support the project. In October of the same year, he signed a lease with Columbia University for a parcel of land in Midtown Manhattan. Unfortunately, infighting between members of the opera committee and the Stock Market Crash of 1929 led to the project’s demise, leaving Rockefeller with a long-term lease that cost him $3.3 million a year.[1]

Rather than attempt to break his lease, Rockefeller made the decision to build a complex of such exceptional quality that it would attract tenants in spite of the tepid business climate of the early 1930s. Beyond mundane fiscal concerns, however, Rockefeller dreamed of creating something that would leave a powerful impact on the fabric of New York City – an icon that would stand for optimism and hope—the “American Dream”—amid the dreariness of the Great Depression.[2]

Rockefeller’s search for a tenant to replace the Metropolitan Opera Company led him to the Radio Corporation of America, which manufactured radio sets and owned both the National Broadcasting Company and the movie studio RKO. This partnership, which was made official in June of 1930, brought in one of NBC’s radio stars, S.L. Rothafel – more popularly known by his listeners as “Roxy.” With a litany of successful theater openings in his wake, he left the Roxy Theatre to take a new position as director general of the two theaters to be built at the Rockefeller Center. The Roxy Theatre had boasted the highest occupancy of any in the world upon its opening in 1927, and now Roxy once again sought to claim that title for his latest project.[3]

While Roxy may have been a star in his field, the designer chosen to create the Music Hall’s interiors was a relative unknown: Donald Deskey. Deskey, who had previously designed rooms for the Rockefellers’ Manhattan townhouse, was a proponent of the Bauhaus ideal that design should not cling to the past, but establish a new and timeless classicism of its own. He had also attended the Exposition Internationale des arts decoratifs et industriels modernes, the 1925 exposition that became the namesake of Art Deco. His forward-thinking design rationale was perfectly suited to the theme of the Rockefeller Center: “the Progress of Man, his achievements through the centuries in art, science, and industry.”[4]

Rather than rely on profuse ornamentation, as had been typical for theaters before 1930, the Radio City Music Hall was to make its mark through a modern approach and a considered restraint. Deskey designed over thirty spaces, including a Grand Foyer, several lounges, and smoking rooms, each with its own unique individual visual motif. Craftsmen contributed textiles, balustrades, and other decorative elements, while a collection of artists created several murals and sculptures. While Deskey did make use of traditionally luxurious materials like gold and marble, he combined them with new industrial products like Bakelite, permatex, and aluminum. The result was not the typical shock of frenetic ornamentation, but a more subdued, streamlined Art Deco luxe.[5]

To an external observer, the sheer scale of Radio City Music Hall is not readily apparent. While the neon marquee stretches a full city block, the ticket lobby is a comparatively humble space. Once guests pass through the doors, however, they enter into the Grand Foyer – a cavernous lobby standing sixty feet tall. This space was shocking in its muted elegance, with sleekly curved bronze balustrades, full-height mirrors backed with gold instead of the usual silver, and an immense mural composed of the same faded red and gold hues as the rest of the room. Typical theaters of the period mimicked exotic styles of other cultures or the past, evoking a sort of fantastical detachment from reality; Deskey’s design, meanwhile, would have seemed more suited to an upmarket hotel or ocean liner than a theater.[6]

Although the Grand Foyer is stunning in itself, the auditorium is naturally the centerpiece of the Music Hall. A series of proscenium arches, the largest of which is a full sixty feet (18.3 meters) tall, radiates from the stage itself. This stepped series of arches was Roxy’s brainchild; he explained to the press that he wished to recreate, through architecture and lighting, the same effect as a sunrise he had witnessed on a transatlantic crossing. Thanks to the colored lights hidden behind each successive arch, a multitude of visual effects beyond a simple sunrise can be achieved.[7]

The curved ceiling also aided in acoustics, though it would be enhanced by the installation of loudspeakers behind golden grilles in the walls. Technology and architecture complemented each other in this system: the plaster covering the arches absorbed excess sound reverberation, allowing the broadcast through the auditorium’s speakers to be heard clearly and cleanly.[8]

The most elaborate technical achievements, however, were to be found in the stage itself. Various features were included to ensure that the Music Hall would be able to dazzle audiences watching the full variety of stage productions. The stage was split into three sections, each of which could be hydraulically raised or lowered independent of its neighbors. In addition, a circle radiating almost thirty feet from the center of the stage could be made to rotate in either direction, the first time these two capabilities had been combined into a single stage. Even the curtain itself was a technological novelty, with thirteen electric motors driving cables that could allow the drapery to take on a variety of unusual configurations beyond merely being opened or closed.[9]

Though Radio City Music Hall’s opening program on December 27, 1932 was panned by critics and attendees as long and dull, the building itself received no such complaint.[10] In fact, while the lackluster response to the show literally sent Roxy to the hospital, Deskey’s elegant Art Deco interiors were an instant hit with the theater’s visitors. An article published the following morning in the New York Tribune declared that “The least important item in last evening’s event was the show itself...it has been said of the new Music Hall that it needs no performers; that its beauty and comforts alone are sufficient to gratify the greediest of playgoers.”[11]

In the decades following that rainy winter’s night in 1932, the Radio City Music Hall has cemented its status as one of the world’s leading performance venues. 300 million people have attended shows and events at the theater since its opening, and it has consistently seen performances by leading actors and musicians throughout its illustrious operational life.[12] The theater’s interiors are also largely unchanged from their original appearance, thanks to careful maintenance and preservation by Rockefeller interests. Those who come to see a show at Radio City Music Hall today therefore walk into a carefully-preserved piece of history, one that appears to have achieved Deskey’s goal of creating its own timeless beauty.[13] 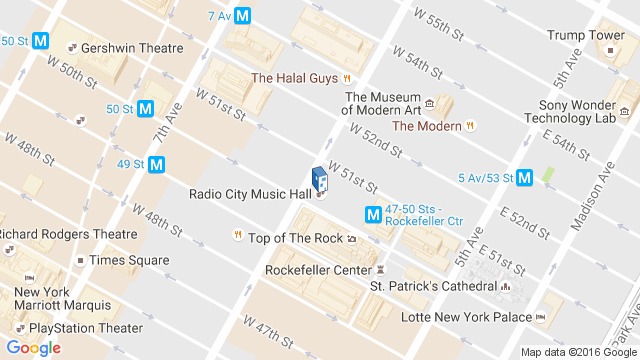 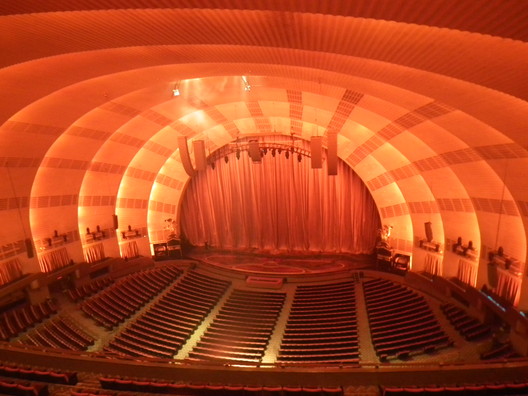