MVRDV’s design for the Dutch exhibition “Hola Holanda” at the Book Fair of Bogotá (FILBO) features a modular system of crates that will be repurposed as neighbourhood libraries after the Book Fair ends. Avoiding the waste of resources created by one-time pavilions, the Dutch firm has introduced a playful element of sustainability to the fair, maintaining its spirit even after the event ends.

FILBO, is one of Latin America’s most important trade events, partnering with a guest country each year to host a main pavilion. This year, the Netherlands and Colombia partook in an exchange of knowledge and culture, with an exhibition designed by Dutch designer Irma Boom and the Dutch Embassy in Colombia.

At the center of this activity, MVRDV’s pavilion circumvents the common problem of pavilions and exhibitions disappearing after an event, rather than benefiting surrounding communities. The pavilions within the Dutch exhibition were designed as a collection of over one thousand “vividly coloured” wooden creates, which can be easily deconstructed and re-assembled.

Each unit uses standardised wooden panels, leaving little waste material, and allowing “unlimited possibilities for reconstruction throughout their lifetime.” After the event, the pavilions will be distributed throughout Bogotá as libraries, and social and education spaces.

“Our design is a village, an accessible, democratic design for all, executed in the best Dutch spirit with some fun,” says MVRDV founding partner Jacob van Rijs. “But it was important also to comment on the trade fair system. Instead of trashing an expensive pavilion after a short use we wanted it to be reused adding long term value to the city.”

The exhibition will be open until May 2. 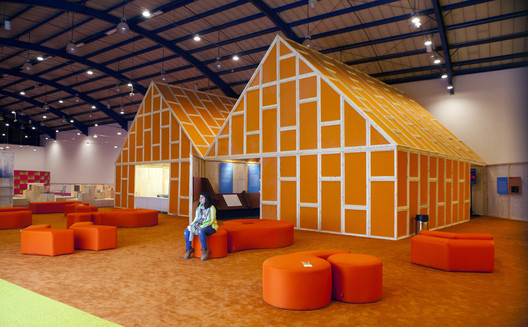