We know there are many more! Tell us your favorite Chicago building in the comments below. 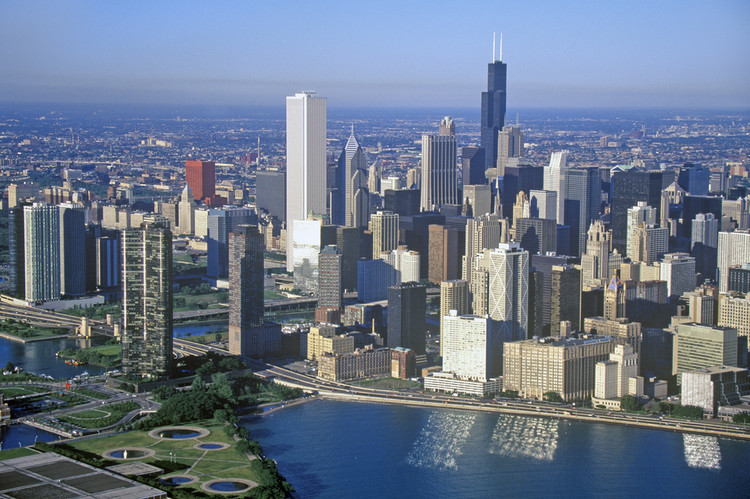 Chicago is often considered the birthplace of the skyscraper, and although the Monadnock Building was not the first, it marked an important turning point in the design and construction of talk buildings. Designed by Burnham and Root, and completed in 1891, the Monadnock Building was the last tall building to employ load-bearing masonry exterior walls.[1] Although iron framing–used for the interior of the structure–had become commonplace, concerns about fireproofing, especially in Chicago, led to a preference for masonry exterior structures. But the thickness of masonry supports increases with the height of a structure, and at sixteen stories the Monadnock Building’s exterior walls required a thickness of six feet at the base.[2]

The Monadnock Building is also notable for its relatively minimalist form at a time when neoclassical decorative elements were the norm. The client for the building explicitly requested that the architects not add any decorative elements.[3] Although the form of the building was derived from the shape of a classical Egyptian column, all of the ornamentation was eliminated from the design, leaving a solid brick shell that flares out slightly at the base and the top. Thirteen story columns of bay windows animate the otherwise monotonous façade, while extending the interior space.

The Chicago area was the epicenter of Frank Lloyd Wright’s early signature Prairie Style work, and his Robie House, completed in 1909, is the pinnacle of the style. The horizontal emphasis and deep overhanging eaves of the Prairie Style reference the wide-open grasslands of the American Midwest, but at the Robie House Wright employs those same elements to create visual separation and privacy on a corner lot in a dense urban neighborhood. Parapet walls around balconies and patios create a separation from the street, and the deep roof eaves shade the windows, preventing views in (and limiting solar heat gain), while preserving views from the inside out. In fact, the main roof cantilevers so far beyond the vertical structure that it requires two steel beams running the length of the house for support. Even the long thin roman brick on the façade emphasizes the horizontality of the house.

The interiors exemplify Wright’s focus on the hearth as the center of family life, with the living room and dining room arranged around a fireplace at the center of an open plan space. As with many of his other buildings, Wright also designed many of the interior details of the home, including art glass windows, light fixtures, and furniture.

After emigrating from Germany, Mies van der Rohe served as the Dean of the School of Architecture at the Illinois Institute of Technology (IIT), where he also designed a master plan for the campus, as well as many of the campus buildings. Mies’s designs for the IIT campus utilized a limited material palette of black-painted steel, glass, and a pale yellow-brown locally produced brick, and were planned using a six foot by six foot grid, all in an effort to manage costs and ease construction.[4] The only building that did not comply with six by six grid was S. R. Crown Hall for the architecture and industrial design departments, completed in 1956, which was designed on a five foot by five foot grid.

The exterior form of the building is defined by the exposed structural system. Four massive steel plate girders span the width of the building, supported at each end by steel columns. The roof structure is suspended from the steel girders, creating a 120 by 220 foot column-free space on the main floor below. The façade of the building is further subdivided using clear glass at the entryway to distinguish from the translucent glass on the lower panels of the main floor that provide visual privacy for the architecture studios.[5] Although the design is emblematic of Mies van der Rohe’s modernist aesthetic, Kenneth Frampton suggests that the regimented rationality of the design was also heavily influenced by the work of Prussian neoclassical architect Karl Friedrich Schinkel, and specifically the Altes Museum in Berlin.[6]

Another example of structural expression, this time in vertical form, is the John Hancock Center, completed in 1970. The design, by Colombian-American architect Bruce Graham and Bangladeshi-American engineer Fazlur Khan of the Chicago-based firm Skidmore, Owing and Merrill (SOM), employs a tapered form and large-scale x-bracing to combat wind loads.[7] The expressive form of the John Hancock Center marked a departure from the delicate orthogonal formality of Mies’ ubiquitous Chicago towers, but where Mies had taken to using steel sections as decorative features, SOM’s exposed structure is functional. Nonetheless, historians Marvin Trachtenberg and Isabelle Hyman described the John Hancock Center as, “subverting what was left of the spirit of Mies.”[8]

Office spaces occupy the lower 40 stories of the tower, while residential spaces fill the upper floors where the smaller floor plates maximize access to natural light, with ceiling heights throughout the building varying to meet the needs of different functions.[9] The top floors house an observation deck and restaurant space, as well as building services.

Though relatively new for a listing of “classic” buildings, Jeanne Gang’s Aqua Tower, completed in 2009, represents the latest entry in Chicago’s history of skyscraper innovation. Inspired by the striated limestone formations found in the Great Lakes region, the floor plates of the building’s eighty stories explode beyond the rectangular slab envelope to create balconies and overhangs. More than just a formal expression, the balconies serve to extend views beyond and between the surrounding towers, and the overhangs help shield the interiors from solar gains.[10] Primarily comprised of residential and hotel spaces, the Aqua Tower also foreshadowed the current crop of supertall residential towers rising around the world.

[3] Gelernter, Mark. A History of American Architecture: Buildings in the Their Cultural and Technological Context. Hanover, NH: University Press of New England, 1999. 211.