Save
Bringing Design to a Broad Audience: The 7th New York Architecture and Design Film Festival
Share
Or
Copy

October has become a busy month in the design world. If you’re living in the United States, New York specifically, it means Archtober: a portmanteau that means the city is flooded with architecture activities, programs and exhibitions, piled onto an already rich design calendar. One of these events is the New York Architecture & Design Film Festival, which started on Tuesday night and runs through Sunday October 18th, and will screen 30 films from around the world in 15 curated, themed programs.

This week, I was able to visit the festival to absorb the atmosphere and speak to the festival's director Kyle Bergman, to learn the ins and outs of this year’s festival, how things got started, and where it will go in the future.

The Architecture and Design Film Festival became a formal affair in 2009, when it had its inaugural event at a local two-screen cinema in Vermont’s Mad River Valley, but was actually started almost a decade earlier in 2000. That was when architect Kyle Bergman began to envision a forum for his love of architectural cinema, one that he hoped could be pivoted into a greater design event. The main objective would be to welcome the general public and to broaden a discipline often seen as overly myopic and insular. 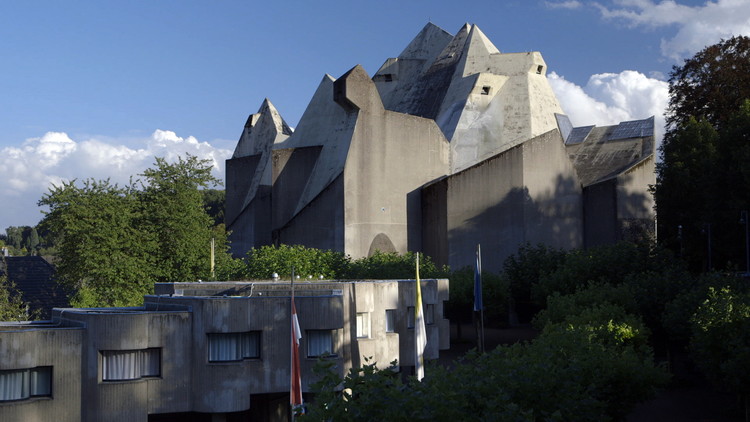 In Vermont, the festival welcomed over 1000 patrons, a mix of those from the New England area, metropolitan New York, and some visitors from farther afield. The festival has since been held in Chicago and Los Angeles, but has most consistently occurred in New York. In this seventh edition, there are over thirty sponsors, including Baldwin, New York Magazine, Diller Scofidio + Renfro, and the Norwegian Consulate General.

“Festivals” says Bergman, “occur in three parts, a combination of curating the films, seeking out sponsorships, and planning the parties and events that accompany it all.” As I sat down with Bergman at the Bow Tie Chelsea Cinemas, a new venue for the festival this year, there was a brief dilemma over a missed delivery of chairs - evidence that the responsibilities of the festival run far and wide, but nonetheless, Bergman and his team have maintained a high level of quality and efficiency.

After hosting the festival at Tribeca Cinemas for a number of years, the larger scale offered by Bow Tie Cinema meant the event could grow in ways that were previously unanticipated. Occupying the theater’s second and third floor, there was enough room to bring in furniture and reserve space for sponsor booths, including Mondaine, a Swiss watch maker that uses Helvetica for its numbers, and the New York bookstore and publisher Rizzoli, here offering current titles and festival-centric fare, with ample seating provided by Natuzzi. Prizes, including chairs and watches, can be won in raffles linked to ballots given to patrons at the start of each screening.

But the more striking addition to this “festival lobby” is a set of virtual and augmented reality (VR/AR) demonstrations, with highlights including an immersive booth of sound and video by Arup m | Lab, a trip to Bjarke Ingels’s VIΛ 57 WEST by Squint Opera, and a journey to Makoko Floating School in Lagos, Nigeria by Azimyth Creation Studio. Collectively, the experiences are meant to give the general public an introduction to virtual reality and to preview the ways in which these technologies may impact architecture, design, and more broadly, life in general. The setup includes a booth by Microsoft and Trimble, to show off their HoloLens technology (which sadly was not accessible to press).

Bergman sees VR/AR as part of the ongoing discussion of changes wrought by media in contemporary life, a sort of “preview of what’s next, if we continue developing this technology.” The narrative inherent to film and the self-made narrative of the virtual world made the inclusion seem obvious and necessary.

Although he says he can’t be sure that there are more architecture or design films being made in raw numbers, Bergman acknowledges it is becoming increasingly easier to make high-quality films on smaller budgets, and this along with a growing audience has yielded a progressive increase in submissions to the festival. This year, over 300 films were reviewed for 30 slots.

Screenings usually include two or sometimes three films, typically a short and a full-length feature. I asked Bergman if he has noticed a direct correlation with trending design topics in submissions; he countered that due to lag that accounts for film production, any direct overlap is purely happenstance. “For example” he said, “last year there were four films we screened on female architects, and that had just never happened before.” This year, The Infinite Happiness, a film about the occupants of Bjarke Ingels’s 8 House in Copenhagen, and David Adjaye-Collaborations, a film on the architect’s relationships with artists and curators, seem suited for the architectural moment.

And because a chief aim of the festival is to widen the design audience, there are several films on topics not widely known. These include Strange and Familiar: Architecture on Fogo Island, featuring a collection of artist’s studios and an inn designed by Todd Saunders at the eastern-edge of North America in Newfoundland, and Henning Larsen–Light and Space, a documentary filmed only a year before the Danish architect’s death, and bringing the work of his firm Henning Larsen Architects - which is famous for projects across Europe and the Middle East - to audiences in the United States.

Two other notable films are past-releases that have been personally selected by Bergman. These include Spaces: The Architecture of Paul Rudolph (1983) and Futuro – A New Stance for Tomorrow (1998), focused on the Futuro House, an egg-shaped domestic relic of space age utopianism designed by Matti Suuronen.

It’s worth mentioning that many of the films also include a Q&A with directors or architects featured, including David Adjaye, and Todd Saunders with Strange and Familiar director Marcia Connolly. Additionally, there are five conversations with notable design professionals that occur on each day of the festival. These are separate ticketed events, with proceeds going to the 14+ Foundation, an NYC-based non-profit which develops, builds and operates schools and orphanages in rural Africa, including the Chipakata Children’s Academy designed by Susan Rodriguez + Frank Lupo + Randy Antonia Lott. A current project is in development with Annabelle Selldorf.

While visiting the festival on Wednesday and Thursday, the scene at Bow Tie Cinema was busy and vibrant, and the new venue seems appropriate for the ever-expanding goals of the event. Bergman hopes that initiatives like this will eventually change the design dynamics in the United States into something more like those found in Denmark or the Netherlands, where the architecture and design discourse has been more widely adopted. Through the films, speakers, booths, and events, and with audiences split nearly 50/50 between designers and the general public, it does indeed appear the festival is on course to achieving its goals. As our conversation concluded several assistants and organizers were waiting eagerly to talk with Bergman; “it takes a village,” he said astutely.

The Architecture and Design Film Festival is at the Bow Tie Chelsea Cinemas in New York, programming goes through Sunday. A full list of the films and festival events can be found here.