Save
Charles and Ray Eames: The Designers Who Shaped the Course of Modernism
Share
Or
Copy

Charles Eames began his architectural study after he was awarded a scholarship to study in his hometown at Washington University in St. Louis. However, after just two years at the university, he left, at least in part due to the school's teaching: he once described how classical architectural training "forces upon the young designer a system of the sterile formula," and a teacher reportedly claimed that he was "too modern." Undeterred, Eames set up a firm with partner Charles Gray, and the pair were later joined by Walter Pauley. In 1938, Eames accepted the invitation of Eliel Saarinen to study at the Art Academy in Cranbrook, Michigan, where he would later become head of the industrial design department.

Nicknamed Ray-Ray by her family, Bernice Alexandra Kaiser was born in Sacramento, California. Her artistic talent was recognizable from a young age, so after high school Ray left California to study in New York City with German Abstract Expressionist Hans Hofmann. She then went on to study at the Art Academy in Cranbrook, where Charles was one of her teachers. Charles divorced his first wife and married Ray in 1941, and the two moved to Southern California where they opened their famous design firm.

They initially supplied the American Navy with leg splints and stretchers during World War II, and following the war, they took what they had learned about molded plywood and applied it to their groundbreaking furniture designs. Their furniture made of cast aluminum, fiberglass-reinforced plastic, wire mesh, and molded plywood was distributed by Herman Miller and brought their studio international acclaim. As early as 1945 the couple became successful enough to design and build the Eames House, the work they are most known for in the architectural realm. Together they also produced over 80 experimental films that showcased many of their philosophies on design.

After Charles’ sudden death in 1978, their office was closed and Ray dedicated all of her time to organizing and archiving their lifetime body of work in addition to collaborating on numerous books about their design studio. Interestingly, Ray passed away on the same day as Charles exactly ten years later, but the significance of Eames Design lives on to this day.

Below that, we've rounded up a selection of videos either about the Eames, or made by the couple themselves. 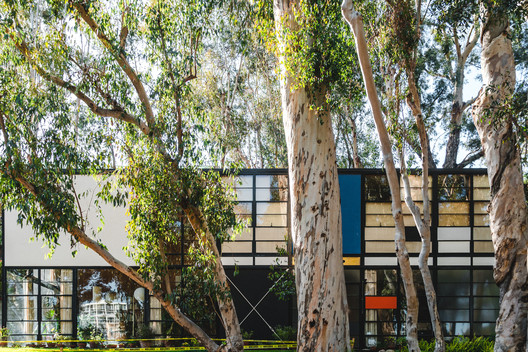