This article was originally published on May 25, 2015. To read the stories behind other celebrated architecture projects, visit our AD Classics section.

Before the impossibly “super-thin” tower became ubiquitous on the Midtown Manhattan skyline, Raimund Abraham’s Austrian Cultural Forum challenged the limits of what could be built on the slenderest of urban lots. Working with a footprint no bigger than a townhouse (indeed, one occupied the site before the present tower), Abraham erected a daring twenty-four story high-rise only twenty-five feet across. Instantly recognizable by its profile, a symmetrical, blade-like curtain wall cascading violently toward the sidewalk, ACFNY was heralded by Kenneth Frampton as “the most significant modern piece of architecture to be realized in Manhattan since the Seagram Building and the Guggenheim Museum of 1959.” [1] 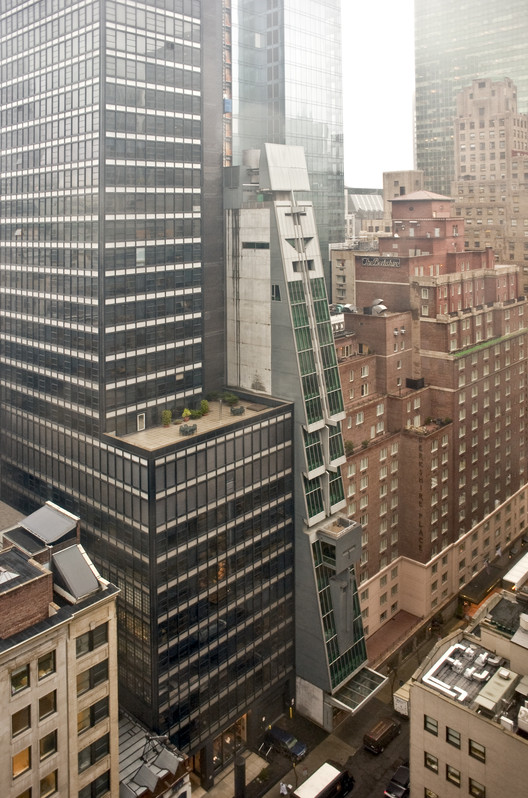 The building, completed in 2002, was the product of an international competition won by Abraham ten years prior. As the name suggests, it houses the cultural branch of the Austrian Consulate in New York, a museum-cum-repository curated and overseen by the Austrian Government. For Abraham, who was born in the Austrian town of Lienz in 1933 and later moved to New York, the project prompted a personal, introspective exploration of architecture’s embodiment of cultural memory.

ACFNY was one of few opportunities Abraham embraced during his career to translate his visionary ideas into built form. He consistently rejected the modernist axiom that architecture needed to be physically erected in order to exist, defending its expressive and polemical value when communicated through other media. In this sense, he belonged to a distinguished lineage of thinkers whose greatest contributions existed unbuilt in the limitless, ambiguous realm of drawing, carving out a space somewhere between the primeval monumentalism of Ledoux and Lequeu and the hallucinatory futurism of Archigram and Lebbeus Woods. There is an emotional quality that distinguishes his work, at times an apocalyptic appeal to a darker side of human nature, articulated both in his drawings and at ACFNY.

In an interview given shortly before the building’s completion, Abraham expounded on this grim aspect of his work, arguing that death “must express itself and its meaning somehow just as do hope or desire.” [2] There is undoubtedly an ominous quality to the “guillotine” curtain wall that stares down the 52nd Street passerby. But it is also intensely compelling, attractive even, eliciting an emotional response of intrigue and suspense. In Charles Gwathmey’s words, it is “incredibly threatening,” but not “in a negative sense. It has the uncompromising presence of an abstract sculpture.” [1]

Despite his preoccupations with the murkier dimensions of the psyche, Abraham still considered himself foremost a functionalist. Approaching the architectural task as a puzzle in need of a solution, he took prescribed site and programmatic parameters as primary determinants of form. The angled southern façade that is now so recognizable was less a product of an expressive gesture than a straightforward reading of the building’s legal spatial limits. “The inspiration for the design came completely out of the trivial circumstances of the site, zoning, codes,” he later said. “And then other things triggered, unconsciously.” [2] This dichotomization of unconscious and conscious impulses allowed him to reconcile the competing demands of his task; moreover, for him, psychoanalytic self-awareness was the only way to achieve such an evocative design. “If I had planned to make a totem, a piece of memory, the building would not have the same strength.” [2] Functionalism, more a method than an end, became a gateway to eliciting architectural desire.

In the minute 25 x 81 foot plot, Abraham places the various programmatic requirements atop one another: galleries, a theater, a library, administrative offices, seminar rooms, and a multi-level apartment for the Forum’s director. But rather than diagramming the project as a stack of horizontal slabs, he conceptually organizes the tower into three separate units, each of them vertical: the structural core, the frontispiece shrouded by glass, and the rear egress stairwell. Each of these different zones has unique experiential and functional properties, and Abraham often described the project as three separate towers butted up against one another. [4]

The third of these “towers,” the rear stairwell, is independently remarkable if often overlooked. Abraham deploys a design solution native to New York, a pair of “scissor stairs” that criss-cross down the rear of the building without intersecting. As the stairs meet the northernmost wall, they appear to slash through the façade, rhythmically and violently rupturing the envelope and allowing light to pour in. Of the 226 competition entries submitted, Abraham’s was the only one that placed the emergency egress at the rear of the building; doing so opened up the fore of the building for programmatic space and allowed the stairs to take on a character of their own. “This solution enabled me to transform an element of sheer utility into a decisive architectonic component.” [1]

In 1996, shortly before construction began, Abraham gave a lecture in Jerusalem in which he described his intentions for the building: "As this tower is a rather small object within the vertical topography of the city of New York, I tried to develop a tectonic vocabulary that would not make the tower rise, but rather the opposite; the point was to make it fall — that falling notion projecting the sense of suspension." [4] This idea drove the project toward a perpetual state of anxious tension, a deliberate trigger of emotional conflict and an appeal to the brooding power of latent memory. 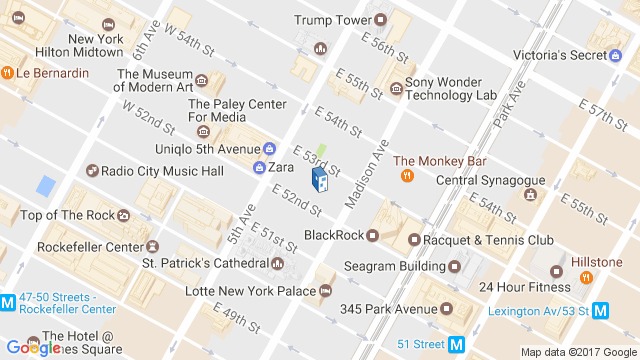