Save
Invisible Cities and the Curtain Wall: The Last Remnant of Modernism
Share
Or
Copy

Snøhetta’s pavilion was designed as a safe threshold between the security of everyday life and the emotional memorial below ground. The brief required the provision of a ‘non-confrontational’ museum entry, and so the oblique curtain wall envelope – disguising the building’s mass and aesthetic identity – enabled Snøhetta to create a pavillion removed from sculptural form-making and instead dedicated to the unseen. The facade, entirely isolated from internal spatial organisation, encloses an auditorium, ticket booths, MEP facilities, family rooms, and a central ramp to the main museum below.

As a practice, Snøhetta are known for their landscape-driven approach, with a focus on extroverted engaging projects that reach out to and absorb their surroundings in a highly choreographed, experiential way. However in this emotionally charged portal building the practice has departed from its usual approach. The curtain wall has been used as a tool to remove the idea of a facade, to create an object at the very edge of architecture. The pavilion appropriately dissolves into a city of indistinguishable skyscrapers. The aesthetic decision to employ the curtain wall allows the building to successfully respond to a sensitive brief, however, it does raise a broader question as to the role the curtain wall has come to play in our cities.

The innovative development over time of the curtain wall system by Modernist architects engaging with a multitude of new technologies to reach an aesthetic goal (and its subsequent escalation) has never occurred before. The only flaw in the system’s development, though, was its dynamism and the unforeseen alignment of the flexible internal working spaces created for a capitalist agenda. With the benefit of hindsight, one wonders: is Modernism the only movement widespread enough to be able to drive the development of technology from an architectural vision? Further, are architects now unable or unwilling to attempt such innovation?

An almost invisible glazed canvas – ‘invisible’ due to its ubiquity at the expense of architectural ingenuity – wraps our buildings and, contradictorily, masks our cities; an exhausted remnant of Modernism’s “form follows function” mantra. Subsequently, a generation of architects neglect to recognise it as an architectural device, and rather view the scope of design engagement as legitimising the marketing of construction methods as products. While the curtain wall system had the purest of intentions (to create architecture in service of light) it has become a benign design tool, a patsy in the architect’s repertoire.

The first recorded curtain wall project is the Oriel Chambers, Liverpool (completed in 1865) by architect and engineer Peter Ellis. A multi-storey glazed wall cantilevers from the concealed cast iron building frame. However it was Mies Van Der Rohe, when designing the Office Building Project (1921) and Glass Skyscraper Proposal (1922), who brought this new structural concept, where load-bearing elements were removed from the facade allowing for the potential of space to be enclosed by a single membrane rather than a solid wall, to the attention of the architectural elite. What transpired was the obsolescence of the window, which often served to locate a building in its surroundings. Instead, it gave way to a new universal response that now serves to marginalise architectural design practice. However while Mies was idealistic about the potential of a single membrane facade, it was the Bauhaus and Modernism’s alignment to engineers such as Owen Williams that saw the curtain wall become a standardised dynamic facade system isolated from creative design input.

Indeed, Walter Gropius’ design for the Bauhaus, Dessau (1925-6) had a curtain wall system – carried over 3 floors with no opaque spandrel panels. Further, Williams’ Boots Factory, Beeston (1931-33) was one of Europe’s largest examples of glazed walls. Although early in the project it was planned to have multi-storey glass walls, this large reinforced concrete building ultimately was enveloped in single-storey glass walls with structure and glazing integrated on an aligned planning grid. As Boots was an American owned company, its style actually emerged from US concrete technology and industrialised construction methods, pushing the British Modernists to experiment with larger scale design. By 1935 Henry Hope’s windows and casements were steadily gaining credence and were installed as a form of glass wall across the UK. Examples of curtain wall abound, and through the vested interests of the glass manufacturing companies in the UK and the US, curtain wall systems became a dominant aesthetic and construction method.

The final innovation in the system, though, was Mies’s Seagram Building, New York (1958): Mies managed to ingeniously employ the highly efficient facade unit as an internal organising system. Mies’s system, with its modular surface, reflected internally as a tool for adaptive spatial planning at a time when a new mentality for flexible working spaces took hold. The integration of modular units into the building skin (for example, office partitions, lighting and airflow systems) allowed for the curtain walls’ domination over the Modern city. It fulfilled not just a Modernist but a capitalist agenda as a framework for the organisation of an agile workforce. Here innovation ended: the curtain wall transitioned from architectural facade to a universal agent of control. The standardisation and cataloguing of the curtain wall came to suggest inseparability of working standards and architectural planning – inferring an equivalence between duplicates and therefore undermining the role of the architect. The Architectural Review even produced a special edition in May 1957 (Volume 121) devoted to curtain wall details, which, ironically, questioned the role of architect as creator through its cataloguing of general technical details and inflammatory title “Machine Made America”. Architecture stagnated.

Its contemporary guise still holds on to the idea that a singular technological system can be employed as a kit of parts in a series of form-making gestures. With the efficiencies of design and standardisation of construction details, architects suddenly retreated from this all-unifying, mass-ordinary phenomenon. Peter Blake’s essay “Slaughter on Sixth Avenue” (New York Magazine, May 1969) recognised the trap that architecture had fallen into, comparing complex entities such as the Rockefeller Center, to the curtain wall usage, which, through its affordable and efficient construction system, was standardising cities. As a consequence, architecture receded to private house commissions, rare public commissions, or corporate lobbies, as the curtain wall became increasingly invincible and paradoxically invisible.

The Modern Movement strove to transform the way people live and significantly altered construction techniques through its advancement of the curtain wall system, but is such ideological strength and innovation now redundant? Is it even possible to make universally important adjusts to architectural practice and theory in todays diversifying profession? Contemporary architecture’s quest for such opportunity has the potential to come from within the universal digital revolution that has taken hold of a new generation of architects. Perhaps this Digital Movement, as the Modernist movement once did, holds a way forward for a unified vision to transform the skyscraper through its international and interdisciplinary tenacity. The discipline today has a rare possibility to offer a new spate of details by which to reframe architecture – possibly less aligned with the construction industry and, rather, informed by and driving the digital industry.

The surface or envelope, in the digital age, has a wealth of possibilities. It could spawn a legitimate heir to the curtain wall, potentially reforming the role of the glass wall as a digital surface to be manipulated and enhanced. Transmission, reflection, refraction, and diffusion in a digital realm have the potential to engage people in unprecedented ways. It may open up opportunities to the invisible canvas of our cities. Light can once again be a method by which architecture is revealed. 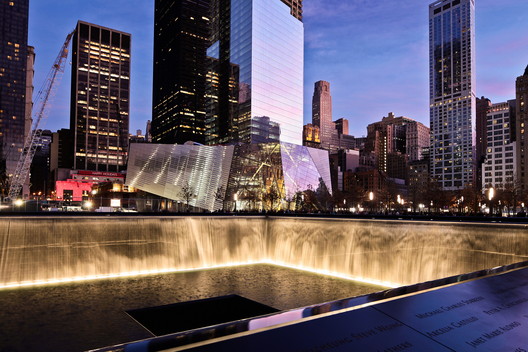