Save
"Moskva: Urban Space" Investigates the Future of Moscow's Public Realm at the 2014 Venice Biennale
Presented by:

In their collateral event for the debut of the Moscow pavilion at the Venice Biennale, the exhibition "Moskva: urban space" explores the historic development of public spaces and examines the city’s progress in the context of Diller Scofidio + Renfro’s winning proposal for Zaryadye Park. Curated by Sergey Kuznetsov, Chief Architect of Moscow together with Kristin Kristin Feireiss from AEDES, and organized by MCA - Moscow Committee of Architecture and Urban Development, the exhibition comes at a pivotal moment in determining the future of urban development in Moscow. As Kuznetsov states, "While the face of Moscow in the past 100 years was largely determined by the architecture of its buildings, representing political and economic developments, today’s urban singularity is based on the “connective fabric” of its public spaces that have become equally important identity-makers and contributes significantly to improving the quality of urban life for its citizens." To see photos of the exhibition by Patricia Parinejad and learn more about the story behind it, continue reading after the break. 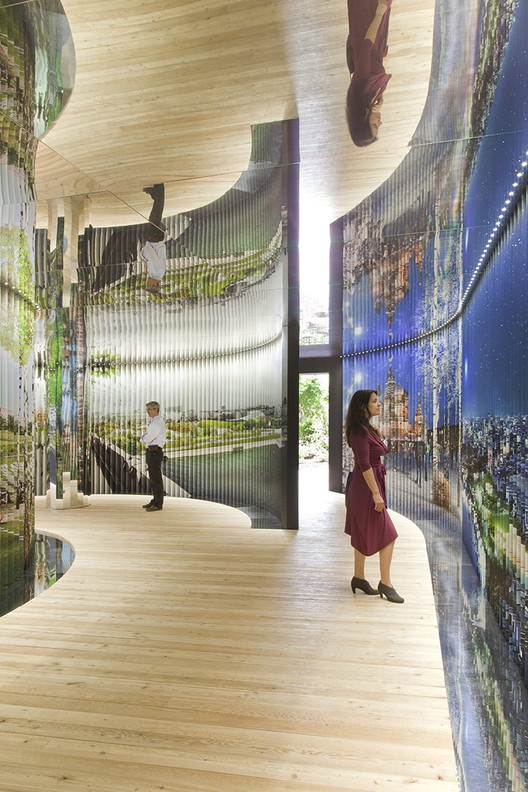 According to the exhibition’s commissioner, Dmitry Aksenov from RDI Moscow, the region has witnessed dramatic changes in public infrastructure in the past several years offering opportunities to reconsider Moscow’s architectural identity. Throughout the early 2000s there was an excess of commercial and residential construction. This development resulted in an increase in density and the loss of many public spaces. Aksenov believes that it is not too late, however, to rethink Moscow’s approach to urban planning.

As documented by the exhibition, Zaryadye Park will be the city’s first new park in over 50 years, and it reflects a desire for Moscow to come to terms with its dramatic growth. The land that the park will occupy was previously the site of a large soviet-era hotel, and recently intended for high-density residential development. However, the effect of the 2008 financial crisis on the international real estate market forced urban planners to rethink the benefits of public spaces in civil society.

Ultimately the decision was made to devote the 14 hectare site to the development of a public park that would acknowledge Moscow’s rich and varied cultural history, while creating a functional urban space to showcase the latest in contemporary design ideas and technology. As this represents a significant new direction for the city, the exhibition features the new designs for the park along with a historical narrative of the city’s urban spaces.

The exposition is set in the halls and courtyards of the Venetian church of Santa Maria della Pieta. Visitors are introduced to the exhibition in a darkened hall with prisms on the ceiling displaying photographs of iconic buildings. The halls progress through the last one hundred years of historic architecture in Moscow and lead to a brighter corridor with wooden flooring and mirrored ceilings to display recent innovations in urban development. Renderings of the concept for Zaryadye Park can be seen on prisms lining the walls, allowing visitors to see different images depending on their viewing angle. The halls lead to an outdoor courtyard where a life-size portion of the Zaryadye Park concept can be seen.

The design for Zaryadye Park aims to recreate Russia’s four biomes by integrating artificial microclimates within the park. Various architectural interventions in the park will enable visitors to experience different temperatures, humidity levels, sunlight and sound. In the exhibition, visitors can experience uniquely shaped heated and cooled concrete wall elements and seats that use new fibreC Bionics® technology, a thermal activated fibre concrete cladding system that has been developed by Rieder fibreC with Transsolar.

The exhibition will be on display until November 23. For more information on the venue and the exhibition hours, visit the project website here.