Located on a small and irregular shaped island at Columbus Circle, one of the busiest intersections in Manhattan, lies 2 Columbus Circle, formerly known as the Gallery of Modern Art. Famously described as a “die-cut Venetian palazzo on lollipops” by Ada Louise Huxtable, the New York Times architecture critic at the time, the 10-story poured concrete structure has been a source of consistent controversy and public response since the 1960s. Designed by Edward Durell Stone, an early proponent of American modern architecture, 2 Columbus Circle represents a turning point in his career. Uncharacteristic of Stone’s prior work, his use of ornament on an otherwise modern structure can be seen as an important precedent of the development of the soon-to-emerge Postmodern movement. 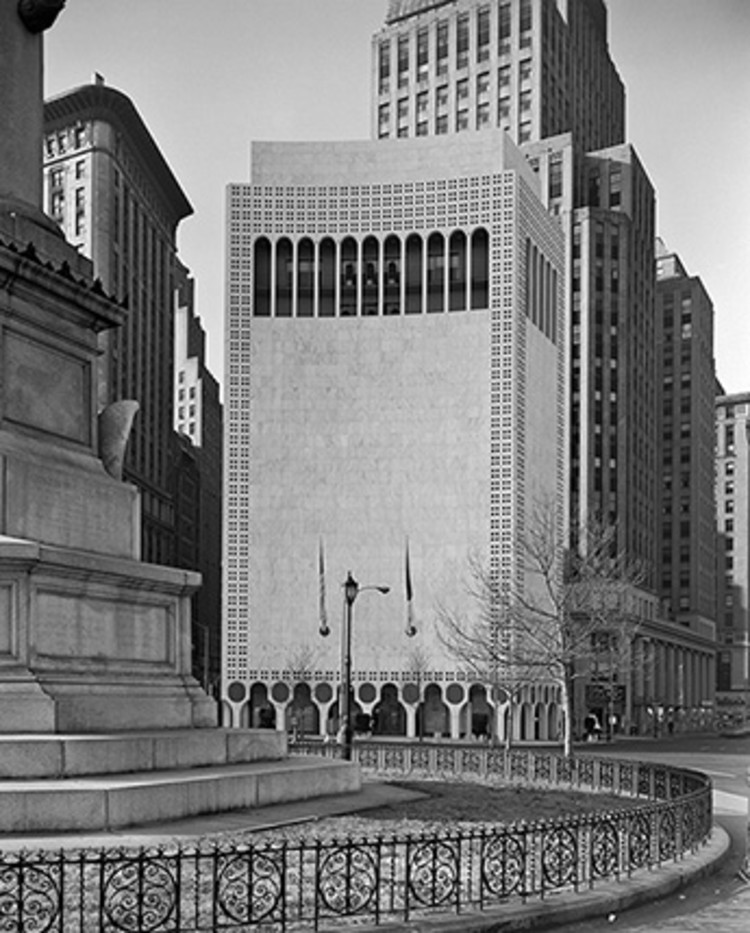 It began in 1956 when George Huntington Hartford II purchased the small lot, surrounded by streets on all sides, with the intention of establishing the Gallery of Modern Art. The gallery would primarily house his own personal collection of 19th and 20th Century art that opposed abstract expressionism, which he considered to be Communist. After mulling over various architects to commission the project to, Hartford eventually chose Stone, with whom he shared many similar philosophies that would guide the design process. Like Hartford, who wished to challenge Modernist ideals, Stone was beginning to dislike the stark glass and metal buildings that were mainstream. Both men heavily valued democratic values, and wanted to make modern design more palatable to the public, to bridge the widening gap between the middle-class and the cultural elite.

Numerous setbacks, including a lawsuit from the Museum of Modern Art, a strike by concrete workers, a change in museum directors, and the unexpected need to blast through solid rock, delayed the completion until 1964. Featuring a program similar to the Museum of Modern Art, which Stone also designed, the first four levels above ground housed artificially lit, permanent and temporary collections. In addition to the 154-seat auditorium below grade, there is generous storage and administration space above the gallery as well as a lounge and restaurant on the upper floors, which utilize a loggia for views of Central Park. With a circulation scheme similar to Frank Lloyd Wright’s Guggenheim Museum, patrons would take the elevator to the fifth floor and gradually descend a half level at a time, as the large landings, which were initially intended for smoking and sitting, also contained art pieces. The gallery’s glamorous interior decor, which bore a stronger resemblance to an upscale residence than to a cultural facility, was intended to inspire visitors to purchase art for their own homes.

The striking exterior, which features a concave north facade to respond to the curve of Columbus Circle, is sheathed with a 2” veneer of gray-veined, white Vermont Imperial Dandy marble. The square marble panels were perforated at the edges of each facade, as well as above the loggia, to create 1472 small and circular bronze-plated windows. Considering the inconsistent site and facade dimensions, Stone considered the use of a ground-floor arcade to be essential to the project. The stylized Venetian Gothic columns inset with Swedish red rose granite ovals, established an articulate perimeter at the building at street level, helping to conceal the varying widths of the building.

Like most projects that push boundaries, its critical reception was mixed, though most critics, like Huxtable, were not fond of the design, often referencing kitsch regarding the use of ornament on an otherwise modern building. Bearing a strong resemblance to Ca’ D’Oro or the Doges Palace in Venice, Stone himself could not deny the influence of Byzantine architecture, the root of the Venetian Gothic style. Others, such as Stuart Preston, art critic for Apollo, felt that “there can be little criticism of the building itself”, recognized the many obstacles that Stone overcame to make the building work.

Regardless of its critical reception, the gallery instantly became a popular destination for locals and tourists upon opening. However, like many of Hartford’s other investments, its success was short-lived, closing after only 5 years of operation, primarily because he could not attract the contributions needed to cover operating costs. Hartford sold the building in 1969 to Fairleigh Dickenson University, creating the New York Cultural Center. The property was then purchased by Gulf and Western Industries in 1976, and given to the city.

The proposal for a redesign of the building was carried out by Allied Works Architecture, and set off a strong effort in the architecture community to preserve Stone’s structure, hoping to give it landmark status. However, after a long and controversial battle, the Museum of Arts and Design was given permission to replace the facade in 2005. Completed in 2008, the structure now showcases a contemporary facade, revealing little of the original design.

During a pivotal time in the evolution of 20th Century architecture, the Gallery of Modern Art demonstrated a high degree of artistic freedom, further illuminating an already existing tension between devoted Modernists and those who questioned the ideals of the movement. Edward Durell Stone’s design acts as a very early example of a project that challenged the established ideals and rules of Modernism. Nevertheless, through controversial designs, multiple shifts in ownership, preservation battles, and continuous public commentary, 2 Columbus Circle remains an eventful site with a long and complex history. 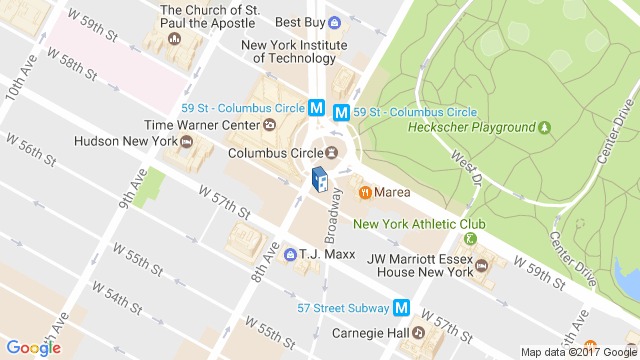