Save
ELEMENTAL's "Half-Finished" Housing Typology: A Success in All Circumstances
Share
Or
Copy

Since they first developed the typology for their Quinta Monroy project in Iquique, Chile, the "half-finished home" has become something of a signature for ELEMENTAL: they have used the technique in multiple cities in Chile, as well as their Monterrey Housing project in Mexico. The typology began life as a way of dealing with extremely low budgets, allowing governments to provide housing to citizens at incredibly low prices, but nevertheless creating homes that would provide for the needs of residents and even gain value over time. Now, they have applied the theory to their Villa Verde Housing project, published just last week on ArchDaily.

Read more about the typology, and how it has been applied at Villa Verde, after the break... 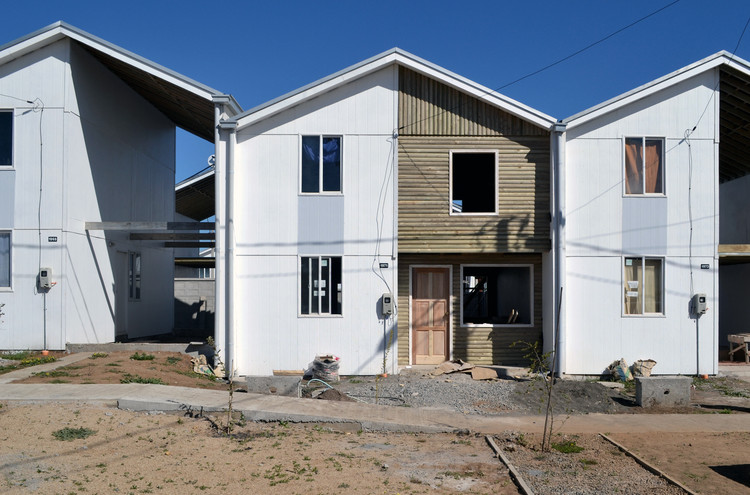 At Villa Verde, ELEMENTAL was able to work with a larger budget than they had previously. Rather than providing housing for the most disadvantaged members of society, they were now designing for people who would make use of the upper bracket of Chile's social housing policy.

Taking this higher budget into consideration, ELEMENTAL believed "we could have taken one of our own more economic typologies and used the extra money to finish them... but we thought of once again applying the principle of incremental construction and prioritization of the more complex components, this time with higher standards both for the initial and the final scenario."

This issue was of particular urgency as the company commissioning the project, Arauco, plans to extend this design to around 30 different towns across Chile, all of them with populations of around 10,000-20,000. ELEMENTAL's research showed that "it is in exactly these types of towns where the worst urban standard is found", and for this reason they felt it more important to focus on the quality of the building rather than its completeness.

Their design for Villa Verde is an attempt to show that their original equation still holds true one step higher up the housing ladder; that there is intrinsic value in this incremental construction process, whether it is used at the cheaper or the more expensive end of social housing. Fundamentally, it is a demonstration that all homeowners are aspirational, and that for many homeowners the best way to account for this aspiration is to provide flexibility and space to expand.

Another new aspect of this particular project is the structure of organizations involved: rather than providing social housing directly for the government, as in previous projects, ELEMENTAL received the commission from a large company which wanted to provide homes for its employees via the government's wider social housing fund.

On an aesthetic level, Villa Verde also shows that there is a certain neighborly quality in this type of development where homeowners have more input into the final appearance of the building. This prevents the potential placeless quality that you might find in a design intended for 30 different neighborhoods across a country, with each address having a personality that reflects that of its occupiers.

Essentially, the Villa Verde project establishes that the typology developed by ELEMENTAL almost 10 years ago at Quinta Monroy - often underestimated as a technique to improve housing conditions for people living in the poorest possible conditions - is much more versatile than we may have ever believed.