The Islamic Arts Biennale re-imagines the Western Hajj Terminal at King Abdulaziz Airport in Jeddah, Saudi Arabia, as a cultural space to create an evocative journey to explore Islamic heritage. The terminal, designed by Skidmore, Owings & Merrill and a winner of the 1983 Aga Khan Award, will be extended and complemented to create the setting for the event. Through the contributions of over 60 artists from over 20 countries, the biennale aims to become a platform to explore and reflect the diversity of the Muslim experience worldwide. Themed Awwal Bait, or The First House, the event intertwines commissioned works with never-before exhibited historical artifacts to convey a holistic perspective of the Islamic arts. The Biennale, now in its inaugural edition, will be open from January 2023 to April 2023. 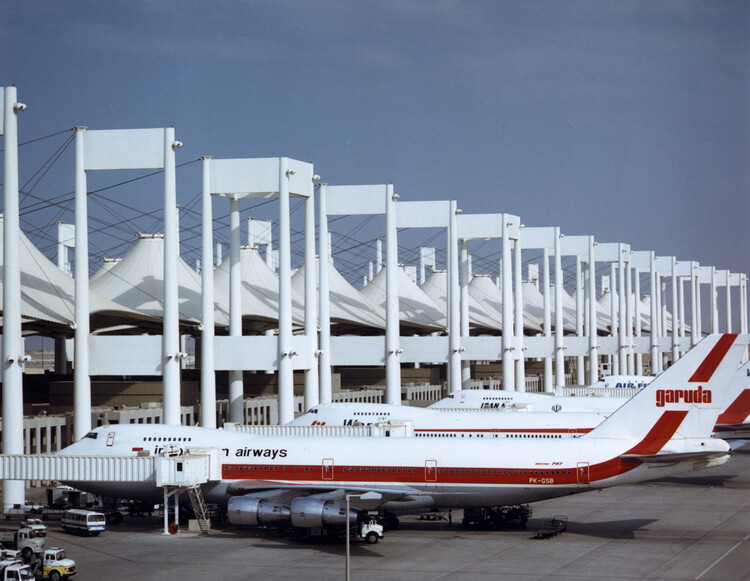 When the terminal opened to the public, it was the world’s largest cable-stayed fabric-roofed construction. The architectural concept of the intervention is inspired by the module of the tent structures of the airport and the image of the traditional courthouses of the past. The design aims not to compete with the complex canopies but to complement them by adopting the same grid and using it as the basis of new construction. The result is a cluster of fragmented volumes escaping the structure of the grid to transform this space into a new cultural venue with its distinct identity.

By using this setting, the importance of the location of the biennale is further underlined, as the city of Jeddah has represented for centuries a junction point for cultural exchange and a port of entry for the pilgrims on their journey to Mecca and Medina. The event represents an invitation to pause and reflect on the rituals that guide people individually yet have the ability to create a collective sense of belonging.

12 Architecture Events to Pay Attention to in 2023

The visitor will experience an evocative journey through five galleries and the grand canopies, spreading over 12,000 square meters of exhibition space. The biennale features two main areas for exhibiting artworks and artifacts: the first one is a sequence of indoor galleries, while the second part consists of two pavilions, Mecca and Medina, and an outdoor area under the canopy of the Hajj Terminal.

The Diriyah Biennale Foundation has selected the Curatorial Team to gather experts from the fields of architecture, archeology, and conservation. Among the curators is Sumayya Vally, co-founder of Johannesburg-based architecture and research practice Counterspace, and the designer behind the 2021 Serpentine Pavilion. She is also part of the World Monuments Fund Board of Directors and serves on several boards through her interest in embodied heritage and supporting new networks of knowledge in the arts. Alongside architect Sumayya Vally, the distinguished curatorial team includes dr. Omniya Abdel Barr, a conservation architect and historic of Islamic art and architecture; dr. Saad Alrashid, an esteemed archaeologist and academic; and dr. Julian Raby, former Director of the National Museum of Asian Art – Smithsonian Institution.

The Western Hajj Terminal and the city of Jeddah are as integral to the exhibition as the works of art and artifacts displayed. Evoking memory and emotion, the Western Hajj Terminal and Jeddah have symbolized ports of entry to millions of pilgrims on their way to Mecca, with Jeddah representing a junction point between cultures, where the exchange of goods and ideas has taken place for centuries. Permanently transforming an urban space into a cultural one is one of our greatest achievements at Diriyah Biennale Foundation. Aya Al-Bakree, CEO, Diriyah Biennale Foundation.

With culture being an integral part of Vision 2030, Saudi Arabia is encountering an unprecedented transformation, with cultural and artistic exchange becoming essential to the country’s growth and development. On a similar note, Kuwait organized the 3rd International Conference in Mosque Architecture to explore the character of religious spaces and buildings in the contemporary context, focusing on community, privacy, and the environment. Additionally, ArchDaily has curated a list of the most anticipated events to pay attention to in 2023.