Architect Daniel Libeskind has revealed plans to transform the Boerentoren tower, located in the center of Antwerp, Belgium, into a new public cultural center. The Art Deco tower will be extended to house exhibition spaces, a panoramic viewing platform, a rooftop sculpture garden, and new restaurants and bars. According to the architect, the original features of the historical building will be preserved, while its landmark status will be enhanced through this intervention. If the plans are approved by the Flemish master builder, heritage and urban planning authorities, and the fire service, the building is due to open in 2028.

The Boerentoren, which translates to the Farmer’s Tower, was built between 1929 and 1932. Designed by Jan Van Hoenacker, it is the first skyscraper on the European continent. Originally designed as a residential tower, it became the headquarters of the KBC bank after the Second World War, when a renovation and extension of the building was carried out. In 1981 it gained the status of a protected monument and became part of the classified heritage of Flanders under the supervision of the Flanders Heritage Department and Heritage Antwerp. Restoration work on the building is underway, promoted by the presence of asbestos in its interior spaces.

The building is planned to primarily house the Phoebus Art Experience, a center that will display art from The Phoebus Foundation art collection with a separate gallery space dedicated to exhibiting the foundation's historic collection of port heritage. According to VRT news, the choice of Libeskind is the result of a competition launched by its current owner, the port operator Katoen Natalie. The same source announces that Daniel Libeskind will work in conjunction with the Belgian architects of ELD.

Images of the proposal reveal an angular glazed structure located at the rear elevation of the existing building, with large amounts of greenery visible from the outside. A glazed volume is also planned to sit over the top of the tower, with a smaller component beneath it attached to the side of the Art Deco building. While the height of the intervention is not yet disclosed, the designers mention that it will not exceed the height of the cathedral, a sensitive issue for the city.

This is not the first project in the city of Antwerp to contrast an angular contemporary intervention with a historical building. Zaha Hadid’s Antwerp Port House repurposes and extends vertically a former fire station to transform it into the new headquarters for the port. According to the architects, the elevated extension was preferred over the proposal of a neighboring volume which would have concealed at least one of the facades of the existing building. 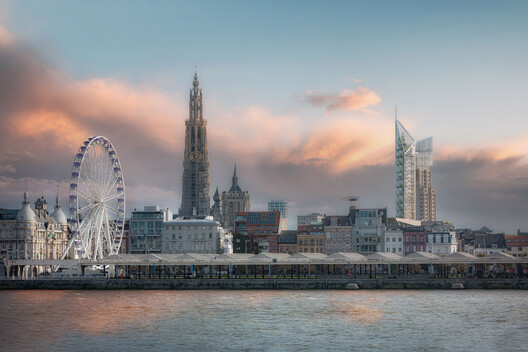