Heatherwick Studio has unveiled an entirely new update for its 1700 Alberni Towers residential project in Vancouver, British Columbia. The new design features extended outdoor living areas with soaring views of the surrounding built environment and landscape, inspired by the province's strong connection with the wilderness, as well as the use of long-lasting, local materials. 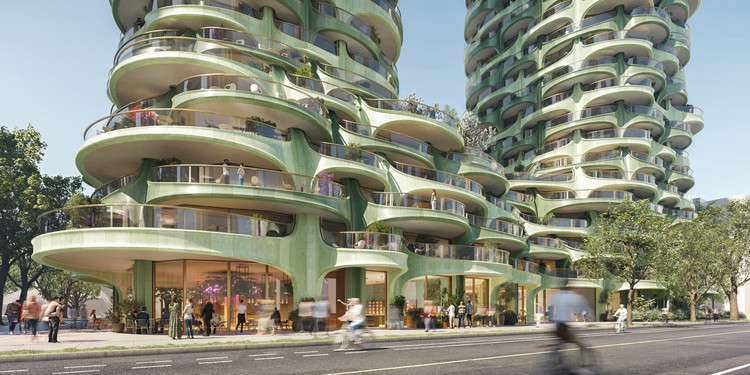 The update comes after the design team saw a need to improve the connection between the towers and the surrounding nature, and to build with material that will last. Heatherwick Studio's vision, which promotes an affinity with the nature and landscapes around it, is formed by a woven pattern that interlocks to create vast outdoor living spaces, one of the project's key characteristics. The design takes influence from the repetitions, rhythms, and softness found in Vancouver's nature, to create a welcoming and less imposing addition to its urban fabric.

The project is further conceptualized with ceramic glazed terracotta, which creates a balance between privacy and the panoramic views. Both towers have been repositioned to be in close proximity to one another, to ensure non-restrictive views of the neighborhood. The ground level is curated to enhance the pedestrian experience with continuous podium terraces, recessive balconies, and greenery, allowing more natural sunlight throughout the project and rich biophilia.

We’ve thought long and hard about how the new design should adapt to what we’re hearing not just in Vancouver, but all over the world about what people increasingly expect of their towns and cities. This is reflected in what they want from new homes. People want bigger and more useable outdoor spaces that create extended living areas, allowing them to take their work or recreational time outside. They want buildings with solidity, personality and depth that feel permanent. -- Thomas Heatherwick

Each tower will have generous balconies that serve as outdoor rooms with views that stretch from Vancouver harbor and the North Shore Mountains to English Bay and Vancouver Island. These transitional zones allow for a "seamless connection" between urban living and Vancouver’s outdoors. 387 residences will be spread across 30 (East Tower) and 39 (West Tower) floors with a shared podium. The development includes recreational amenities such as a pool, gym, spa, wellness facilities, and an outdoor terrace.

Earlier last year, Heatherwick Studio shared plans of the "curvaceous" skyscrapers, which were inspired by tree-like forms to create a "new level of global design excellence" that emerges from a ground level plaza. Initially, the two towers were planned to rise between 30 and 34 storeys. The project was designed to be made from concrete, timber and glass, as well as glazed bronze-colored panels.

The project is developed in collaboration with Kingswood Properties and Bosa Properties. 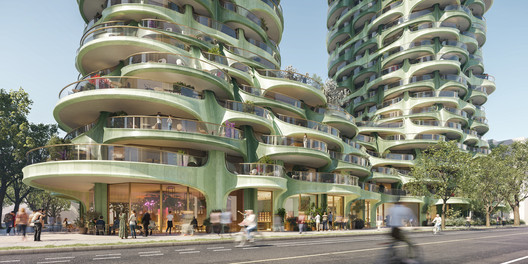