Save
Colonial Connections: The Railway on the African Continent
Share
Or
Copy

There’s a well-known catchphrase – “Cape to Cairo” – that has spawned numerous books and piqued the imagination of countless travellers of the African continent. The phrase’s origins are of imperial nature, birthed out of an 1874 proposal by English journalist Edwin Arnold that sought to discover the origins of the Congo River. This project was later taken up by imperialist Cecil Rhodes, who envisioned a continuous railway of British-ruled territories that stretched from the North to the South of the continent. 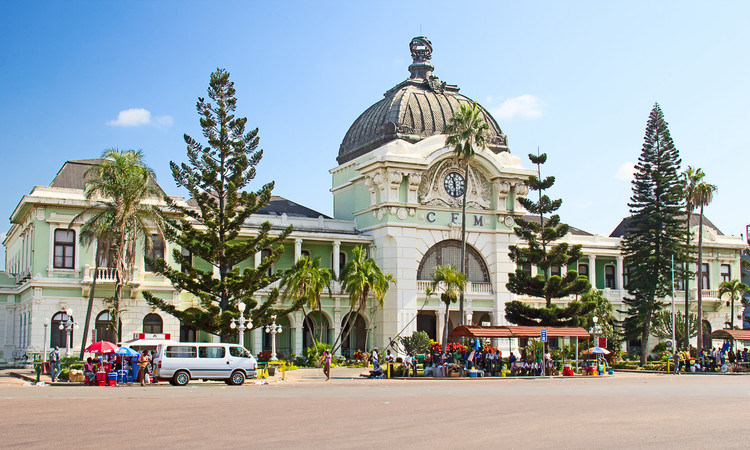 Today’s independent African states have built railways of their own – such as the Tanzania-Zambia railway constructed in 1975 as Zambia sought to eliminate economic dependence on white-minority rule in Zimbabwe and South Africa. However, a large number of railway networks and stations on the African continent have colonial origins, and even though the “Cape to Cairo” railway never came to be, railways on the African continent tell the stories of architecture used to further imperial ambition, and of urban development that forever changed how certain settlements functioned.

This imperial ambition is best encapsulated by one building in particular – the Central Railway Station in the Mozambican capital of Maputo. Designed by Portuguese architects Alfredo Augusto Lisboa De Lima, Mario Veiga and Ferreira da Costa, it is an ornamental structure, with a decorative façade punctured by arches in a Baroque Revival style. Topping the building is a statement piece – a dull-green dome with a globe made up of metal strips. This statement piece is a reflection of how Mozambique functioned as a Portuguese colony in the late nineteenth and early twentieth centuries.

In this period, the introduction of railways in the African continent had facilitated the resource extraction that drove colonialism. Mozambique was uniquely placed – and it functioned as the de-facto trading centre for goods coming out of Southern Africa such as gold from Johannesburg and minerals from Katanga. The Railway Station served as the principal gateway to the Southern Africa hinterland, and for the Portuguese colonialists, served as a symbol of the imperial prowess of the young port city of Maputo.

The opulent, grandiose design of the railway station, from the ornamented pediments to the floral plaster detailing around the clock tower belie the colonial abuses propagated by the imperial regime. Mozambican society during this time was built on the back of a Chibalo system – forced labour imposed on the Black African population. Roads and railroads, and by extension structures such as the Railway Station, were built under this abusive system.

A few years before the Maputo Railway Station was completed – sixteen to be exact – a building of similar scale was opened to the public. This was in South Africa, and it was the Johannesburg Park Station, designed by architect Jacob Klinkhammer. It was a feat of engineering, 154 metres long and 17 metres wide, designed with cast-iron pillars, detailed ironwork, and a glass-domed roof. Johannesburg Park Station and the Maputo Central Railway Station, nonetheless, are two structures that exist within the larger context of colonial urbanism stimulated by railways on the African continent.

The Eritrean capital of Asmara has captured the attention of many contemporary urbanists, and the city’s origins are traced back to a railway. The historically important Massawa port city was the capital of the Italian colony until the year 1900 – when the village was Asmara was viewed as a strategic location for a new capital. The Eritrean Railway was thus constructed, connecting the seaside city of Massawa to what would become the burgeoning city of Asmara.

Asmara’s urban plan was meticulous – responding to the natural topography by combining radial and grid street patterns. The city was divided into differing urban functions, but like all colonial urban planning, this was later used to differentiate the city by race.

Further south of Eritrea, the British railway connecting the coastal port of Mombasa to Uganda created the Kenyan capital of Nairobi. Established as a rail depot, the planning of the city was a calculated effort of exclusion. The early days of Nairobi as a railway town saw a settlement that was catered to European and Asian traders, and European employers in the railway. Asian labourers and Africans were all but abandoned, which in effect gave rise to the informal settlements that still exist in present-day Nairobi.

In Zimbabwe, the capital city of Harare was developed after the construction of a railway linking the city to the port of Beira in Mozambique. In similar fashion to the colonial planning of Nairobi, Harare was envisioned and executed as a divided settlement, Black Africans were forcibly moved off their land, and the city was arranged with low-density residential suburbs reserved for Europeans.

The Maputo Central Railway Station today is still much very in use, while the old Johannesburg Park Station was closed to make way for a newer structure. The railway networks that inform urban connections between many African cities and countries today sadly were borne out of colonial reasoning and sensibilities. Military domination drove the construction of African railway networks, and if not that, then European mining interests and exploitation of African cash crops.

African cities are infinitely varied in how they function today. However, it is illuminating to see how the spatial patterns of so many contemporary African settlements have formed as a consequence of one urban network – the colonial railway.