Save
Refurbishment, Adaptive Reuse and Extension of Apartments in Mexico
Share
Or
Copy 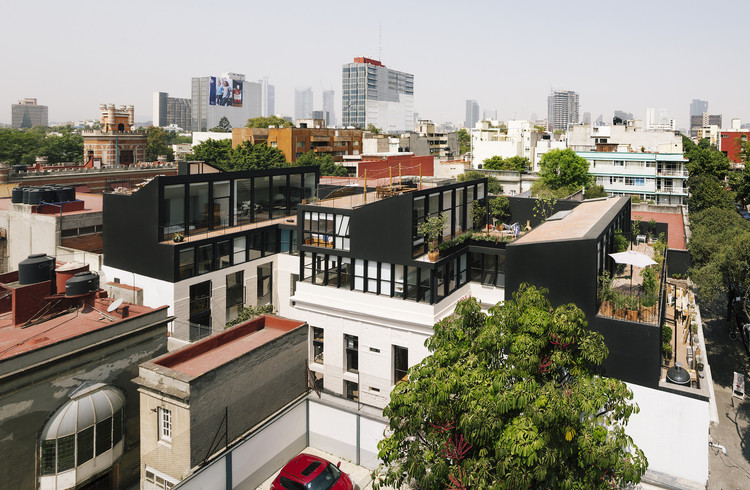 It has become evident that the spaces we inhabit have changed. The COVID-19 pandemic has forced us to appreciate values as lighting, ventilation, and comfort when working in home.

This has sparked interest in remodeling and adapting residential spaces to fit the new conditions and needs. That is why we have compiled a list of built projects in Mexico so that you can immerse yourself in the different spatial solutions that respond to particular conditions.

Our clients, a couple with two sons, moved to CUPA ---Centro Urbano Presidente Aleman, the first modernist residential complex in Mexico-- 15 years ago. Their apartment has 55 m² in two levels. In the access level (12m²) the kitchen and dining room and in the lower level (43m²) a space without partition walls for the three beds, the tv, a sofa, an enclosed bathroom/laundry room, their bikes and lots of boxes where they store their clothes and other belongings. After analyzing the current state of the apartment, the main issues that we identified were the lack of privacy, lack of storage space and the deterioration of floors, stuccos, doors and windows.

Taking advantage of the geometry of the existing structure, a configuration system was proposed by placing cubic wooden elements that house the private spaces, thus organizing different programs. This not only allowed to create of cozy and comfortable spaces for private areas, but it also managed to generate a modular design that could be replicated to generate apartments of different sizes and configurations, adapting to the needs of the market and allowing to take advantage of the reticular condition of the building.

The main objective of the intervention was not to alter the original image of the building and focused on: lightening the building and reinforcing the structure; and replacement of interior and exterior finishes. It was re-cemented and stiffening frames were installed at all levels. In the housing levels, the interior walls were demolished to lighten the structure and give continuity to the space.

This single-family design apartment is located in the west side of Mexico City, in the context of a new and dense urban fabric. The project, although in a new area of development and in a relatively new building, was received in an unacceptable state of conservation and a wasted distribution of resources. The proposed renovation presented an opportunity to enhance a typical luxury apartment with more than the design of its interiors but rather the design of a new living system.

The remodeling started with the clear perspective that interiors are a fair representation of the lifestyle of the user. Thus, an apartment that once belonged to a grandmother and was inherited by a young single graphic designer. He commissioned us this project in which, after cleaning and dismantling the carpets and ceilings, we found a perfectly polished concrete surface. This surface was sealed and left exposed in public areas. A reticulated ribbed slab gave us extra 30 cms, plus the depth of the caissons. This slab was cleaned, left exposed and on it runs the exposed wiring. Finally, we decided to leave the walls bare almost throughout the entire apartment.

The remodeling proposal was raised for a retired couple (Nicanor and Marisela) in search of transforming their space; a home that had a widely functional and practical character. In addition to making the most of every corner of the apartment. Located on the first floor of six levels, the apartment is provided with lighting and ventilation through a central light cube. The first premise consisted in painting the walls in white to understand the light baths inside. In addition to this, the essence of the project responds to the verticalities that in turn configure the different spaces that make up the department.

An apartment from the 60's, originally planned by the Russian architect Vladimir Kaspé in a central area of Mexico City, is radically transformed by Zeller & Moye with the aim of restoring the modernist spirit of its original designer, while at the same time incorporate the needs of a contemporary family life. The 250 square meter house, which is part of a modernist multi-family housing block, is developed along two levels with helical staircases that favor the character of the apartment's spatial fluidity.

This project consists of an architectural rehabilitation of a building dating from the late nineteenth century, located in the historic center of the city of Puebla, Mexico. The rehabilitation work consisted of a restructuring of roofs, original roofs of the beam system of wood, mostly collapsed due to the complete abandonment of the building for 23 years, the rehabilitation consisted of the restructuring of new roofs in a losacero system in approximately half of the roofs of the three levels, this restructuring was done to maintain the original reading of the building with respect to the heights of the mezzanines and the original spatial distributions.

This project is about extending and improving the houses whose original composition has a single bedroom; these houses are overcrowded, generating situations of violence and tension, especially against women. With the construction of this additional room we will be protecting them, thereby generating a condition of well-being and prosperity for half of the population. In order to reduce overcrowding in houses, the INFONAVIT, implemented the "Un Cuarto Más" (“One More Room”) strategy, which aims to benefit more than two million people in urban areas of Mexico. The main objective of this strategy is the development of prototypes that offer solutions of efficiency in cost, time and extension.

A housing expansion prototype that aims to add a 16 sqm room, on the roof of social houses that currently have problems of overcrowding, as they originally have only one bedroom. As this is a construction proposed in wood, it seeks to explore this material from its structural aspect, insulation, light, and a logical building system. In addition to it, this prototype opens a research around the potential of this resource to activate a sustainable economy in the country, which with the correct use of its forests and jungles, new local economies can be detonated, as well as schemes that can focus on the housing crisis, unemployment, and social marginalization.

The building is located in the Colonia Roma, a historic neighbourhood in the central sector of Mexico City. La Roma developed in the 19th century as one of the first extensions of the city centre, with an orthogonal grid of large houses inhabited by the upper classes of the city. With the emergence of suburban life in the 50s, la Roma decreased its population throughout the second half of the 20th century, getting to its worst with earthquake of 1985. The project builds on the initiative of the Urban Recyclingstart-up; the initiative is challenging: build housing on a listed building of historical value, without any parking area –in a city where the car is the king-, and incorporating commercial area in the main floor, in a culture where such condition is typically associated to the reality of the lower social classes, and not understood as an indispensable element for building urban quality.

We uncovered the layers of history of the old La Cubana Chocolate Factory that was founded in 1872 and worked until 2004 in the Santa María la Ribera neighborhood. In this way, we rehabilitate and integrate a housing dynamic with mixed uses and changes in scale. Because of its location and its historical background, this colony has developed neighborhood traditions and uses around a Moorish kiosk. 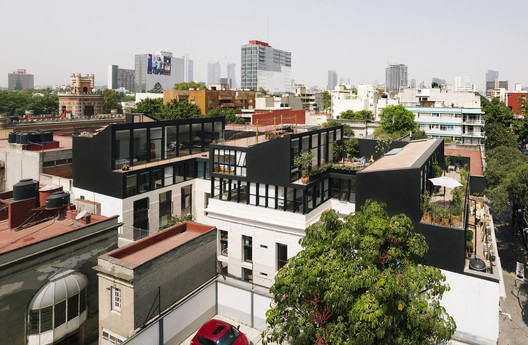