Save
Adapting The Sacred To Be Profane
Share
Or
Copy

It is easy to show cool images of adaptive reuse. The contrast of living history and control over it makes for dynamic visuals. But there is a deeper meaning to adaptive reuse. Architecture embodies humanity and humanity changes, so our buildings change.

After World War 2, the Rust Belt of factory sprawl in and near downtown American cities ended in one generation when a world economy ended the advantage of proximity. Today we’re witnessing the death struggles of the suburban shopping mall as the internet completely reinvents consumer spending. It is now a cliché to say that high-rise commercial buildings will be forever changed by the Covid-induced Zoom-ing of the Office World.

There is another building type in full cultural transformation: houses of worship. The 2015 Pew Study “America’s Changing Religious Landscape” saw a new generation walking away from organized religion. The website Patheos estimates that as many as 10,000 churches close in America each year. The 2017 survey from PRRI showed that 30% of Americans are “spiritual but not religious” and they are predominantly young, so that rejection of organized religion will only grow.

Religious buildings are unique. The act of worshipping together created the need for an architecture that participated in allusion, ritual, storytelling—an almost physical yearning. So these buildings often employ extraordinary craftsmanship, remarkable detail, and exquisite material use. Places of worship produce nothing; they exist to facilitate a connection to a reality greater than the world they’re part of - a daunting task. If the need for churches is waning, how is human spirituality changing? Are we finding God irrelevant, or is culture just evolving away from architectural embrace of spirituality?

The practical realities of this change are obvious. Churches are older, so their sites often have value. In an age of green sensibilities, the embodied energy of these abandoned buildings takes on an importance beyond the economic. But aside from the deeply desired sustainability of being salvaged, we can learn from how we will treat places that once were built to worship God.

While factories are easily recast into storage facilities, housing units, or commercial offices, the revisioning of buildings once created to the glory of the divine is more complicated. Houses of worship are not just history, they attempt a spiritual essence. Deconsecrating a structure removes anything sacred from its use, but does not remove its history.

Change should make us assess our values. In New England America, virgin forests were clear cut over 300 years first to make farmland – leaving 10% of the land forested. Farming moved to the Midwest, when a railroad system made local farming on poor land with short growing seasons a bad idea.  People left those fields, just like they are now leaving places of worship. Some farming still happens, but the glacial moraine filled New England landscape had not only been purged of old growth forests, but those abandoned fields left 238,000 linear miles of collected stone walls behind. Those walls are now buried in new growth forests and may be the single largest evidence of human transition in the world.

I think the transition from religion as a cultural basis in American life to living without a religious presence will evidence a wave of resonant adaptation to our culture. How we treat this flood of change says a great deal about what we value and who we are.

If we ignore sacred intentions, we ignore history. If we pretend that what humans make is sacred it is an oxymoron. The profane, us, only attempt to touch the sacred that is fully beyond we ourselves.  Thinking that humanity can control the sacred is why all those houses of worship are failing. 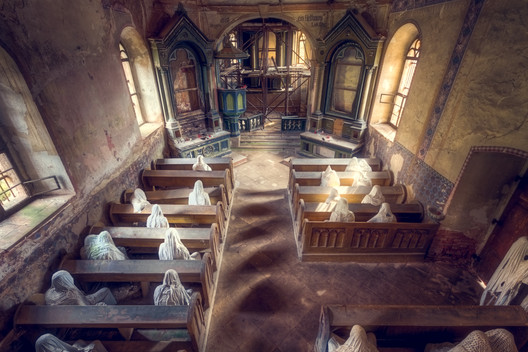