OMA's research and publication branch AMO has taken over the fences of the United Nations Headquarters in New York for a public exhibition showcasing a follow-up of the 2020 Countryside, The Future project. Curated by Rem Koolhaas and Samir Bantal, director of AMO, Countryside at the United Nations, invites reflection and public discussion on the topics of agricultural innovation, ecological change and food production in anticipation of the UN Food Systems Summit taking place in September 2021. 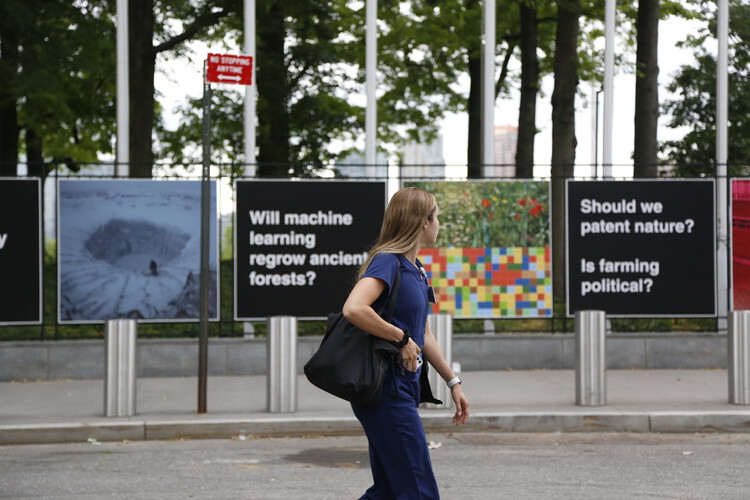 Countryside at the United Nations is a continuation of Countryside, The Future, the exhibition organized in 2020 at the Solomon R. Guggenheim Museum, which aimed to bring into focus the 45% of the world's population living outside urban settlements, within a professional discourse dominated by the notion of urbanization. Under the term "countryside", the research directed by AMO over five years brought sociological, scientific and political perspectives around the 98% of the Earth's surface not occupied by cities. Countryside at the United Nations brings a renewed discourse on the countryside, featuring a series of questions and images illustrating rural transformations of various kinds, "from the Siberian Permafrost to high-tech Dutch greenhouses".

Rem Koolhaas and Samir Bantal, curators: Countryside at the United Nations is a condensed version of the research presented at the Solomon R. Guggenheim Museum, re-interpreting the results of the investigation and the goal of the show. What if the next revolution were happening in the countryside? Amid a global pandemic that propelled the world to rethink the way it functions, can Countryside's questions prompt reflection and action inside one of the world's most important international organizations? – curators Rem Koolhaas and Samir Bantal

AMO / Rem Koolhaas Presents "Countryside, The Future" at the Guggenheim

In light of pandemic recovery plans, the UN will hold a summit addressing global sustainability around equitable food systems in September. Launched with the support of the Permanent Mission of the Kingdom of The Netherlands to the United Nations, the project highlights the countryside's potential for transforming these food production systems. The exhibition installed along a perimeter fence beneath the line of member states flags is on display until July 29th.