Save
AMO / Rem Koolhaas Presents "Countryside, The Future" at the Guggenheim
Share
Or
Copy

Opening in February 2020, the Solomon R. Guggenheim Museum is showcasing an exhibition by Rem Koolhaas and AMO, the think tank of the Office for Metropolitan Architecture (OMA). Entitled Countryside, The Future the exhibition seeks to investigate urgent environmental, political, and socioeconomic transformations in the nonurban areas.

Looking to research the radical modifications that are changing the rural part of the world, Countryside, The Future highlights the work of AMO, Koolhaas, and students at the Harvard Graduate School of Design; the Central Academy of Fine Arts, Beijing; Wageningen University, Netherlands; and the University of Nairobi.

Shifting from the contemporary city to non-urban areas, Koolhaas is exploring new grounds through his recent investigation venture. The studied countryside is in fact a compilation of rural, remote, deserted, and wild territories, forming 98% of the earth’s surface. With global case studies, the countryside is showed as a frontline of transformation. Underlining evidence of dramatic transitions from the many examples studied, the Guggenheim exposition re-focuses the attention on these “forgotten areas”. Countryside, The Future offers speculation on the future.

What Will the Countryside be for When We All Live in Cities?

In the past decades, I have noticed that while much of our energies and intelligence have been focused on the urban areas of the world—under the influence of global warming, the market economy, American tech companies, African and European initiatives, Chinese politics, and other forces—the countryside has changed almost beyond recognition, […] The story of this transformation is largely untold, and it is particularly meaningful for AMO to present it in one of the world’s great museums in one of the world’s densest cities. -- Rem Koolhaas.

Along the spiraling ramp of the Guggenheim Museum’s rotunda, visitors will encounter thematic groupings of images, sounds, objects, and texts that interweave references from across time and space.

Open to the public from February 20 through summer 2020, the immersive and multisensory installation explores the realm of “artificial intelligence and automation, the effects of genetic experimentation, political radicalization, global warming, mass and micro migration, large-scale territorial management, human-animal ecosystems, subsidies, and tax incentives, the impact of the digital on the physical world, and other developments that are altering landscapes across the globe”. 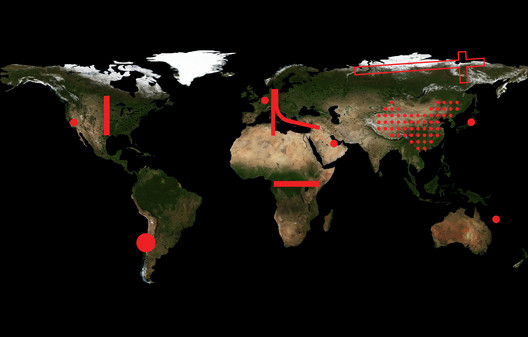