Dozens of neighborhoods in New York City have been upzoned based on contrived, and even false claims made by the city, which promised more diversity, affordable housing, minimum displacement, and other worthy goals. None of those projections materialized, but this is never acknowledged. Worse, the upzoning created the opposite conditions: less diversity, fewer affordable units, and whiter, wealthier neighborhoods. This, too, is never acknowledged. But the damage is done—and developers are having their way—following the new zoning. Then it’s onto the next neighborhood, with the same approach. Roberta Brandes Gratz explores in her article city planning and city promises in New Tork City, disclosing zoning regulations that lead to the opposite of what they preach.

The official story promoted by the city about planning and development is really about gaslighting, convincing the world something is different from what it really is. Now comes the proposed upzoning of SoHo/NoHo. This proposal is a textbook example of the city at its most disingenuous. The SoHo/NoHo scheme is based on the same false assumptions and untruths.

In good gaslighting tradition, for example, the city doesn’t reveal that the SoHo/NoHo zoning district includes part of Chinatown, and will impact even more of that neighborhood. In the argument for diversity, it won’t tell us that 40% of the current neighborhood is already nonwhite, including 28.4% Asian. The city claims there will be little or no displacement, but it’s not telling us that 635 rent-stabilized units in 105 buildings within the rezoning district have been identified as threatened by displacement. These units are disproportionately occupied by Chinese and Chinese American residents and, due to their scale, are most likely to be demolished. It won’t tell you that the Chu family, a Chinatown developer, lies in wait. It also won’t tell you that a substantial number of residents with low-to-to-moderate incomes already reside in the neighborhood, and will likely be the first ones displaced.

The proposed upzoning of SoHo/NoHo is a textbook example of the city at its most disingenuous. The scheme is based on the same false assumptions and untruths.

In fact, a study commissioned by the Greenwich Village Society for Historic Preservation contradicts in clear statistical and pie chart fashion all of the unsupported claims made by the city about the zoning district. The report is aptly titled Upzoning SoHo and NoHo: Why the City’s Rezoning Plan Will Decrease Socio-Economic Diversity and Reduce Net Affordable Housing. Another less publicized report, commissioned by the Municipal Art Society (MAS), A Tale of Two Rezonings/Taking a Closer Look At CEQR, studied two already upzoned neighborhoods and came to the same damning conclusion.

According to MAS, the two neighborhoods, Long Island City and Downtown Brooklyn, are now “whiter, wealthier, and more crowded than ever.” The report notes that “the expected boom in commercial development never happened. Instead, these neighborhoods were transformed by an explosion of high-end, high-rise, residential development.” At the same time, the local public schools have been overrun.

Sadly, the city never looks back and says, “Oops, it didn’t happen the way we said it would, so maybe we shouldn’t make the same promises in the next neighborhood?” Those unacknowledged facts have no impact whatsoever on the next set of false promises.

In fact, the city promotes—and the press perpetuates—the idea that this upzoning is meant to democratize and diversify the SoHo and NoHo neighborhoods. The one-time manufacturing buildings converted to artists’ housing and then high-end apartments are included in the larger zoning district. But they’re the convenient visual front for a larger deceptive story that, in the end, will result in whiter, richer neighborhoods, just like Downtown Brooklyn and Long Island City. Similar studies would probably show the same thing in other upzoned neighborhoods, but no one is footing the bill to study them (and certainly the city does not want to assist them in that research).

The Greenwich Village preservation society report outlines numerous flaws in the city’s environmental impact statement, as well as the vast discrepancies between the promised change and current reality: “New developments under the City plan would have a much higher share of highest income earners as compared to the current neighborhood, a much lower share of the lowest income earners, and none of the nearly 20 percent of the neighborhood which currently earns under $32,000.” These circumstances have been true in other upzoned neighborhoods because the scale of the allowable new buildings is so huge, the number of high-end apartments so plentiful, and the promised new “affordable” housing is never as affordable as the housing that is lost.

It’s such an outrageous lie—claiming that upzoning will help solve the housing crisis—that it’s difficult to believe the city can keep repeating it with a straight face.

“The city assumes no development will take place on any site currently containing rent-regulated housing and no low or moderate-income residents will be displaced,” the SoHo/NoHo report states. “This is simply not based on reality, or borne out by the facts.” (Emphasis mine.) The City also excludes from their projections the possibility of housing with rent-regulated units or houses of worship, private schools, or other institutions from being demolished and redeveloped, even though we see this happen time and time again. Its assumptions have been wrong in virtually every upzoned neighborhood throughout the city, and as a result, we’ve lost thousands of rent-regulated and non-regulated affordable housing units. It’s such an outrageous lie—claiming that upzoning will help solve the housing crisis—that it’s difficult to believe the city can keep repeating it with a straight face. The real estate community is delighted, of course, with the increasing loss of rent-stabilized apartments.

The politics of upzoning and the pull of real estate money is so strong that even City Council representatives who would be expected to sympathize with the community are swept up in one falsehood after another.

It is all so hypocritical! Take, for example, the constant promotion of affordable or low-cost housing. The city is officially all for it. So is the civic community and the press. Yet, the quickest two ways to achieve big numbers of low-rent housing over the largest geographical area of the city would be to legalize and financially assist in the development of basement apartments or secondary units in the back yards of single-family neighborhoods. More than 100,000 units (some estimate 200,000) could emerge from a zoning and financing plan that legalizes this housing form. But there is nothing in it for developers, who would rather claim the financial incentives that come with new construction, even when it replaces or pushes out existing and more honestly affordable units. To be sure, nothing in this initiative involves developers. Instead, the benefits, financial and otherwise, would accrue to homeowners. In the rush to upzone neighborhoods all over town during the Bloomberg administration, single-family neighborhoods—fearful of what developers would do, or who might move in or of losing on-street parking spaces—were downzoned to prevent gentle, gradual, effective change. No one hears much about these truly Not-in-My-Back-Yard neighborhoods.

Instead, whenever there is a proposal of any kind that intrudes on a historic district or affects an as-yet-undesignated historic district, it is always the preservationists who are accused of resisting needed change. Preservationists are the most popular whipping boy. But SoHo and NoHo, great designated districts, have undergone enormous change in recent years, even with designated status. The neighborhoods are filled with new buildings, taller and more modern than older structures. When I served on the Landmarks Preservation Commission, I voted for those new buildings that appropriately added a contemporary layer to the historically rich area. But those buildings stayed within the context of the existing community, something this new zoning proposal flauntingly does not.

There are probably more than 40 new buildings in these two designated historic districts, but they do not impair the essential historic character. This is the kind of appropriate change that adds a new layer of history without destroying the old while retaining existing diversity. The new zoning plan will make a mockery of this equitable pattern.

Edison Parking, for example, a big de Blasio contributor, owns the two largest empty lots in the proposed upzoning district. One site, at Great Jones and Lafayette, would allow a FAR of 200 feet, the highest allowable in the state. If the purchase of nearby air rights is added, SoHo could have its very own supertall. The second site, in NoHo at the edge of Chinatown (Baxter and Centre Streets), would allow a 9.7 FAR, which with accumulated air rights would overshadow Chinatown and have a negative impact on that largely affordable neighborhood. The city promises a height limit. But given the false and distorted premises of the SoHo/NoHo/Chinatown rezoning proposal, can we really expect a reasonable solution? 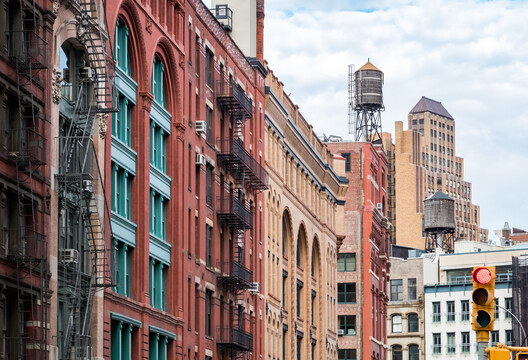