Save
Cloth and Linen Walls: Translucent and Weightless
Share
Or
Copy 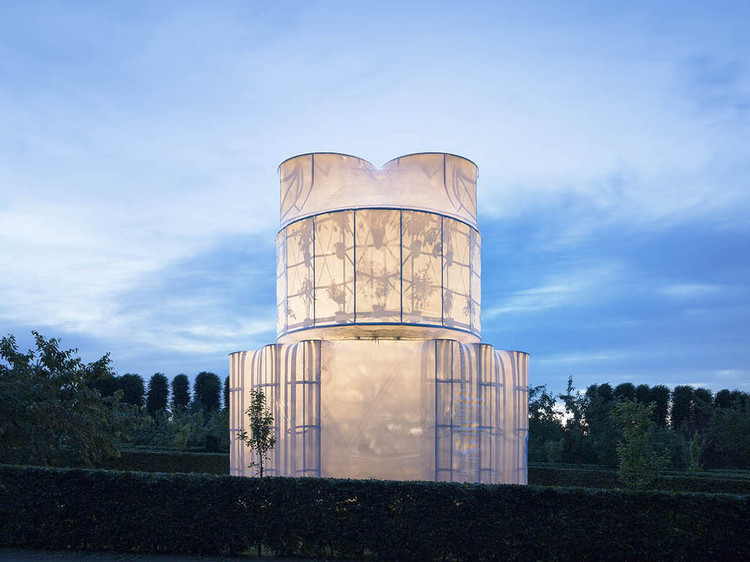 Whether made from natural or synthetic fibers, textiles have played a part in architectural design since time immemorial; however, it wasn't until the era of industrialization and advancements in technology that high-quality textiles could be made and utilized en masse. Most often, they have been used to enclose temporary structures like medical tents and emergency housing thanks to their mobility and ease of assembly.

The use of cloth in architecture offers an array of advantages, especially when considering its ability to absorb sound, filter light, provide privacy, and mitigate temperatures.

In spite of these properties, however, the use of cloth in architecture has been limited almost exclusively to use for temporary structures such as tents and emergency shelters. Luckily, more architects are taking advantage of cloth's unique and practical properties and showcasing them in their work.

With the ability to filter and project light while simultaneously acting as a solid surface, cloth and textile walls allow their users to create unique visual displays, transforming buildings into giant lanterns and allowing passersby an ethereal glimpse into their interiors.

In this article, we highlight ten projects from across the globe that feature textile elements and use them to create dynamic and variable surfaces.

“Each living room takes the whole unit width and links with carpentry that enables the balcony fusion, creating a new transitional space between the open and the covered, between the outside and the inside. The building’s façade accompanies this transitional process: the sliding panels, made of stretched fabric, while collaborating with thermic control, lightning, acoustic absorption, and energy savings, generate throughout the day, different dialogues between those inhabiting the building and the environment that contains it.”

“The façade as well as the counter-faced are worked in two planes, one glazed that allows a great light and complete visuals and another textile that works as a screen that regulates the climate and the interior privacy, filters the visuals of the street and average the entrance of natural light.”

The enclosure is materialized with a vegetable mattress that protects the three facades exposed to the sun, while incorporating a space for leisure where nature finds its desired protagonist. The microperforated awnings placed in both facades return towards the city a veiled picture of the vegetation they enclose, echoing the ambiguity the building is intended to set up.”

The JMG project is a Gym-Tent, which serves as a large covered space for the school's youth to play sports and engage in other activities. The idea was a metal-framed structure encased in white cloth--forming a large tent. The cloth material allows for transparency and natural lighting within the space and also transforms the building into a giant lantern at night.

“The façade panels are made of a mixed metal structure of steel and aluminum wrapped in a medium gray textile developed specifically for outdoor use. This translucent mesh fabric is lit with RGB LED reflectors, these are component parts of an automation system that controls the building allowing color changes. This façade is also made of exposed dark gray metal structures with large glass surfaces in certain areas.”

"The pavilion consists of 20 triangular modules. The components are all different but share the same formal, constructive and material logic. All materials used are of organic origin (linen and wood) and obtained locally. All industries and companies involved in the process are medium scale and located within an 80km radius of Barcelona."

"The project rehabilitates the existing buildings that make up the old square. To complete the center’s functions, we build a third volume as a large container to house a film set, located at the southern corner of the square. A tensioned fabric envelope surrounds this container and spreads like a fog that embraces and connects the three buildings, defining a concavity towards the square where the access to the complex will be located."

"The architecture of the building transports the teaching content of the academy to the exterior, making the various use of textiles tangible from afar. The 3-storey building is surrounded by a textile façade. Like the drapery of a curtain, the silvery shimmering fabric undulates around the angular concrete cube. The slightly transparent, seemingly mobile membrane forms the greatest possible contrast to the strict geometry of the underlying cube."

"Resembling a sketch of the original church space, the Orangery consists of a steel structure that has been covered in strong plastic – specifically a type of ’shrink wrap’ developed to protect cars, boats and other large objects. Inside this space is a living orangery where citrus plants hang from the dome. This reinterpreted orangery fuses a classic shape with our current high-tech world; a world full of materials that are not intended to be beautiful, but purely to meet specific utilitarian needs."

"The CO2 pavilion is a horizontal volume of light and smoke in the center of the courtyard enhancing its proportions as well as the symmetrical geometries of the paved courtyard where the pavilion stands."

"It is composed of twenty-six square-sectioned frames tied together through the simple use of bolts and nuts in a system of 3 different modules that encloses a portion of open space into an inner patio open to the sky." 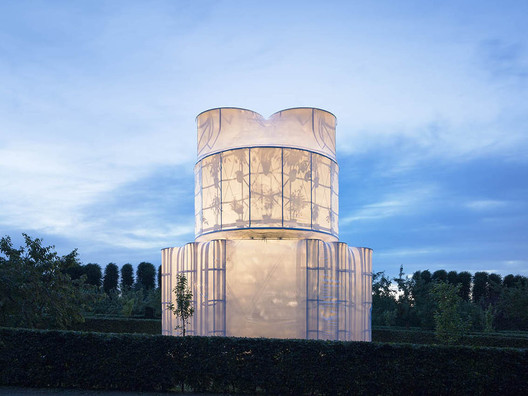