Save
Scaffolding: From Auxiliary Equipment to Primary Function
Share
Or
Copy

Little has been said about the contribution of scaffolding to the history of construction. These structures are generally treated as mere equipment and, as a result, their records are very scarce. Without scaffolding, however, it would be almost impossible to construct most of the buildings we know. Scaffolding allows workers to reach and move materials at difficult points in a construction, providing safety and comfort. But in addition to its role as a support structure for buildings, we have also seen that scaffolding can be used for mobile, temporary, and even permanent structures. Below, we explain its history and possibilities for use.

It is estimated that scaffolding was first used around 17,000 years ago in the Paleolithic period. Holes in the walls in caves in southwestern France, which presumably fixed these support structures, suggest that rudimentary scaffolding helped our ancestors make cave paintings [1]. Another important record of use dates to 1450 BC in Egypt, wherein Egyptian paintings illustrate the construction of an obelisk with the aid of scaffolding [2]. There is also documentary evidence that the Egyptians used wooden scaffolding to build the pyramids.

Like wood, bamboo is widely used for the construction of scaffolding, especially in Asia. As we have already discussed here, bamboo is a highly structurally resistant material for tensile and compression efforts, and it grows very quickly and can be harvested and used easily. The connections between bamboo trunks can be tied using vegetable or plastic ropes.

In fact, the junction between the scaffolding pieces was for a long time its primary weakness, an issue that required considerable time during assembly. An important actor in this history was Daniel Palmer-Jones, who with his brother set up the Patent Rapid Scaffold Tie Company Ltd in England. In 1911, they patented a set of fixings for wooden logs and metal tubes that were being introduced to the market at the time. The solution was called rapid scaffixers and used iron chains tied to small pieces embedded in the wood.

In 1923, with the advancement of metallurgy, metallic tubes became more and more common, and the same company developed other fixation systems, which are still seen on construction sites today. This system joined the tubular parts with clamps, screws, and nuts, achieving much more resistance and practical efficiency in the assembly. Another extremely important patent was the frame system, created by a construction worker who had survived a fall from a collapsed wooden scaffold. During his recovery, Reinhold A Uecker designed a steel frame that was safer and more practical than the wooden easels he used to use [2].

Nowadays, it is almost impossible to find a construction that has not used scaffolding at any stage of the work. But in addition to its traditional auxiliary use, we have seen the use of scaffolding as a primary material in some projects. Whether in pavilions, temporary structures, art installations, or even interior designs, the structural flexibility, ease of assembly, lightness, and translucency of scaffolding structures have fascinated architects.

An iconic project that used scaffolding permanently was Teatro Oficina, by Italian-Brazilian architect Lina Bo Bardi and Edson Elito. According to critic Rowan Moore, who published an article on the work in the English newspaper The Guardian, the structure was "A long, narrow space like a street in a burnt-out envelope of an old theater that is watched by a gable of galleries built with scaffolding. Teatro Oficina has challenging viewing angles, hard seats and a shape that is exactly what theaters shouldn't have, but it is all the more intense precisely for that reason." The theater's grandstands stacked on scaffolding structures remain in use 60 years after construction.

Another outstanding work, albeit temporary, was the Pavilhão Humanidade 2012, by Carla Juaçaba and Bia Lessa. Scaffolding takes on a major role, forming a structure that seems to dematerialize in its translucency, showing the movement of the public and the opaque volumes of the programs of the enormous building.

Another common use for scaffolding is to create temporary structures for meeting places, such as community centers, places for neighborhood meetings, and public spaces. As shown in this article, scaffolding allows architects to quickly compose the space by working with horizontal, vertical, and diagonal flexibility, especially combined with other materials such as fabrics, wood, polycarbonate and metal.

Like a huge assembly game, scaffolding allows architects to create solid structures quickly, erecting buildings in days or even hours. See, in this My ArchDaily folder, some projects published on ArchDaily where scaffolding is used in a leading role. 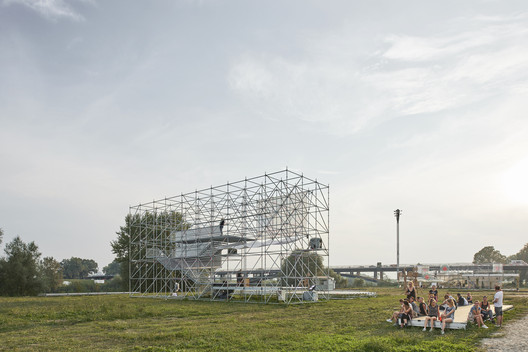